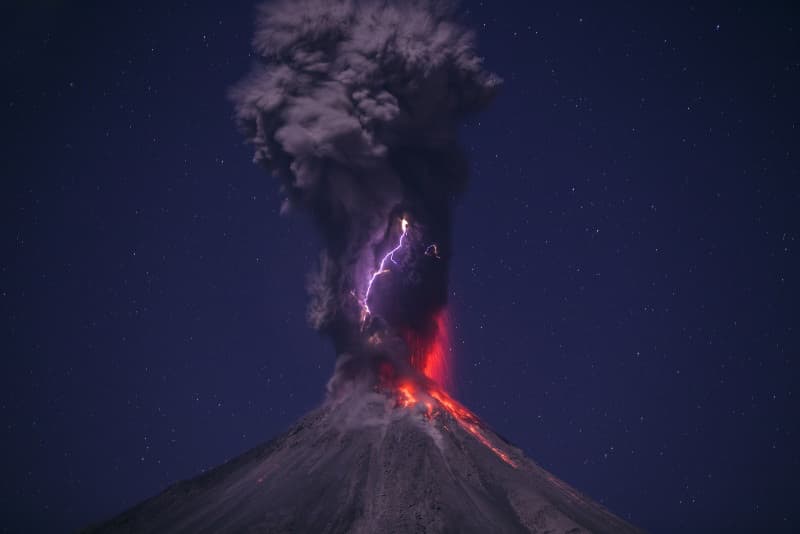 The Colima volcano in Mexico is active again, and has been spewing out large plumes of ash nearly 3 kilometers into the air. Astrophotographer César Cantú captured this spectacular picture of lightning slicing through the cloud of ash.

How can lightning strike in an ash cloud? Through friction, particles of the ash can charge each other by rubbing against each other during the eruption. When the energy is discharged, it can create lightning bolts. The Colima volcano is one of the most active volcanoes in Mexico, and is also called ‘Volcán de Fuego’ or ‘Fire volcano.’ It has erupted more than 40 times since the first documented eruption in 1576.

The latest news on this current eruption is that local authorities have put the volcano on a yellow alert, meaning the volcano is showing increased activity, and residents who live nearby should prepare for a possible evacuation. See a larger version on his website here. And scroll below to see some more amazing pictures of volcanic lightning from previous years.

There are few phenomenon on Earth as terrifying, devastating, and interesting as volcanic eruptions. Massive amounts of rock and ash soar high into the atmosphere as the Earth’s crust opens and the great forces present within the mantle are released.  Volcanic eruptions are one of the most energetic events on the planet; only a few other natural events can compare – lightning being one of them.

Read This Next
Water Life
Scientists Claim to Have Discovered the "Secret Ingredient for Building Life"
Moon Sims
Brutal Video Simulates When Earth Hit Another Planet Many Years Ago
Long Live
Giving Baby Mice This Drug Makes Them Live 10 Percent Longer
Dark Secrets
Scientists Just Detected the Oldest Dark Matter Ever Observed
Buzz Buzz
Scientists Hijack Fruit Fly Brains to Remote Control Their Wings
More on Hard Science
Total Drama Island
Sep 28 on the byte
Journal Retracts Study on Room Temperature Superconductors
Tell Us How You R...
Sep 27 on the byte
Former Particle Physicist Absolutely Annihilates the Field of Particle Physics
One Person's Trash
Sep 16 on the byte
Scientists Absolutely Thrilled to Find 150 Million Year Old Vomit
READ MORE STORIES ABOUT / Hard Science
Keep up.
Subscribe to our daily newsletter to keep in touch with the subjects shaping our future.
+Social+Newsletter
TopicsAbout UsContact Us
Copyright ©, Camden Media Inc All Rights Reserved. See our User Agreement, Privacy Policy and Data Use Policy. The material on this site may not be reproduced, distributed, transmitted, cached or otherwise used, except with prior written permission of Futurism. Articles may contain affiliate links which enable us to share in the revenue of any purchases made.
Fonts by Typekit and Monotype.