Powerful pen control that doubles as a lush screen. 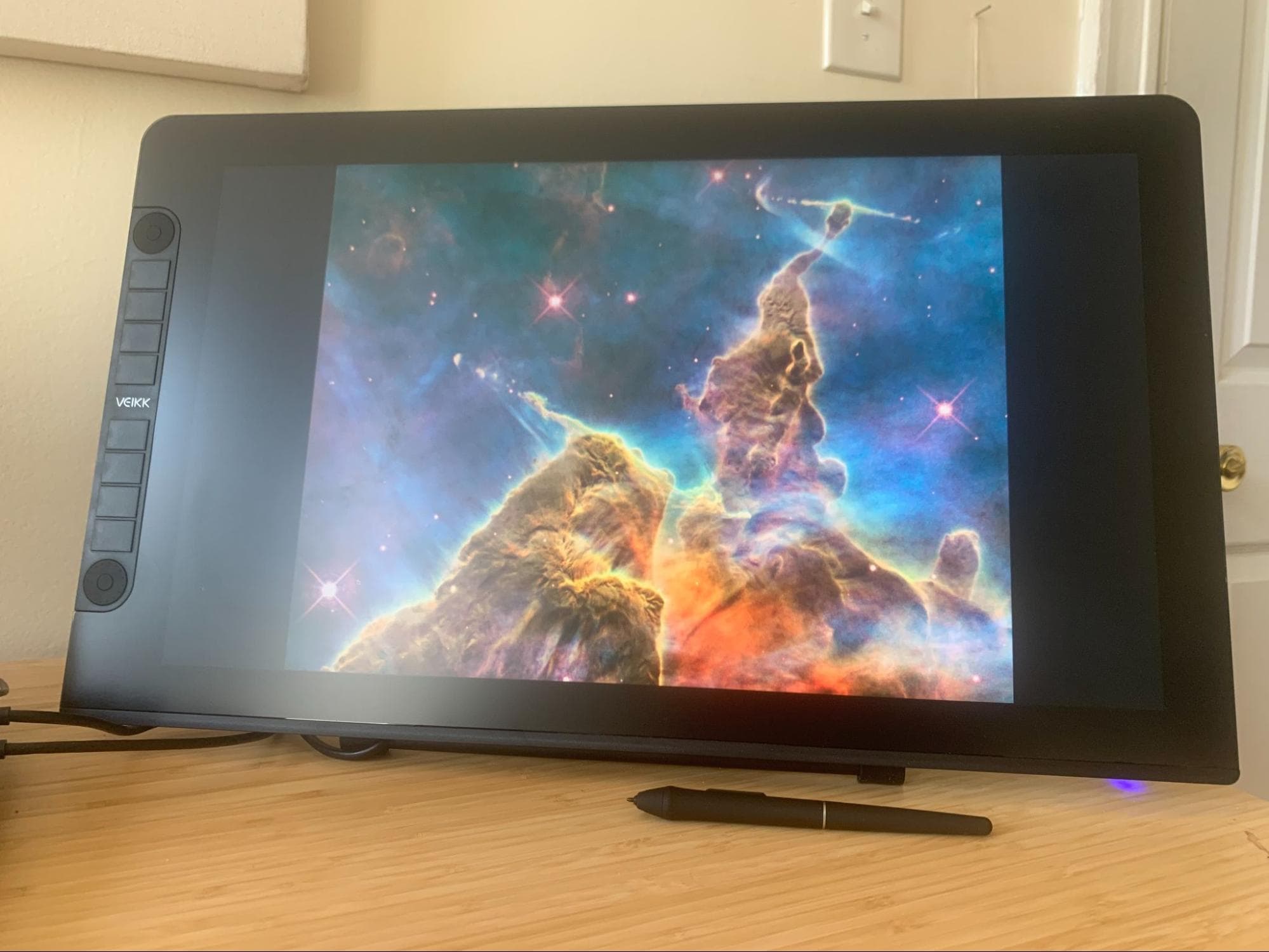 Scribble, detail, color, and sketch: pen tablets give you tactile control over the digital world in which you produce. The VEIKK Studio VK2200 Pro is one of the best-priced options out there for digital artists, and distinguishes itself from some of the competition in a few ways. As we'll explore in this VEIKK Studio VK2200 Pro Review, the device comes with an adjustable stand built right into the basic architecture of the unit. That enables your VK2200 to easily segue from a drawing tablet to a nearly 22-inch supplementary display that can be used in duplicate or extended display modes.

This powerful drawing tablet also incorporates a range of features, with good color and programmable controls, providing you with a lot for the price. Read on to find out if the VEIKK Studio VK2200 Pro is for you.

The VEIKK Studio VK2200 Pro is a pen display tablet. Plugging it into your computer, the VK2200 Pro functions as a second display for your system with a battery-free pen, control dials, and buttons on its left front.

The VK2200 has a 21.5-inch workspace, adding 1.25-inch bezels on the top, right, and bottom of the screen, and about two inches on the left which includes the VK2200’s controls. The screen is laminated with a plastic that adds a slight texture to pen contact that I found pleasing to draw on.

The screen’s rear features a box into which the power and display cords plug. This box also holds the lever that allows you to change the angle and positioning of your unit, by setting the slope of one strut. Pulling on it lets you easily adjust the tilt of the display. This mechanism also allows the screen orientation to easily convert between a 15- to 85-degree angle (or anything in between).

The screen’s left hand side features ten buttons  and two handy swivel wheels with click buttons in their center, which are all easily programmable from the device’s setup menu. By default, the device does not respond to finger touch and it is unclear whether it can be set up to do so.

The VK2200 plugs into your computer using an HDMI input in tandem with a USB-C or USB-A (both are included). I use an Asus Zenbook that includes a USB-C of average power (approximately 10 Gbps transfer speeds), which is substantially less fast than the road-runner class Thunderbolt ports you'll find on a MacBook. Connecting the tablet by USB-C to my setup, I experienced a slight lag between my mark and pen stroke when using the pen on the VK2200. However, this is similar to what I’ve experienced on other pen displays, such as the Wacom Cintiq Pro 16 (which uses the same HDMI / USB-C connection). I mention these details about my USB-C and laptop because on a system with a Thunderbolt port, there could be significantly less lag. This lag is not a deal breaker though, as it’s small enough that you’ll naturally compensate for it as you draw. In most other applications, it’s insubstantial enough to be irrelevant.

The VK2200’s screen is a mixed bag. The workspace is large and roomy for the price you pay, no doubt about it, and it’s an incredible value. If you want a big, digital drawing surface that lets you paint like you’re working on a real canvas, then this tablet definitely makes that artistry possible.

The screen’s drawbacks are also quite real, however. These days, the 1920 x 1080p resolution is pretty low for a 21.5-inch drawing tablet. Next to my 4K 14-inch laptop screen, the sharpness differential jumps at you. Icons look pixelated, and taking the display for a run in Fresco, I found some of my charcoal marks were hard to read up close. Because of this, I found myself zooming out to make sure I was detailing an edge properly — which is kind of the opposite of what you want.

The color is decent on this display. It hits 120 percent sRGB gamut, and 92 percent NTSC, which is just a little less than 100 percent Adobe RGB. The VK2200 allows for relatively easy calibration, and gets pretty bright with an adjustment of the slider. The white balance feels a hair yellow with factory calibration, but perhaps with a colorimeter it could get closer to a truer white.

My version of the VK2200 in particular suffered from a few unfortunate defects, too. I could count a handful of dead pixels, and there’s also some pretty obvious light bleed from the top right of the IPS display, a type of LED panel. While this will vary from monitor to monitor, it does hint at a lack of quality control. Still, for the affordable price….

As I learned during this VEIKK Studio VK2200 Pro review, the pen that’s used by this monitor is quite similar to the one you’ll find on a Wacom Cintiq Pro. It uses a plastic nib, which VEIKK supplies you with numerous identical replacements for (I counted 17), and features one button on the side. They claim 8,192 pressure sensitivities, and it feels like that number could be fair. In Fresco, I felt like the pen could be more responsive when I held it low and used it in a scrubbing motion as a shader, but it seemed to cut out sometimes when I would try to make such marks. That said, the device did a good job at sensing pressure and marks otherwise. Oddly, as I drew with the pen and applied heavier pressure, it seemed to subtly distort the coloration of the screen area right around the mark, making a sort of purple aberration in the way the device displays color. While it didn’t bother me as I worked, it did make me worry a bit about the long term quality of this screen.

The programmable buttons on the side of the display are pretty excellent, however. While they made little noise when I used them, they had a satisfying clickiness. The bottom zoom wheel is particularly nice, as its interior button allowed me to swap between zoom and scroll by default, as well as a pen zoom. With a little programming the side controls should have enough control for most serious Adobe users or ZBrush heads.

In Fresco and Photoshop, where I tested the VK2200, I did miss some of the touch controls that are available in Procreate on my iPad Air. I still think that Procreate’s intuitive pinch zooms and touch rotates lead the pack for digital painting, however, the VK2200’s interface does do a good job overall and is a better value than the far more expensive Wacom Cintiq Pro 16.

During this VEIKK Studio VK2200 Pro review, I found that my favorite thing about the VK2200 is its ability to transition from a horizontal drawing tablet on your desk to a large second monitor. The rear housing for the moving joints and the lever that locks them feels a little cheap to me and I worried about their longevity, but for the moment, they did a really great job and added a new dimension to this pen display. Swapped into extended display mode, the VK2200 is a solid productivity addition to your computer array, that then transitions into a capable studio pen display with the simple pull of a lever. Because of this, folks who don’t use their pen display every day might incorporate it into their desk as a second monitor, sliding it down when they want to draw, rather than having to make space for a monitor which they bring on and off the desk when they’d like to work.

While the VK2200’s resolution isn’t the best, the colors are good, and in vertical mode I find myself enjoying it for videos, games, and entertainment, as well as for work. This puts it in a bit of a different class from something like the Cintiq Pro, which is relegated to digital art tasks only due to its low on-table angle (that is unless you invest in one of Wacom’s pricey mounts).

For digital drawing and painting, however, I think that the VK2200 isn’t as good as the Wacom Cintiq Pro 16, or an iPad Air or Pro. Its resolution is simply too low for detailed drawings on the large screen size, and the image isn’t close to as sharp as the Cintiq Pro’s. And while it does a good job, the pen doesn’t seem to track quite as well as the Wacom’s. Compared to an iPad, it lacks some of the intuitive touch gestures that make drawing and painting in Procreate so smooth. Don’t get me wrong though, it’s still good. The resolution can be worked around, and I could see some very good work being made on this device.

The VEIKK STUDIO VK2200 Pro can be thought about in a couple of ways. As a “pro” level drawing tablet, it does a middling job, offering good value with decent color, solid control, and a responsive, large workspace, albeit with poor resolution and a few quirks and oversights. I wouldn’t really call it a “pro” drawing tablet, though pros could use it and make great work.

However, if you’re looking for value rather than pro-grade tech, the VK2200 is actually pretty great. This pen display isn’t cheap, per se, but it competes with Wacom displays that cost roughly $1,000 more and can outperform them in a few areas. And while I don’t think it beats out an iPad Air in terms of digital painting control, it does sync right into a desktop workspace for software that an iPad can’t touch. So, users that want full control over the whole Adobe Suite, or want to use the tablet with ZBrush, will see the benefit immediately.

In the end, the VK2200 Pro is a great mid- to low-end pen display that can double as a solid second monitor for a laptop or desktop rig. The VK2200 could use better quality control where dead pixels and light bleed are concerned, and it could definitely benefit from a better resolution. But, if you’re looking for a good deal on a large pen workspace, then this is it. At the VK2200’s price point, its few deficiencies are more than made up for by its giant screen space, good color, easy tilt controls, and solid pen.