New Stretchable and Transparent Heater Made from Metallic Glass 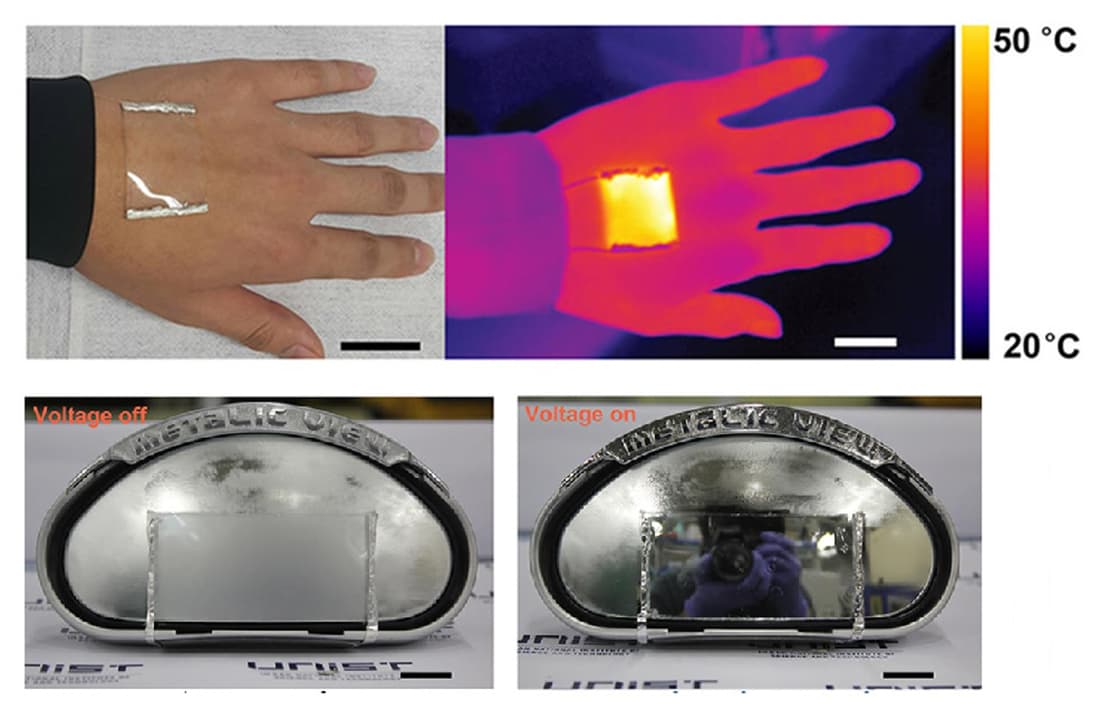 Researchers from the Ulsan National Institute of Science and Technology (UNIST) in South Korea have developed a stretchable and transparent electrode using metallic glass. The device can be used in heating body parts and defrosting glass or side mirrors on vehicles. Metallic glass is a metal that has an amorphous (disordered) structure like that of a glass, instead of the highly ordered crystalline structure that metals normally have. The device is the first stretchable electronic made from it. The research is published on the journal Nano Letters

The first report of amorphous metal or metallic glass was in 1960. However, they have not been widely commercialized. Besides the high cost and difficulty processing, researchers have struggled to find a valuable enough application for the material. This new study however shows that metallic glasses have several properties that make them appealing for wearable electronics. These include inherent flexibility, transparency, and stability under hot and humid conditions.

Source: Byeong Wan An, et al. Fabrication process of the metallic glass made of a copper-zirconium nanotrough network, which is eventually embedded in a silicone substrate.

For the metallic glass, researchers used a copper-zirconium alloy. A tangled web of the two metals was created by depositing them onto a sacrificial polymer web scaffold. The resulting metal web called "nanotrough network" can then be transferred to a flexible and transparent substrate. As the metal is also conductive, it can also be used as an electrode. The metallic glass web was embedded into polydimethylsiloxane and connected to a voltage. The stretchable, transparent heating pad could be heated up to 180 °C (356 °F) while being stretched to more than one-and-a-half times its original length with negligible changes in resistance. A program was also designed to allow a user to wirelessly control the temperature with their phone, demonstrating how the device could be used as a skin patch for thermotherapy. The researchers are currently working on developing mass production systems for commercializing the new electrode.

Read This Next
Futurism
New Soft Robotic Skin Automatically Heals Itself, Even If You Shoot It Full Of Holes
Futurism
Customized "Exosuits" Will Move With Your Stride
Futurism
Hundreds of 2D Materials Could be the Next Graphene
Futurism
This "Self-Healing" Thread Can Alternate Between Firm and Flexible
Futurism
Scientists Just Engineered Transparent Wood
More on Robots & Machines
Blow Up Doll
Monday on the byte
Ukraine Accuses Russia of Using Inflatable "Dummy Tanks," Which Deflated
From the Dept. of...
Monday on futurism
The Best UPS Battery Backups of 2023
FROM THE DEPT. OF...
Jan 29 on futurism
The Best Netgear Routers of 2023
READ MORE STORIES ABOUT / Robots & Machines
Keep up.
Subscribe to our daily newsletter to keep in touch with the subjects shaping our future.
+Social+Newsletter
TopicsAbout UsContact Us
Copyright ©, Camden Media Inc All Rights Reserved. See our User Agreement, Privacy Policy and Data Use Policy. The material on this site may not be reproduced, distributed, transmitted, cached or otherwise used, except with prior written permission of Futurism. Articles may contain affiliate links which enable us to share in the revenue of any purchases made.
Fonts by Typekit and Monotype.