Is This Startup Working on an Actual Warp Drive?

We've never been closer to traveling near the speed of light. 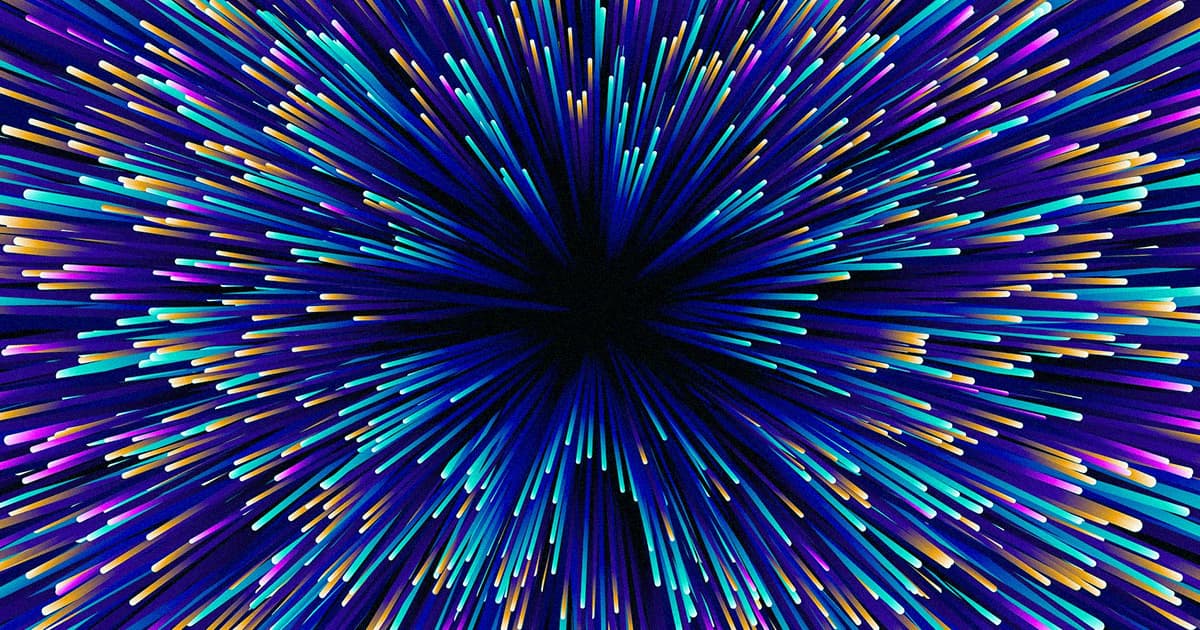 THE CLOSEST NEIGHBORING STAR TO OUR SUN, a small red dwarf called Proxima Centauri, is about 4.24 light-years from Earth.

That might not sound like much — but even for one of the fastest spacecraft ever built by mankind, NASA's interplanetary traveler New Horizons, it'd take more than 78,000 Earth years to travel there at top speed. If we ever want a chance of traveling to other parts of our galaxy, we're going to have to go a lot faster than that.

One potential workaround would be a "warp drive," popularized by the science fiction franchise "Star Trek," which would bend the fabric of spacetime to achieve travel at the speed of light — or even, possibly, faster.

For the most part, warp drives have remained confined to the realm of sci-fi. But now — perhaps, and with numerous caveats — that may be starting to change.

A pair of researchers associated with a little-known startup called Applied Physics recently published a paper, accepted into the peer-reviewed journal Classical and Quantum Gravity, suggesting that actual warp drives could be "constructed based on the physical principles known to humanity today."

Alexey Bobrick, a PhD student from Lund University in Sweden who co-authored the paper, admits that an immense amount of work is still needed before the idea could ever be practical.

"Simply put, a lot would still need to happen," Bobrick said in an email. "Before our paper, the validity of warp drives technologically, given the science we know, was completely out of the question. Now it’s just extremely difficult, but doable."

"Just because we have the mathematical understanding of how to achieve something, that does not mean we have the engineering ability," he added.

The ambition, though, seems real. Bobrick likened the current moment to the calculations done by NASA scientists in the early 1960s, which set the groundwork for Neil Armstrong's "one giant leap for mankind" as he stepped onto the Moon in July 1969.

The idea, which Bobrick fleshed out in the paper with Gianni Martire, a tech entrepreneur who founded Applied Physics, builds on an existing concept first brought forward by Mexican theoretical physicist Miguel Alcubierre in the early 1990s. His Alcubierre Drive, a purely speculative warp drive, could theoretically allow a spacecraft to travel faster than light by contracting space in front of it and expanding it behind.

There's one big problem, though. The Alcubierre Drive would require negative energy to work, and negative energy probably doesn't exist — or, at least, it isn't accounted for by today's models of physics.

But in their new paper, Bobrick and Martire suggest that some tweaks to the Alcubierre Drive could make it possible — without the need for negative energy. The catch is that, unlike the Alcubierre Drive, it would be able to go fast, but no faster than the speed of light.

In fact, "we can now construct a warp drive that does not require negative mass and can be built with ordinary matter," Bobrick told Futurism. "Thus we have made warp drives physical and thus have built the foundational math for warp field mechanics."

Harold White, the Advanced Propulsion Team Lead for the NASA Engineering Directorate and a longtime researcher of Alcubierre Drive-like concepts, told Futurism that he isn't quite convinced by Applied Physics' paper — though, he said, the ideas in it could still have merit.

"In the end, my view is that some of the same problems remain," White told Futurism after reviewing the paper, "so it is still to be determined if one might ever be able to implement the idea of a space warp."

Rather than claiming outright that their drive can surpass the speed of light, Bobrick and Martire suggest the physical warp drive could be used to travel at subluminal speeds — but still orders of magnitude faster than conventional propulsion systems that exist today.

White called subluminal warp a "very appealing idea," adding that if "one could achieve large fractions of the speed of light, then it might be possible to visit some of our stellar neighbors in decades rather than centuries. No small achievement!"

Joseph Agnew, graduate research assistant at the University of Alabama with a penchant for warp drives, would tend to agree.

"Subluminal speeds are how we've explored the galaxy thus far, it just depends on the degree to which we're talking!" he told Futurism in an email.

"A good point of reference is to assume that the maximum subluminal speed is 0.99 times the speed of light (particle accelerator speeds), which you generalize to '1' for napkin calculations."

That would mean, at maximum subluminal speeds, visiting the Alpha Centauri system would still result in a "9+ year round trip time for the astronauts in that spaceship, not accounting for time dilation effects and other relativity-based phenomena," according to Agnew.

Other galaxies, however, or more distant parts of our own, would still require a far speedier craft.

"For example, the nearest major galaxy (of many, many galaxies) is Andromeda, which is 2.5 million light years away," Agnew explained. "So if you'd like to take a vacation to Andromeda, or perhaps move there, like a settler in the old west, it would take you a year to get there at the superluminal speed of 2.5 million times the speed of light!"

To Sabine Hossenfelder, German author and theoretical physicist, Bobrick and Martire's physical warp drive makes a lot of sense and could be a sensible extrapolation of Alcubierre's foundational work.

Bobrick and Martire's warp drive is "basically a bubble," she explained in a YouTube video about the paper. "It has an inside region, which they call a passenger area."

Inside this region, spacetime is unchanging, meaning that there aren't any changes to gravitational forces inside of it.

Here's where the proposed physical warp drive concept gets even wilder: time passes differently inside this bubble when compared to the outside.

"You cannot break the speed of light barrier for the passengers themselves, relative to spacetime," Hossenfelder explained. "So instead, you keep them moving normally in the bubble, but then you move the bubble itself superluminally."

That could lead to some mind-bending phenomena.

The drive "may slow down the time for the passengers inside it," Bobrick told Futurism. "In principle, by quite a lot. In other words, the passengers will not age fast while they travel, even if they travel slowly and far."

The physical warp drive would work best if passengers were seated next to each other, kind of like a wide disk sailing through space, moving with its face forward. That's largely due to the fact that you'd need less energy to get going.

"The flatter it is in the direction of travel, the less energy you need," Hossenfelder said.

But before we stuff space travelers inside a pie-shaped pod and blast them off in the direction of Proxima Centauri at the speed of light, we still have plenty of other challenges to overcome.

Assuming the research holds up, there would be the immense challenge of actually building a warp drive based on the work.

"It's very much a case where it's an interesting concept and will have to be poked and prodded to figure out if it holds in all cases or if certain assumptions are valid," Agnew told Futurism. "I like the approach [Bobrick and Martire] took and the paper is well-referenced, but as usual, it's always important to retain a healthy dose of scientific skepticism."

Another challenge may be financial. Although Applied Physics' goals are lofty, it's not clear how much funding it has — and both Bobrick and Martire were evasive about the business side of the startup.

"Everything about Applied Physics" can be found on the company's about website, Bobrick said. "No other information about AP will be made to the public at this time," he added.

Martire declined to say whether the company was working on a prototype of the actual warp drive.

"Unfortunately at this time, we cannot make any further comments," Martire wrote in an email in which he pointed to a mysterious "More surprises soon..." link on Applied Physics' website, and made an off-the-record comment.

Still, there are moments when it sounds as though Bobrick and his collaborators are imagining a near-term future in which warp travel could be possible. At one point, Bobrick suggested that the tech would be best implemented in small craft than in "massive starliners," a strategy that he speculated could "start a new age of research, a warp age."

It's impossible to say, knowing what we currently do, whether Applied Physics is onto something. But perhaps, by taking inspiration from science fiction and daring to dream, humanity actually does stand a chance of finally venturing beyond the farthest reaches of our solar system.

More on warp drives: Professor: Progress Toward Warp Drive Has Been “Enormous”

Read This Next
Warped Perspective
Scientists Propose Method for Detecting Alien Warp Drive Activity
Weird Science
The U.S. Secretly Funded Research on UFOs, Wormholes, and Warp Drives
Futurism
China Claims They Have Actually Created an EM Drive
Futurism
Here's Everything You Wanted to Know About the Cosmos
More on Off World
Trashing Orbit
Yesterday on the byte
Elon Musk Says SpaceX May Build Starship That Dies on Purpose
Cat and Mouse
Yesterday on the byte
SpaceX to Launch "Hunter" Satellites for Targeting Rival Spacecraft
Space In Space
Yesterday on the byte
NASA Official Admits There's a Bit of an Issue on the Space Station
READ MORE STORIES ABOUT / Off World
Keep up.
Subscribe to our daily newsletter to keep in touch with the subjects shaping our future.
+Social+Newsletter
TopicsAbout UsContact Us
Copyright ©, Camden Media Inc All Rights Reserved. See our User Agreement, Privacy Policy and Data Use Policy. The material on this site may not be reproduced, distributed, transmitted, cached or otherwise used, except with prior written permission of Futurism. Articles may contain affiliate links which enable us to share in the revenue of any purchases made.
Fonts by Typekit and Monotype.