Play a physical game of chess against AI or other players around the globe. 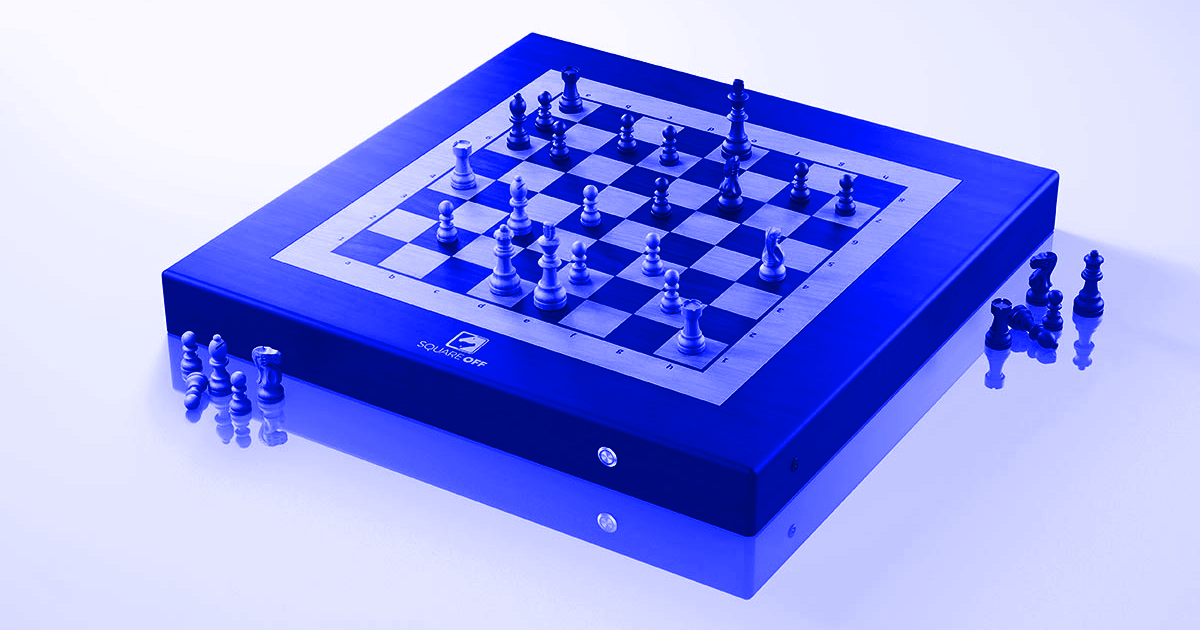 With many products, you have a choice between digital and analogue. You can get an analogue watch with a dial and moving hands, or you can get smart watch with a digital touchscreen. You can read a physical book made out of paper and cardboard, or you can read a digital copy on your e-reader or tablet. You can play the vinyl LP of your favorite band’s new album, or you stream it on your phone. Generally speaking, there are not a lot of gadgets that let you have it both ways. However, in a bit of cool news for chess enthusiasts, one gadget that does combine both digital and analogue is the Square Off Chess Set.

When it comes to chess, playing online obviously has a ton of advantages over playing on an analogue board. For starters, you’re selection of opponents is essentially unlimited. Thanks to computers and the Internet, you can find either a real, human opponent or an AI opponent literally any time you want, day or night. And, provided you have access to the web, you can play anywhere you want, whether you’re standing on a crowded bus or sitting in your own bathroom.

On the other hand, while playing chess online may be extraordinarily convenient, it does come at a cost. As anyone who grew up playing the game on an old-fashioned chess board knows, there is simply nothing like the beauty and the feel of actual pieces.

That’s where the Square Off Chess Set comes in.

Square Off made a pretty big splash at CES 2019 back in January, and it’s not hard to understand why.

Who are your opponents? Well, that’s the best part.

With Square Off, you can play the advanced AI, which features 20 difficulty levels ranging from beginner to grand master. Or, if you want a human opponent, you can connect the Square Off to your smartphone or tablet, and from there you can play any of the 24 million human players on Chess.com using the Chess.com mobile app.

The Square Off is currently available in the 19x19 inch “Kingdom Set” edition, or in the slightly wider “Grand Kingdom Set” edition. As you would expect, given the tech involved, neither of them is cheap. However, if you’re a serious chess player, and you want the tactile and aesthetic experience of a traditional board with the convenience online play, the Square Off Chess Set is worth every single penny.

Read This Next
I Silence Thee
Leaked Messages Seem to Show Elon Musk Using Twitter to Punish His Enemies
Going Wireless
Hackers Took Over a Subdomain of Wired.com for Several Months and Replaced It With Sleazy Online Casino Content
Heating Up
Employees at TikTok Apparently Have a Secret Button That Can Make Anything Go Viral
Nothing's Real Anymore
JPMorgan Says Startup Tricked It Into an Acquisition by Cooking Up Millions of Fake Users
Enemy Mine
Elon Musk Now Denies That His Family's Emerald Mine Existed, In Spite of Previously Bragging About It
More on Future Society
Gas Giant
Jan 27 on the byte
Journalist Eats Lab-Grown Chicken, Gets "Weirdly Gassy"
Musk Rats
Jan 26 on the byte
Twitter Is Quietly Re-Suspending the Lunatics Elon Musk Let Back On
Spreadsheet Guy
Jan 24 on the byte
Sam Bankman-Fried Posts Excel Docs That He Says Shows Nothing Was His Fault
READ MORE STORIES ABOUT / Future Society
Keep up.
Subscribe to our daily newsletter to keep in touch with the subjects shaping our future.
+Social+Newsletter
TopicsAbout UsContact Us
Copyright ©, Camden Media Inc All Rights Reserved. See our User Agreement, Privacy Policy and Data Use Policy. The material on this site may not be reproduced, distributed, transmitted, cached or otherwise used, except with prior written permission of Futurism. Articles may contain affiliate links which enable us to share in the revenue of any purchases made.
Fonts by Typekit and Monotype.