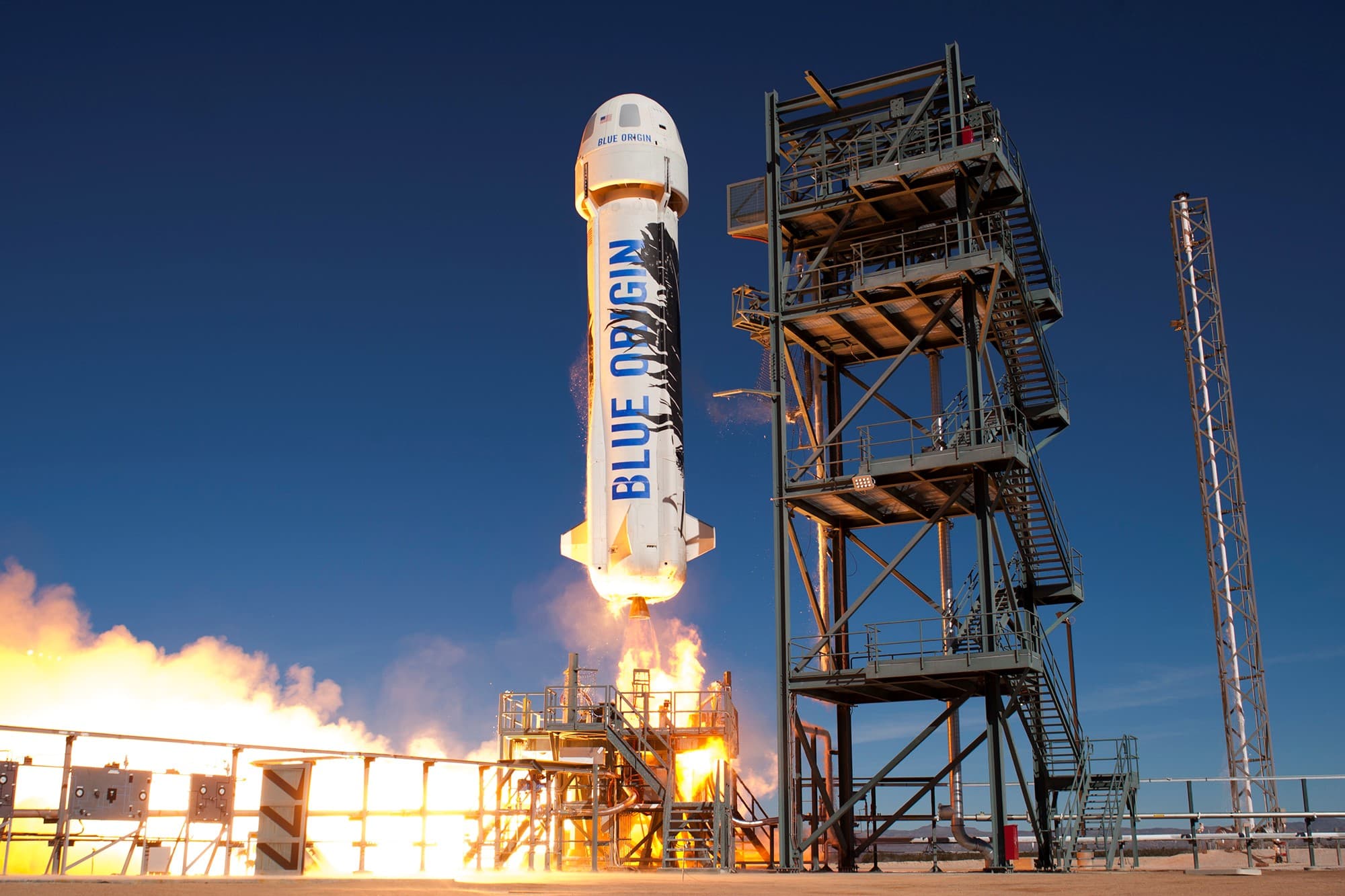 On Friday, January 22, Blue Origin—the private space company founded by Amazon CEO Jeff Bezos—managed to successfully launch and land its New Shepard reusable rocket, and in so doing achieved a record in the history of private spaceflight: It was the first time the same rocket had done so twice.

It was, by any measure, a tremendous accomplishment, and a cause for rejoicing to those who have eagerly followed the rapid advances in the private space industry.

Even so, there were many who insisted on resolving this extraordinary achievement into a petty competition between rival egos—Jeff Bezos of Blue Origin on the one hand, and Elon Musk of SpaceX on the other, whose company is also pursuing reusable rocket technology.

It’s an understandable impulse.  The image of billionaire playboys (usually dot-com pioneers of the ’90s) lavishing their money on vanity space companies has become so commonplace in recent years that it’s almost an in-joke.

And the principals involved haven’t helped much either, engaging in a petulant back-and-forth on Twitter during the past few months, belittling each other’s achievements in reusable rocketry—an episode that had more than a faint whiff of locker room towel-snapping to it.

The Competition That Never Was

Yet the real competition for these companies is not with each other, but with the economics of spaceflight itself.  The dream of a fully reusable spacecraft is an old one, dating back to the science fiction stories and comic strips of the interwar period.

The first real stab at making it a reality was, of course, NASA’s Space Shuttle, although that was only a partially reusable space vehicle.

But the notion that a reusable rocket is a mere gimmick, a stunt intended to swell the egos of billionaire entrepreneurs, is short-sighted and foolish.  If private space enterprise is to survive, let alone thrive, a fully reusable spacecraft is absolutely critical. The exorbitant costs of delivering a payload to orbit mean that a viable space company cannot afford to discard its vehicle after each launch.

Only large national governments have the resources to underwrite such a waste—and even they would rather not do it.

So the beauty of this “competition” between SpaceX, Blue Origin, and whatever other company is willing to wade into the fray, is that it will virtually guarantee us a reusable spacecraft, and sooner rather than later.  The argument over whether the rockets that have been successfully landed are orbital or suborbital doesn’t matter a whit—it’s enough that the technology is being tested and has been found good and all experiments help increase our knowledge and understanding.

Everything else will follow from there. And while the petty "haha, I one upped you!" arguments between SpaceX and Blue Origin are fun, they are only fun in the way that reading a tabloid is fun—it makes you feel dirty and like you've wasted a small portion of your life.

In the end, the real beneficiaries are neither Elon Musk nor Jeff Bezos, but we spectators who look on from the sidelines—in other words, everybody benefits.  The intellectual temperature increases, the pace of activity quickens, the learning curve grows steeper, and the road to the stars becomes a surer thing.

Racing Toward a Recyclable Rocket

Meanwhile, the dirty, thankless work of designing a successful reusable rocket continues.  Blue Origin has launched and landed its New Shepard twice now. In December 2015, a SpaceX Falcon 9 rocket returned from orbit and stuck the landing beautifully at a launch pad in Cape Canaveral.

A further ambition for SpaceX is to achieve landings on automated “drone ships” in the middle of the ocean. A recent attempted landing was a failure, but the good work will continue, and will eventually be successful.

Very soon, we may imagine that no private space company worth its salt will be without a fully reusable spacecraft, and the astronomical costs of getting stuff from down here to up there will decrease dramatically.  Then the field’s likely to become very crowded indeed, and SpaceX and Blue Origin will have a great deal of company in their pursuit of new space “firsts.”

After all, there’s plenty of room up there for everyone.

Read This Next
Overview Effect
William Shatner Says His Space Trip Left Him With a Feeling of Terrible Grief
Makeover Scene
Space Tourist Says He's Thinking About Flying SpaceX Craft Up to Fix Hubble
Grain of Salt
There's a Huge Problem With Elon Musk's Promise to Bring Starlink to Iran
Sluggo Mode
SpaceX Has a Major Problem With Its Starlink Internet Connections
Dumpster Fire
SpaceX Tested Starship's Engines and Accidentally Caused a Large Fire
More on Off World
I Don't Like This...
8:49 PM on the byte
Fun Website Lets You Simulate an Asteroid Impact in Your Hometown
TTFN
Yesterday on the byte
Skkrt! NASA's Orion Heads Back to Earth, Leaves Moon in the Dust
Icy Comet Eruption
Yesterday on the byte
Astronomers Spot Volcano Erupting on a Distant Comet
READ MORE STORIES ABOUT / Off World
Keep up.
Subscribe to our daily newsletter to keep in touch with the subjects shaping our future.
+Social+Newsletter
TopicsAbout UsContact Us
Copyright ©, Camden Media Inc All Rights Reserved. See our User Agreement, Privacy Policy and Data Use Policy. The material on this site may not be reproduced, distributed, transmitted, cached or otherwise used, except with prior written permission of Futurism. Articles may contain affiliate links which enable us to share in the revenue of any purchases made.
Fonts by Typekit and Monotype.