Remember when we could still dream about the distant future? 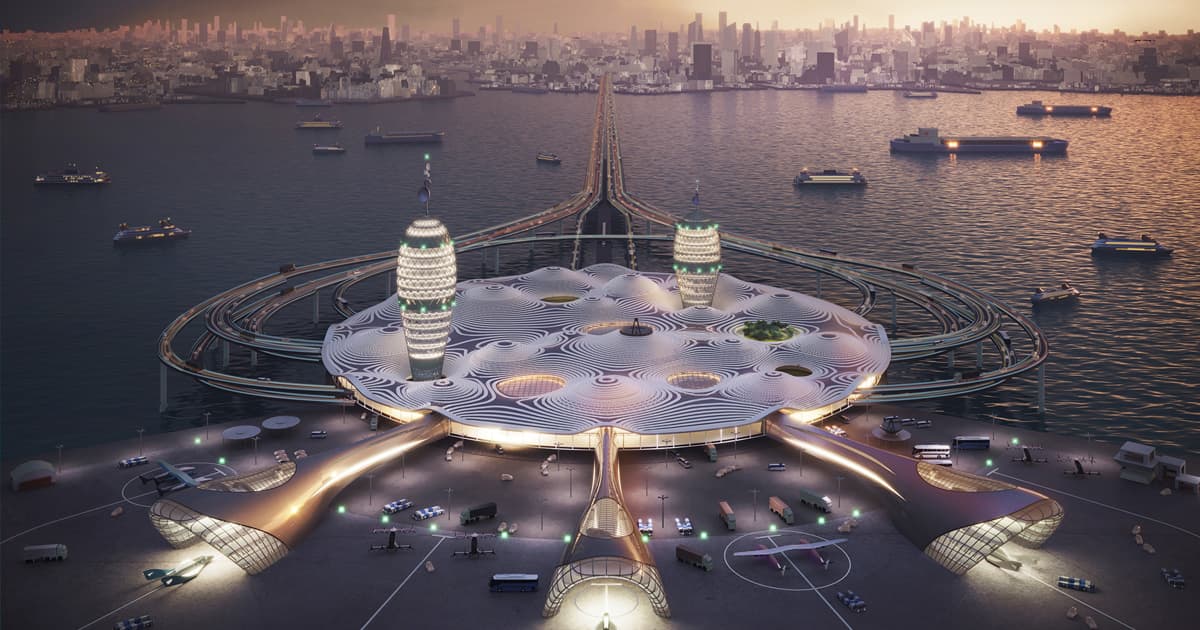 A team of Japanese architects, under the "Space Port Japan Association" (SPJ) banner, have designed a breathtaking concept for a futuristic, four-story spaceport, meant to float just off the shore in Tokyo Bay.

The concept, called "Spaceport Japan," echoes the layout of a traditional airport — except that spaceplanes, not commercial airliners, dock at various different gates. There are even drop-off and pick-up lanes via roadways that connect the spaceport to the mainland.

A solar panel layer "hovers" over the structure, allowing for the placement of patios, open-air gardens, and "even farmlands in various scale, while providing covered public space for people and other means of personal mobility," a description by architecture firm Noiz Architects reads.

Two towers will pierce through this solar panel layer, each dedicated to departures and arrivals, ensuring that the port will be "recognizable from far away."

Upper levels will allow passengers to view the departure of various spaceplanes, which will take passengers on a two-hour space shuttle experience into orbit.

The spaceport will provide real estate for space-based research and business.

The site will also make sure passengers are entertained and catered to with a hotel, art museum, gym, aquarium, and even cinema.

So far, Spaceport Japan is not much more than a beautiful computer render — but SPJ is hoping to turn the concept into a reality "as soon as possible" to expand the country's space industry.

READ MORE: This floating spaceport in Japan could bring space travel to the city [CNN]

Read This Next
Robot Cried Wolf
Japanese Town Installs Red-Eyed Robot Wolf to Scare Off Bears
Futurism
An Artificial Meteor Show May Light The 2020 Tokyo Olympics
Futurism
Japan Unveils Its First Stealth Fighter
More on Sci-Fi Visions
Human v. Giraffe
Tuesday on the byte
Chaotic Italian Fashion Line Baffles Facial Recognition Software
Step One
Tuesday on the byte
World’s Third Richest Person Says He’s Developed "Addiction" to ChatGPT
FROM THE DEPT. OF...
Tuesday on futurism
The Best Places to Buy A Laptop in 2023
READ MORE STORIES ABOUT / Sci-Fi Visions
Keep up.
Subscribe to our daily newsletter to keep in touch with the subjects shaping our future.
+Social+Newsletter
TopicsAbout UsContact Us
Copyright ©, Camden Media Inc All Rights Reserved. See our User Agreement, Privacy Policy and Data Use Policy. The material on this site may not be reproduced, distributed, transmitted, cached or otherwise used, except with prior written permission of Futurism. Articles may contain affiliate links which enable us to share in the revenue of any purchases made.
Fonts by Typekit and Monotype.