Creating a Space Force Could Trigger an Off-World Arms Race

We don't know how war in space will look. But establishing a Space Force ensures it'll happen. 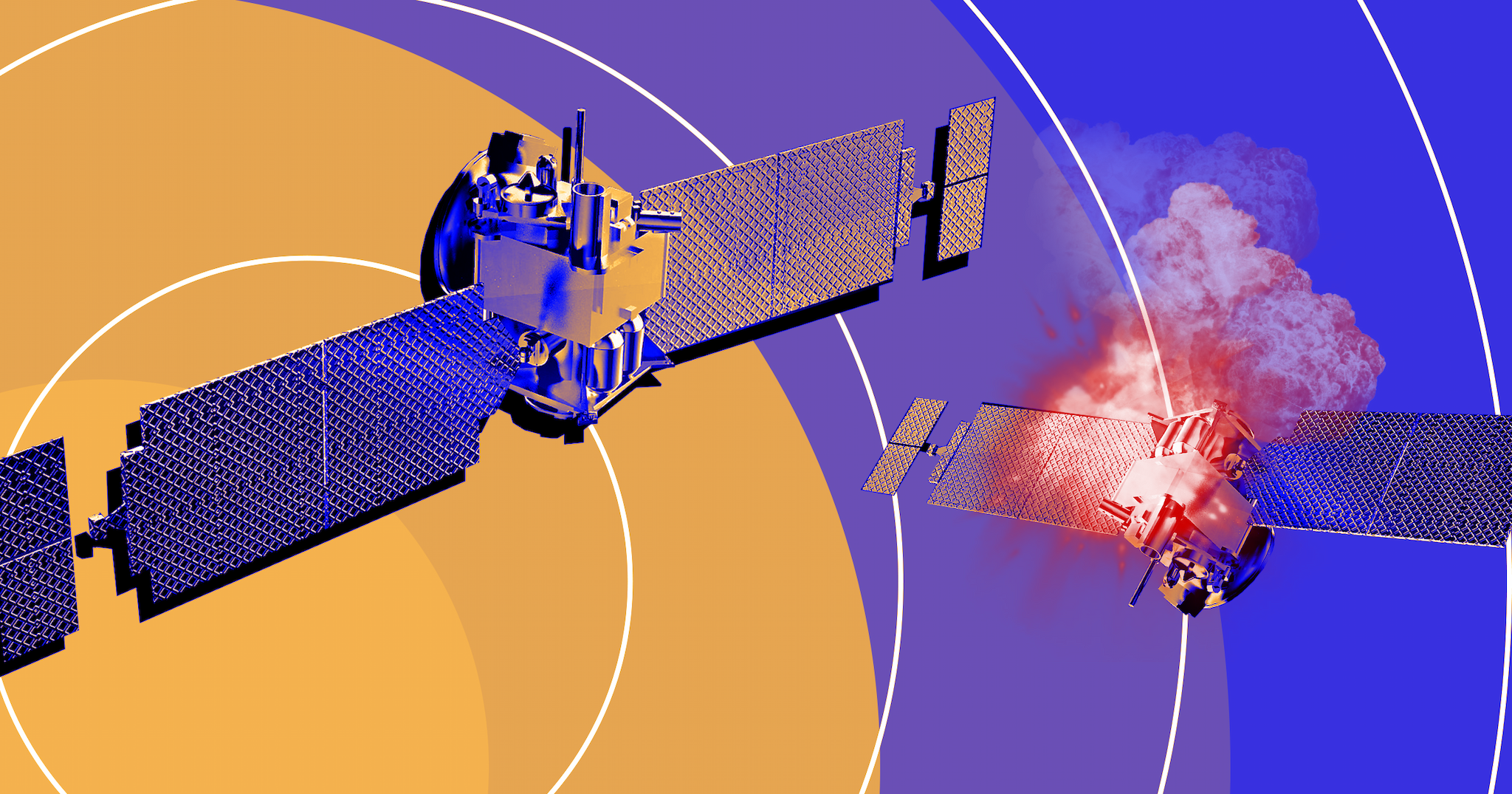 A small LED starts flashing in a dark room crowded with server racks, desks, and office chairs. On a glowing wall of monitors, lines of hundreds of tiny dots appear, mapping out the trajectory of a satellite currently orbiting the Earth. "It's Kanopus-V-IK again," mumbles a bored Space Force surveillance specialist. "It's getting too close for my liking. Should we engage the jammer again?"

Outer space is no longer a mysterious place onto which we can map our aspirations. It's never been cheaper and easier to launch a satellite into space. But in our effort to improve life on Earth and observe what we can of the cosmos, we've littered the space around our planet with growing quantities of junk.

The space surrounding Earth is getting so crowded that countries like the U.S., Russia, and China are starting to wonder who it will actually end up belonging to, and what they'll have to do to keep control over it (yes, we have outer space treaties saying that it belongs to everyone, but who cares).

Countries are starting to wonder who will actually own space, and what they'll have to do to keep control over it.

And so, the idea of the Space Force was born.

"Space is a war-fighting domain, just like the land, air and sea," President Donald Trump told an audience of Marines in March.

For international relations, the creation of the world's first Space Force might be a disaster. It sets the stage for what some are already referring to as the "space arms race."

Space Force all the way!

The U.S. has been obsessing over how to militarize space since at least the Cold War.  For instance, "Rods from God" or Project Thor was a conceptual weapon inspired by 1950s science fiction that would fling tungsten rods from outer space at ludicrous speeds at unsuspecting enemies on Earth below. According to Popular Science, this unhinged concept resurfaced in an official Air Force document from 2003, referencing "hypervelocity rod bundles" in its list of possible space-based weapons.

There'd be no pew-pew handheld laser guns shot at individuals inside gleaming white spacecraft, no fighter jets and death stars. Instead, the Space Force is more likely to involve engineers clicking away at lots of screens.

But details on what a Space Force will actually look like, or even do, are scant. In a speech earlier this month, Vice President Mike Pence a four action plan to establish the Space Force, including the creation of a Space Command and an Operations Force made up of high-ranking military experts. Pence, however, didn't outline what the Space Force would do that the Air Force, or NASA, doesn't do already, or how will we pay for it.

There'd be no pew-pew handheld laser guns shot at individuals inside gleaming white spacecraft, no fighter jets and death stars.

Despite the seemingly comical vagueness of this plan, a Space Force, should one actually be created, would address some real concerns.

Top of the list: protecting U.S. satellites. Recent reports suggest that Russia and China are developing space weapons designed to monitor and even take out U.S. military satellites. That could bring other American military operations to their knees — 800 U.S. satellites are in orbit, many of which provide the Pentagon with intelligence and communication networks and GPS — and they weren't exactly built to protect themselves in case of an attack. Spy satellites could collect valuable information from the enemy by scanning the ground, or interfere with signals from other satellites. In the most extreme cases, they could take down other satellites.

Without a stronger U.S. military presence in space, China and Russia will have ways to "interdict satellites both from a ground standpoint and from a space standpoint,” Director of the Defense Intelligence Agency Robert Ashley said at a Summit in Washington, according to Defense One. “The technology is being developed right now. It is coming in the near future.”

Ashley is right — the satellite fight is already heating up. In 2014, personnel at an undisclosed Air Force base rang the alarm bells when they discovered that Russian "Kamikaze" satellites (formally known as Kosmos 2499) were orbiting dauntingly close to U.S. deployed satellites. The sheer proximity made them worry that the Russian satellites could take out the American ones.

Then there was the time in January 2007 when Chinese ballistic missiles intentionally blew up one of the country's own outdated weather satellites into thousands of pieces of metal, as Wired reports. Strategic Command forces in Nebraska were shocked — being able to shoot a missile at a target moving faster than the Earth's orbit in outer space could lead to much more drastic action. Perhaps the government was testing out an anti-satellite rocket?

Now, proponents of Trump's Space Force use the threat of other nations attacking satellites to legitimize its creation. "We are not initiating this. We are saying we will be able to defend our satellites in space. At the same time, if someone is going to try to engage in space with military means, we will not stand idly by," U.S. Defense Secretary James Mattis told an audience during a trip to Brazil, as quoted by ABC News.

For the average person, though, there's not much to worry about. A satellite probably wouldn't fall on anyone's head — more likely, radars, positioning systems, and telecommunication networks would collapse. We'd have a hard time getting around, but except for some International Space Station astronauts afraid of getting shredded by ballistic satellite bits, we'd be pretty safe.

But before the Space Force can shoot down any satellites at all, we'll have to embark upon the long and tedious process of creating it. Shifting the responsibilities of thousands of military personnel, as Pence suggested, could take a very long time, and that's only going to happen once the funds are nailed down and approved. And there's no telling when that might be — Space Force could end up costing U.S. taxpayers an astronomical amount of money, which could make it a pretty tough sell for Congress.

The booming private spaceflight industry could help speed this up. Decades of government investment has allowed companies like SpaceX and Boeing to advance spaceflight technology so much that launching cargo into space has become a whole lot cheaper. So when the Space Force wants to, say, launch a satellite to combat the (very real, or, you know, not) threats to U.S. dominance in space, it'll cost it a whole lot less to do so.

Not everyone is on board with the Space Force, of course. By allocating funds to a Space Force, the Trump administration is showing Americans what it values — security, ensuring American global dominance — and what it doesn't — pressing human problems like restoring electricity to hurricane-ravaged Puerto Rico or bringing clean water to Flint, Michigan.

In truth, we have no idea what space wars of the future will look like. But establishing a Space Force is sure to bring about that future more quickly. By amplifying mistrust between nations — will the next person to touch down on the Moon try to claim territory? — the Trump administration is quashing the kind of exploration and innovation that enabled us to have a Space Force in the first place.

Read This Next
And He Scores
We Are Completely Puzzled by This Video of a Chinese Astronaut Playing Ping-Pong in Space
Moon Wrestling
The Head of NASA Is Scared Chinese Astronauts Will Seize Portions of the Moon
Monkey Business
China Plans to Send Monkeys to Space Station to Have Sex With Each Other
Sabers Rattled
Russia Issues Veiled Threat to Shoot Down Pesky SpaceX Satellites
Sad ROSS
Russia's New Space Station Gets Sadder the More We Hear About It
More on Off World
Light Me Up
Yesterday on the byte
Wall of Lasers Cuts Across Hawaii's Night Sky
Water Sign
Yesterday on the byte
Scientists Find New Evidence of Hidden Ocean World in Our Solar System
Trashing Orbit
Thursday on the byte
Elon Musk Says SpaceX May Build Starship That Dies on Purpose
READ MORE STORIES ABOUT / Off World
Keep up.
Subscribe to our daily newsletter to keep in touch with the subjects shaping our future.
+Social+Newsletter
TopicsAbout UsContact Us
Copyright ©, Camden Media Inc All Rights Reserved. See our User Agreement, Privacy Policy and Data Use Policy. The material on this site may not be reproduced, distributed, transmitted, cached or otherwise used, except with prior written permission of Futurism. Articles may contain affiliate links which enable us to share in the revenue of any purchases made.
Fonts by Typekit and Monotype.