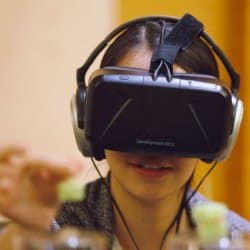 Flickr has revealed plans to begin immersing its users in photos that will make use of virtual reality headsets. Users were allowed to demo the company's test project while wearing the Oculus DK 2 headset and rotate themselves in a full 360 degrees to look at a whole photograph. They were able to switch to another image by looking at what was described as "a pair of blue and pink balls" for a few seconds, which is basically Flickr's logo.

This plan by Flickr to provide users with immersive photographs is the same as the mobile app that was reportedly planned by Facebook, wherein people will be able to rotate their mobile phones in order to look in panoramic view on 360-degree images. Bertrand Fan, Flickr's front-end architect, said that they plan to allow users who possess their own virtual reality equipment to engage in the images uploaded via their website.

Read This Next
To Meta Predator
Experts Warn of Child Predators in Mark Zuckerberg’s Metaverse
Defcon Fun
Princeton Researchers Create Terrifying VR Simulation of Nuke Attack to Train US Officials
AI Elder Gods
Neural Network Is Frighteningly Good at Drawing Cthulhu
Brands We Love
Ready or Not, Inexpensive VR Sex Is Going Mainstream
Brands We Love
Realistic, Interactive VR Sex Is Finally Here, and It's Affordable
More on Virtuality
Biggest Loser
Yesterday on the byte
Facebook's Metaverse Division Lost Nearly $14 Billion Dollars Last Year
Meta Marked
Jan 25 on the byte
The Metaverse Industry Is Already Going Belly-Up, for Reasons We Can't Imagine
Try Again
Jan 13 on the byte
Congress Rejects Funding the Military's Microsoft AR Goggles Because They Made Soldiers Sick
READ MORE STORIES ABOUT / Virtuality
Keep up.
Subscribe to our daily newsletter to keep in touch with the subjects shaping our future.
+Social+Newsletter
TopicsAbout UsContact Us
Copyright ©, Camden Media Inc All Rights Reserved. See our User Agreement, Privacy Policy and Data Use Policy. The material on this site may not be reproduced, distributed, transmitted, cached or otherwise used, except with prior written permission of Futurism. Articles may contain affiliate links which enable us to share in the revenue of any purchases made.
Fonts by Typekit and Monotype.