The Solution to Automation in the Workforce Could Be Retraining

This innovative concept could sweeten the deal for workers being replaced by AI.

Retraining is the New Recruiting

Employers are grappling with how to deal with the new wave of digital labor artificial intelligence (AI) will provide, which requires a huge number of technical roles like coders — what are now known as “new collar jobs.” The US Department of Labor states that there are hundreds of thousands of positions currently vacant. If AI is set to automate roles that only humans could fill previously, then individuals who can develop, streamline, or augment AI are in top demand.

However, there is a scarcity in supply, which is amplified by the fact that gifted coders may not be aware of the industry; ideal candidates are thin on the ground. This has caused companies to offer high salaries and attractive perks to promising candidates. To give a little perspective, jobs that require coding are now in the top income quartile.

Due to this shortage, and with apocalyptic predictions concerning the effect of the technology’s proliferation — with it possibly replacing 850,000 workers by 2030 — employers are turning to new models of integration. One of the key developments is a Silicon Valley model to retrain workers rather than to search for new talent. 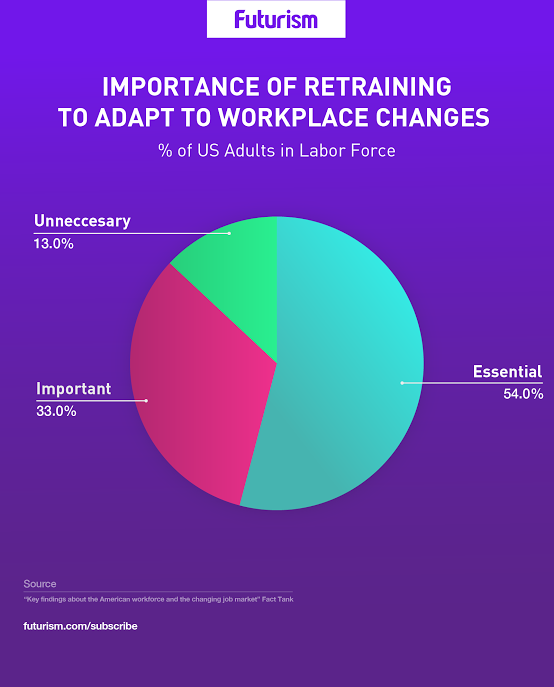 Rather than enter into bidding wars for talent, or risk important positions remaining unfilled, employers have found that retraining employees offers a comparatively quicker solution. It also comes with the benefit of not having to adapt a new employee to the intricacies and principles of a business. As Matt Norton, VP of Sales Engineering at Box, told techcrunch.com, “Enabling employees from the customer support team to retrain as engineers allowed us to fill open technical roles faster and also retain the institutional and product knowledge our best-performing employees had already developed.”

This comes with the benefit of having multifaceted employees who can adapt to changes in demands in different sectors of a company on a daily basis.

In short, retaining creates a mutually beneficial scenario in which the employee develops new skills (which 61 percent of Americans under thirty view as necessary), retains their job, and offers better customer service due to a wider knowledge. The employer gains a multifaceted employee capable of working in a number of areas, does not have to offer exorbitant salaries to attract talent, and does not have to deal with the problems of unfilled positions.

The mutual benefit within the company then leads to a better situation for customers which is amplified by the benefits AI can provide — these include greater efficiency, collecting data for analysis (which 44 percent of executives believe is artificial intelligence’s biggest benefit), and ingenious solutions based on deep learning.

Onereach found that “80% of executives believe artificial intelligence improves worker performance and creates jobs,” although the precise nature of how it will remains an enigma. AI will effect the entire spectrum of the job market, from retail to white collar positions. Retraining is one possible solution that applies to every industry, potentially generating benefits in the entire business world — it is a partial solution for the damage the introduction of AI to the workforce could cause.

Another solution that is being proposed is restructuring the education system to train people to fit these roles, rather than retraining them. Over the last five years, IBM has been testing a six year high school program that synthesizes traditional education with work experience and mentoring initiatives. Former President Obama called the idea “outstanding.”

AI is set to change the world radically, so it is important that ideas such as retraining and changing models of education are being developed in order to stop workers getting the raw end of an integration that will, ultimately, benefit customers, employees, and employers.