For two weeks, they will work and live inside the faux habitat, called M.A.R.S. 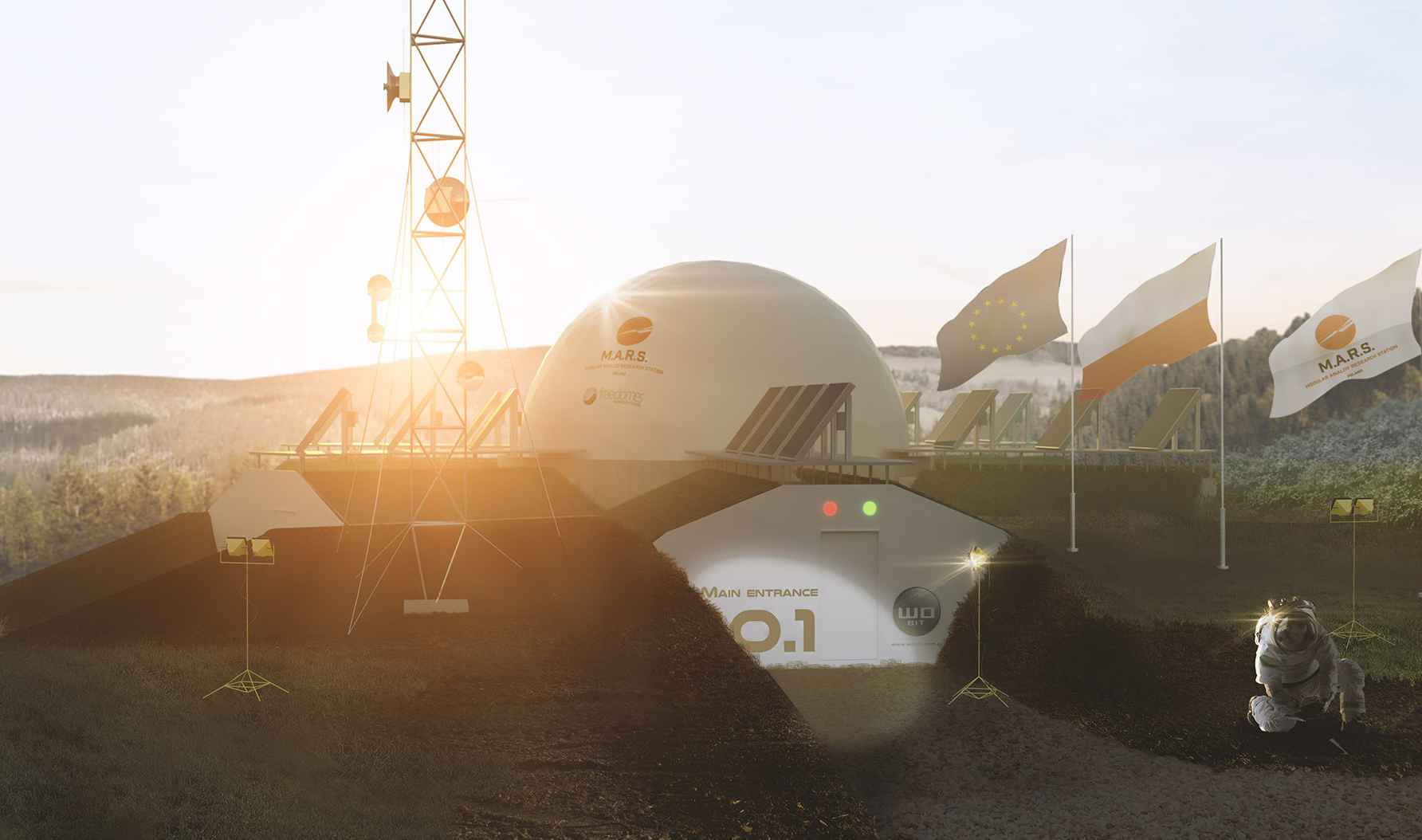 Image by Jan Popowski/Space Is More

Next to an old nuclear bomber hangar in western Poland, a mission to the surfaces of both the moon and Mars is about to begin.

The two-week mission is just a simulation, of course, since no entity on Earth is prepared to inhabit deep space. But the experiment — called the Poland Mars Analogue Simulation 2017 — will study a group of six volunteer "analogue" astronauts as they work through a realistic schedule of space exploration, then provide those findings to anyone who's drawing up crewed missions beyond Earth.

"This mission will be one of the most comprehensive Mars analogue missions ever conducted in Europe," Mina Takla, spokesperson for the PMAS 2017 mission, told Business Insider in an email.

The experiment, which Business Insider first learned about through the Dawn of Private Space Science Symposium on June 4, is being spearheaded by theSpace Exploration Project Group, or SEPG. (The group is part of the Space Generation Advisory Council and works with the United Nations on its space exploration research and support efforts.)

To make the mission possible, PMAS 2017 rounded up money from corporate sponsors, and also raised tens of thousands of dollars through crowdfunding sites. To create the habitat, the Space Garden Company — a partner to the project — secured material donations and also did some fundraising.

As Marta Bellon of Business Insider Poland reported in May 2016, a previous design for the base, created by British architect Scott Porter, called for four arms and a domed headquarters built by Freedomes (the same company that built the fictional Mars habitats for the blockbuster movie "The Martian").

However, organizers have since dropped the four-armed design for a U-shaped one. The habitat's planned location in southern Poland also moved to western Poland in the past year.

The new, U-shaped M.A.R.S. facility will have six units, each with its own dedicated purpose, such as "scientific research, crew quarters (including a gym), habitation, hygienic facilities, kitchen area, and storage and systems," Takla said. "The entry and exit to the habitat will be via an airlock."

Takla did not provide Business Insider with any sketches or photos of the facility in time for publication, nor could he confirm if and when its construction was completed.

Assuming M.A.R.S. is finished in time, six analogue astronauts will "land" in the habitat on July 31, then work and live and work inside it through August 13.

The volunteers hail from Puerto Rico, Israel, Spain, France, India, the US, Nigeria, and other locations. Meanwhile, a larger support team will operate as mission control in the northern Polish city of Torun, including psychologists to monitor the astronauts.

"[PMAS 2017] will be one of the most international, multicultural, and interdisciplinary analogue missions ever conducted, with members from over 28 different countries and representing scientific disciplines ranging from engineering to astrophysics, psychology, geology, and biology," Takla said.

In addition to following a strict schedule of experiments, maintenance, and personal time, mission managers will simulate other realities for a far-off planetary mission, including spacesuits to leave M.A.R.S., and annoying communications delays.

"[T]he first three days of the 14 days of the simulation will be in 'Lunar mode' with a real-time communication between habitat and Mission Control, before we go for the remaining 11 days into the Martian mode," Tajana Lučić, co-leader of SEPG, told Business Insider in an email.

When the Martian mode starts, Lučić said, "the time delay will be 15 minutes, and simulates the long distance between Earth and Mars and the related communication delay."

The PMAS 2017 mission isn't the only project trying to figure out how to run a tightly operated lunar or Martian base.

HI-SEAS in Hawaii, for example — which former Business Insider reporter Kelly Dickerson visited — has astronauts who live and work inside a habitat built on the side of a barren volcano.

Russia, China, and the ESA have also run six willing "astronauts" through a psychological gauntlet with its $15 million Mars500 experiment.

That project, which ended a few years ago, had the astronauts stay inside for 520 days, or nearly a year and a half, to see what challenges they faced — and how to prevent or solve them when real Mars colonization missions actually begin. (Boredom, concluded an exhaustive study of the project, is one of the greatest hurdles to overcome.)

Such information could prove extremely valuable to the first nation (or private company, like SpaceX) to land people on Mars. Whoever is spending tens of billions of dollars to get the job done, they'll not only want a crew to survive to tell the tale, but also make the best use of their time some 140 million miles from Earth.

Correction (July 10, 2017): Business Insider was initially given and directed to outdated information about M.A.R.S. We have since corrected and updated this story to reflect the project's current details.

Read This Next
Futurism
Here's How to Watch Elon Musk's Presentation at the International Astronautical Congress Live
Futurism
Astronauts Could Use TV, Video Games to Combat Isolation in Space
Futurism
After "Living on Mars" for Eight Months, Mission V Subjects Are Coming Home
Futurism
When Should We Send Humans to Mars?
Futurism
Elon Musk Has a New Timeline for Humans Living on Mars
More on Off World
Stunning Centaur
3:13 PM on the byte
James Webb Spots Asteroid With Its Own Saturn-Like Rings
Grrrrrrrr
Yesterday on the byte
Internet Erupts as NASA Spots Cartoon Bear on Surface of Mars
Gl1tc4
Yesterday on the byte
NASA Says Another James Webb Instrument Has Suffered a Glitch
READ MORE STORIES ABOUT / Off World
Keep up.
Subscribe to our daily newsletter to keep in touch with the subjects shaping our future.
+Social+Newsletter
TopicsAbout UsContact Us
Copyright ©, Camden Media Inc All Rights Reserved. See our User Agreement, Privacy Policy and Data Use Policy. The material on this site may not be reproduced, distributed, transmitted, cached or otherwise used, except with prior written permission of Futurism. Articles may contain affiliate links which enable us to share in the revenue of any purchases made.
Fonts by Typekit and Monotype.