Here's How Many Shipping Containers You Could Fit Inside SpaceX's Starship

Getting this much cargo into space at a time could be "truly revolutionary." 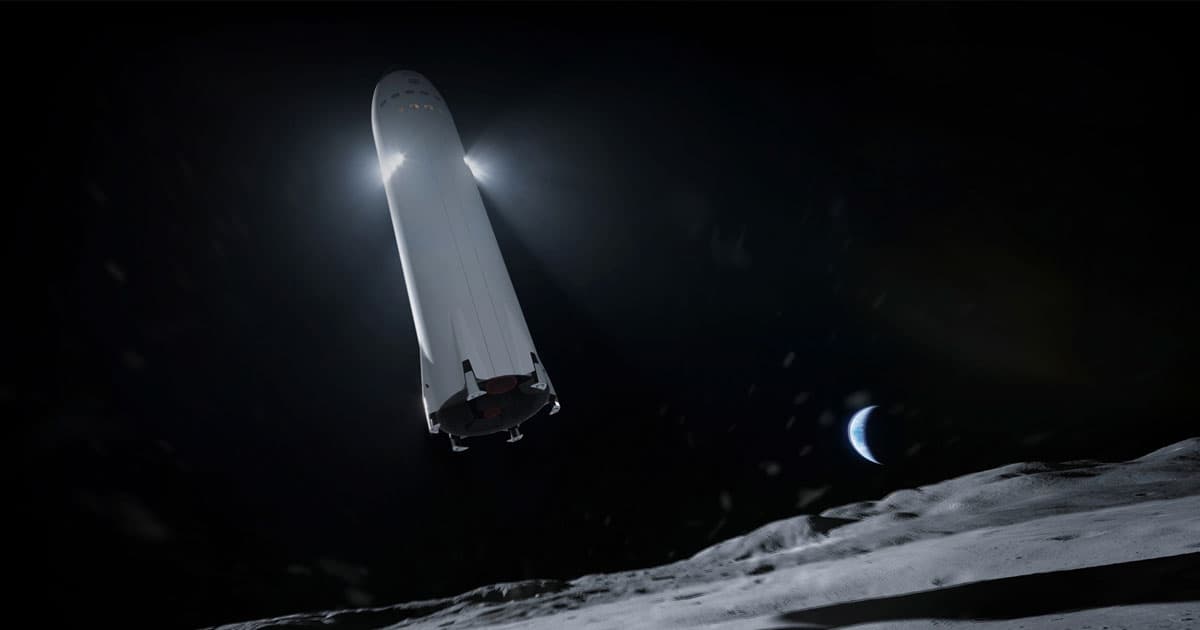 A new visualization by Twitter user Neopork shows just how much room there is inside Starship's cargo fairing. According to the graphic, you could fit two entire standard 40-foot shipping containers, and still be able to comfortably stand on top of them.

What up space nerds! This is what SpaceX Starship looks like with 2 standard 40 ft. shipping containers AND a 6' person in the cargo fairing for scale. HUGE. Retweet if you like it.@elonmusk @Erdayastronaut @DJSnM @NASASpaceflight @ChrisG_NSF @SciGuySpace @13ericralph31 @SpaceX pic.twitter.com/NAyET6v5d1

"There are no guarantees Starship will be successful, but the capacity to get this much cargo into space, on a reusable vehicle, is truly revolutionary," said Ars Technica's senior space editor Eric Berger in a comment highlighting the graphic.

If all goes according to plan — a substantial "if" — SpaceX says Starship will be capable of ferrying 100 passengers, or 100 tons of cargo, into orbit and on to the Moon or even Mars.

To accomplish such a feat, the spacecraft needs plenty of room. In late March, SpaceX released its Payload User's Guide to its massive spacecraft, noting how a Super Heavy rocket configuration of the Starship could carry 100 metric tons of cargo into low-Earth orbit (roughly 400 km up, where the space station is located) and 'only' 21 tons to geostationary orbit (at 36,000 km, where the majority of satellites orbit Earth) as it's a substantially longer trip.

The fairing could fit objects that are up to 72 feet in length and 26 feet wide.

The guide also points out that thanks to its massive cargo capacity, future Starships could be used to refuel spacecraft in orbit so they can go on to much longer journeys.

We still don't know when SpaceX will launch its first Starship mission. But as Ars Technica pointed out in March, Starship will likely fly cargo missions years before humans get a ride.

SpaceX is already building its eighth Starship prototype at its testing facilities in Boca Chica, Texas. The tank alone is absolutely ginormous, as recent photos illustrate.

With booster, the rocket will tower at about just shy of 400 feet, almost 100 feet taller than the Statue of Liberty.

Editor's note 6/30/22: An earlier version of this story misstated the orbiting height of the International Space Station. It has been updated.

More on Starship: Damn, This Photo Shows How Huge SpaceX’s Starship Really Is

Read This Next
Futurism
Free Speech Champion Elon Musk Fires Employees for Criticizing Him
Uh Oh
Something Very Bad Might Be About to Go Down at NASA
NDA
SpaceX Reportedly Paid $250,000 to Silence Sexual Allegations Against Elon Musk
Captain Planet
Buying Twitter Seems Like a Huge Distraction for Elon Musk's Mars Plans
Billionaire Bailout
Bernie Sanders Working to Block Jeff Bezos From NASA Moon Contract
More on Off World
Going Down
Jun 25 on the byte
Scientists Say the Sun Is Acting Up and Causing Satellites to Fall Back to Earth
Target Practice
Jun 24 on the byte
NASA Spots Location Where Derelict Rocket Smashed Into the Moon
Fly Already
Jun 24 on the byte
SpaceX Finally Lifts Super Heavy Booster Using Giant Robot Arms
READ MORE STORIES ABOUT / Off World
Keep up.
Subscribe to our daily newsletter to keep in touch with the subjects shaping our future.
+Social+Newsletter
TopicsAbout UsContact Us
Copyright ©, Camden Media Inc All Rights Reserved. See our User Agreement, Privacy Policy and Data Use Policy. The material on this site may not be reproduced, distributed, transmitted, cached or otherwise used, except with prior written permission of Futurism. Fonts by Typekit and Monotype.