Shanghai Is Getting a Massive Futuristic District With Towering Vertical Farms

Proof that the cities of tomorrow will look nothing like the world today. 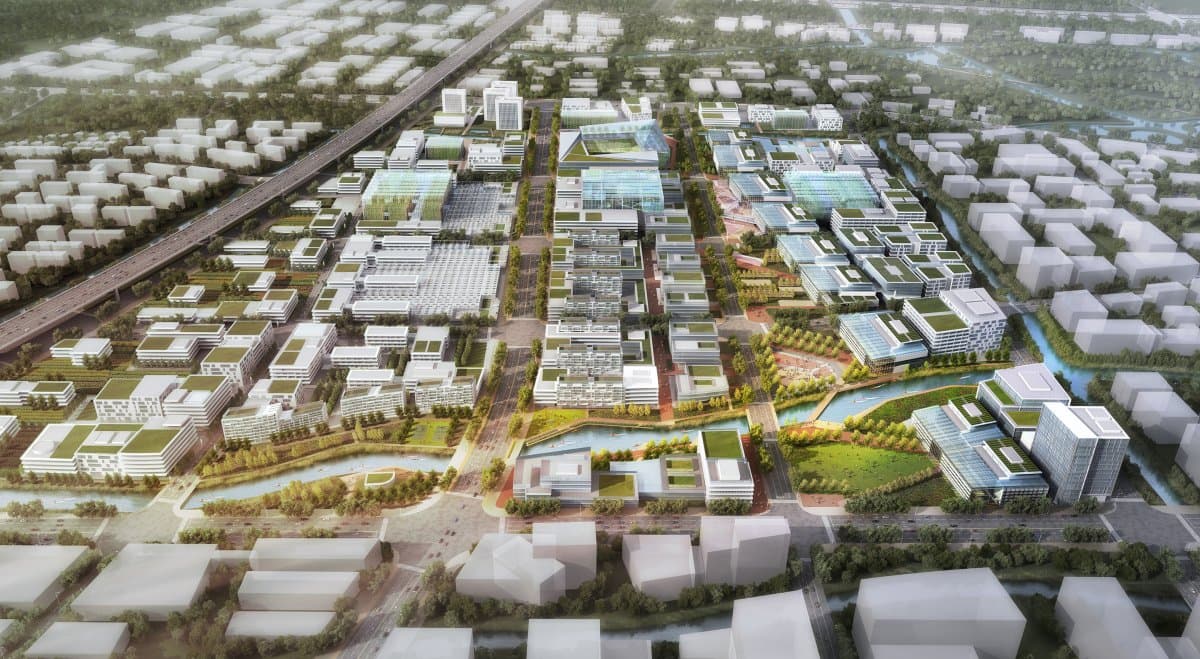 Shanghai may be known for its towering skyscrapers, but a large part of the city will soon have towering vertical farms that grow fruit and vegetables.

The city is planning a 250-acre agricultural district, which will function as a space to work, live, shop, and farm food. Called Sunqiao Shanghai, it will include new public plazas, parks, housing, stores, restaurants, greenhouses, and a science museum. Some of the crops will be grown hydroponically indoors (i.e. under LEDs and in nutrient-rich water rather than soil).

The masterplan was conceived by the design firm Sasaki, which has offices in Massachusetts and Shanghai. It's part of a larger plan to turn a portion of the city into an ag-tech hub, Michael Grove, a principal at Sasaki, tells Business Insider. In the mid-1990s, Shanghai's government designated a 3.6-square-mile area of the city for agricultural production, hoping that bioengineering and biopharmaceutical companies would set up research facilities working in tandem with city greenhouses.

Shanghai only constructed 3 single-story greenhouses at the time. Sasaki was commissioned to expand the plan for Sunqiao, Grove says. There isn't a construction timeline yet, but Grove estimates that a crew will break ground on the project by 2018.

A new farming district, called Sunqiao, will be located between Shanghai's international airport and the city center.

With over 24 million residents, Shanghai is one of the densest cities in the world.

... as well as housing, stores, restaurants, and a science museum.

The masterplan features a vast amount of public outdoor space.

The farms will primarily grow leafy greens, like kale, bok choi, and spinach. Those will be sold to restaurants, grocers, or exported. In the future, Grove says the district may also raise fish in vertical aquaponic farms.

The district will be developed and maintained by Shanghai Sunqiao Modern Agriculture United Development Co. Ltd., which is working with local planning officials.

He says that the project's largest challenge will be building architecture that accommodates farmland. For example, his team needs to make sure the towers don't cast shadows on crops that need lots of sunlight.

Sunqiao will allow for produce to be grown closer to the city, while reducing the impact of land and water use that comes with traditional agriculture, Grove says. At the same time, he acknowledges the large energy use that comes with vertical farms, which rely on LEDs to grow crops.

"As cities continue to expand, we must continue to challenge the dichotomy between what is urban and what is rural," Grove says.