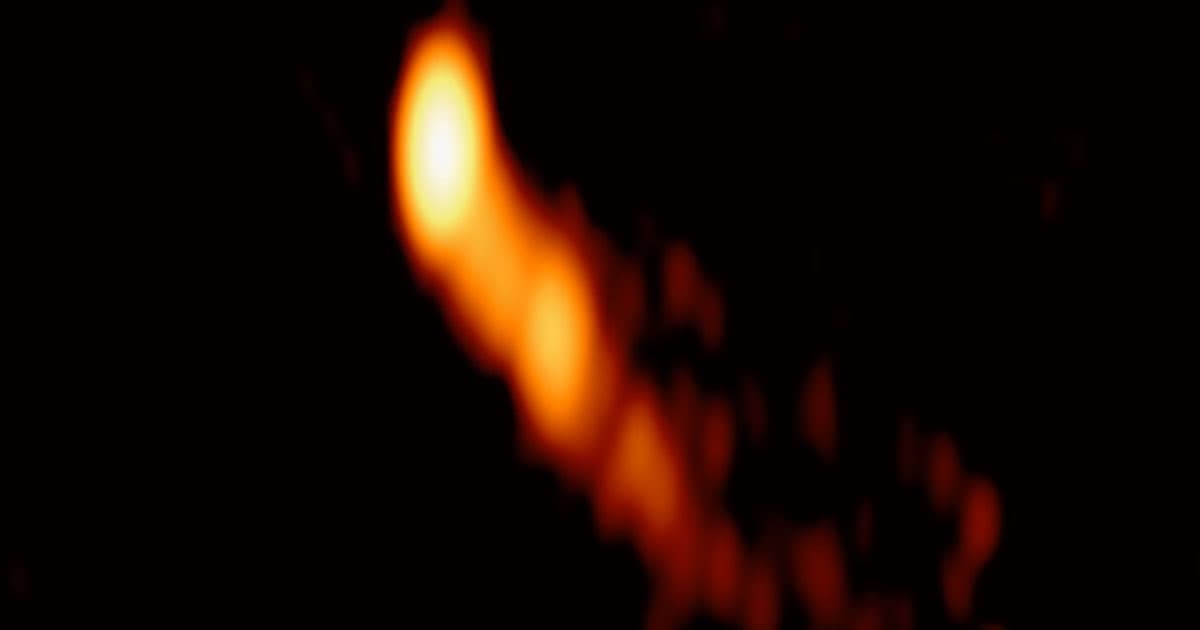 The video shows a distant quasar called 3C 279, in the Virgo constellation five billion light-years away from Earth, blasting out "twin fire-hose-like jets of plasma," according to a statement. A quasar is the extremely bright heart of a galaxy inside of which a supermassive black hole is surrounded by an "accretion disk," an area of diffuse material spinning around a central body.

To capture the series of images, the team used a new technique called "very long baseline interferometry," which collects and synchronizes data from a number of radio dishes from around the world, forming "one huge virtual Earth-size telescope."

EHT then analyzed and combined this data to focus in on distant objects at an astonishing resolution: "20 micro-arcseconds on the sky — the equivalent of someone on Earth identifying an orange on the Moon," according to the statement.

"We knew that every time you open a new window to the Universe you can find something new," Jae-Young Kim, researcher at the Max Planck Institute for Radio Astronomy (MPIfR) in Germany and lead author of the paper, said in the statement.

"Here, where we expected to find the region where the jet forms by going to the sharpest image possible, we find a kind of perpendicular structure. This is like finding a very different shape by opening the smallest Matryoshka doll," Kim added.

It's a massive achievement for the EHT team.

"Last year we could present the first image of the shadow of a black hole," said chair of the EHT Collaboration Board Anton Zensus. "Now we see unexpected changes in the shape of the jet in 3C 279, and we are not done yet. As we told last year: this is just the beginning."

Read This Next
Star War
Scientists Are Trying to Figure Out How to Kill Stars with Black Holes
EHT Tu, Black Hole
Astronomers Release Stunning New Image of Black Hole
Kill It With Fire
Astronomers Find Five Dozen Baby Black Holes in Distant Psychotic Chaos Galaxy
Pac Man Black Hole
A Black Hole Bites a Chunk Out of This Star Every 114 Days
Hol Up
A Supermassive Black Hole Is Missing, NASA Says
More on Hard Science
Warped Tour
Feb 2 on futurism
Professor Believes Door to Warp Drive May Lie With Ethylene Glycol
Sky Bursts
Feb 2 on the byte
Astronomers Intrigued by 25 Mysterious Repeating Radio Signals From Deep Space
Tractor Beam
Jan 26 on the byte
Scientists Build Working Tractor Beam, Although It's Comically Tiny
READ MORE STORIES ABOUT / Hard Science
Keep up.
Subscribe to our daily newsletter to keep in touch with the subjects shaping our future.
+Social+Newsletter
TopicsAbout UsContact Us
Copyright ©, Camden Media Inc All Rights Reserved. See our User Agreement, Privacy Policy and Data Use Policy. The material on this site may not be reproduced, distributed, transmitted, cached or otherwise used, except with prior written permission of Futurism. Articles may contain affiliate links which enable us to share in the revenue of any purchases made.
Fonts by Typekit and Monotype.