Even pigs can be gamers. 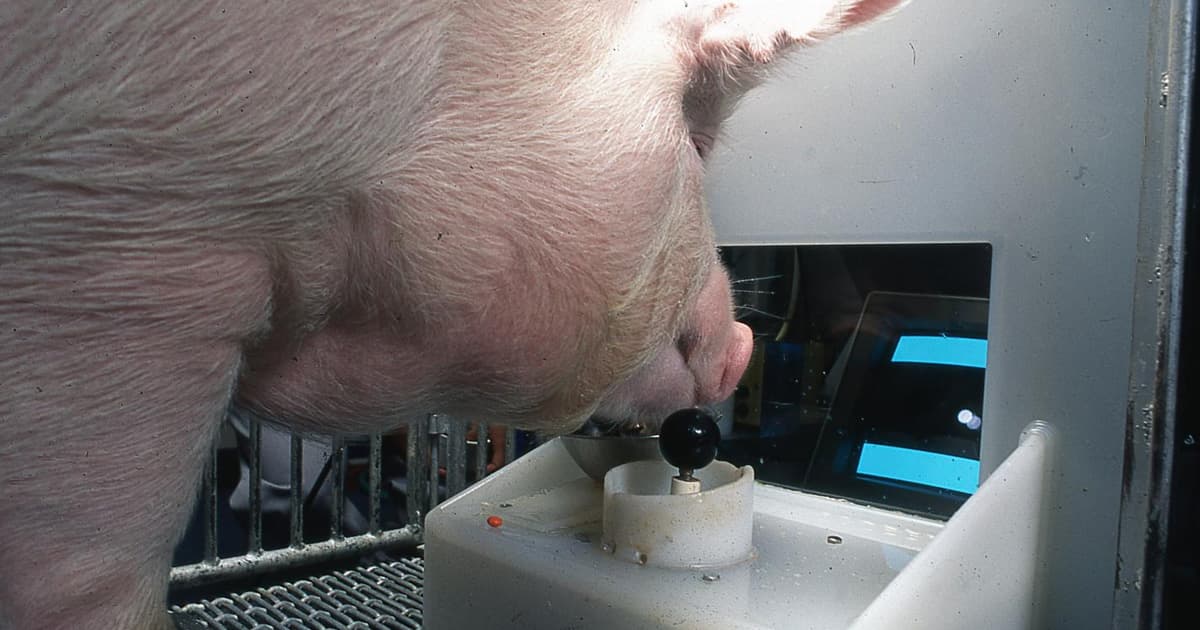 A team of researchers at Purdue University have successfully taught four pigs how to use a joystick — novel research that demonstrates a "remarkable" level of behavioral and mental flexibility, according to the team.

As detailed in a new study published in the journal Frontiers in Psychology, the four pigs were able to play a simple joystick-controlled video game, demonstrating basic understanding despite their limited dexterity.

The experiment involved the four pigs — named Hamlet, Omelette, Ebony, and Ivory — moving a cursors on a screen by manipulating a joystick with their snout. The goal was to move the cursor to four target walls displayed on the screen.

"It is no small feat for an animal to grasp the concept that the behavior they are performing is having an effect elsewhere," lead author Candace Croney, a professor at Purdue University, said in a statement. "That pigs can do this to any degree should give us pause as to what else they are capable of learning and how such learning may impact them."

Scientists already knew that pigs were clever enough to learn basic commands, like dogs, including "come" and "sit." According to the team, it's "remarkable" the pigs were able to move the cursor on the screen despite they are far-sighted and don't have opposable thumbs.

Adorably, the pigs were even motivated through verbal encouragement from the scientists.

"This sort of study is important because, as with any sentient beings, how we interact with pigs and what we do to them impacts and matters to them," Croney said.

"We therefore have an ethical obligation to understand how pigs acquire information, and what they are capable of learning and remembering, because it ultimately has implications for how they perceive their interactions with us and their environments," she added.

The study was not able to also ascertain whether the interface could allow us to communicate with the pigs more directly, as scientists have done with primates in the past.

Hamlet and Omelette also grew "too large to stand long enough to complete sessions," according to the paper.

READ MORE: Pigs can be trained to use computer joysticks, say researchers [The Guardian]

Read This Next
zombie star
Scientists Puzzled by Star That Exploded in Supernova But Somehow Survived
Whack-an-Alien
Chinese Scientists Say They May Have Detected Signal From Extraterrestrial Intelligence, But Probably Not
That's One Theory
Weird Signal Appears to Have Come From Habitable Star System
Walled Up
Scientists Say Space Is Filled With Invisible Walls
Black Hole Snapshot
Scientists Release Image of Black Hole at Center of Our Galaxy
More on Hard Science
Moved to Tears
Jun 30 on the byte
Scientists Say New James Webb Images Are So Powerful That It Was Emotional Just Looking at Them
Good God
Jun 28 on the byte
Huge Cloud of Toxic Yellow Gas Kills 13
Life on Mars
Jun 21 on the byte
Physicist Says There's a Small Chance You'll Wake Up on Mars Tomorrow Due to Quantum Physics
READ MORE STORIES ABOUT / Hard Science
Keep up.
Subscribe to our daily newsletter to keep in touch with the subjects shaping our future.
+Social+Newsletter
TopicsAbout UsContact Us
Copyright ©, Camden Media Inc All Rights Reserved. See our User Agreement, Privacy Policy and Data Use Policy. The material on this site may not be reproduced, distributed, transmitted, cached or otherwise used, except with prior written permission of Futurism. Fonts by Typekit and Monotype.