Scientists Are On the Edge of a Fusion Power Breakthrough

"This is the most significant advance in inertial fusion since its beginning in 1972." 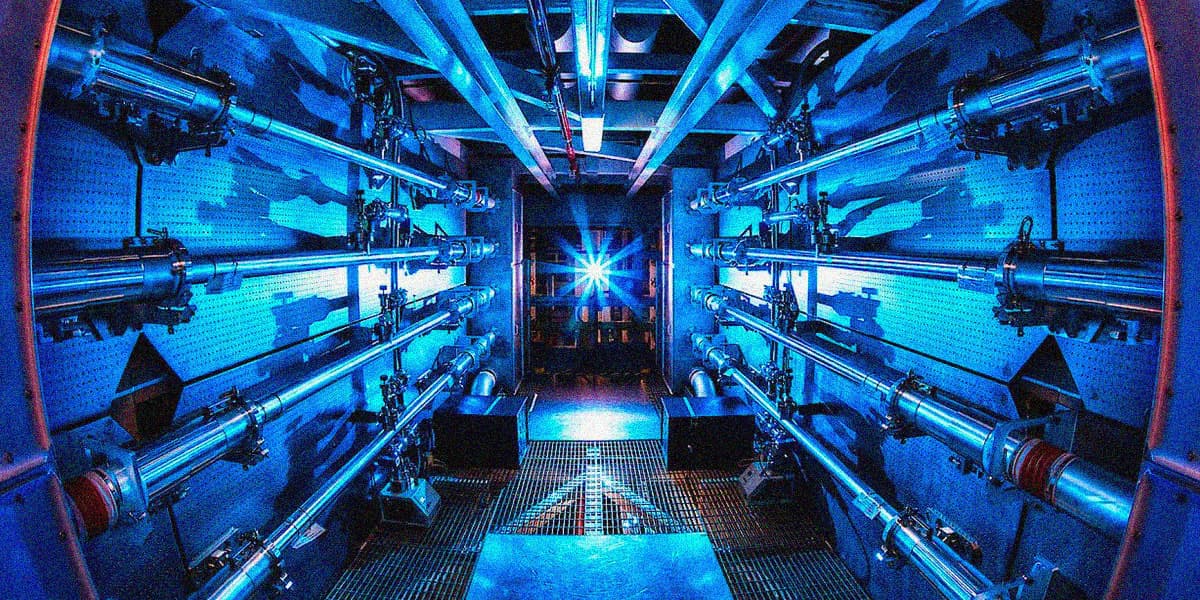 Fusion energy — to many, the holy grail of sustainable energy — is on the edge of its next breakthrough.

Using a powerful laser at the National Ignition Facility (NIF) in California, researchers managed to heat up a peppercorn-sized sample of two hydrogen isotopes well past the temperature of the Sun's core, a process known as inertial confinement fusion (ICF).

ICF is one of two major branches of fusion energy research, with the other being "magnetic confinement fusion," a field that has seen its own recent breakthroughs.

During the experiment carried out at the NIF earlier this month, scientists managed to harvest 70 percent of the energy — about 1.35 kilojoules worth — used by the powerful laser to start the fusion reaction inside the reactor, the BBC reports.

While that may not sound like much, it's a big leap in the field. "This is a huge advance for fusion and for the entire fusion community," Debbie Callahan, a physicist at the Lawrence Livermore National Laboratory where the NIF is located, told the BBC.

In other words, we are slowly approaching the point where are truly "achieving nuclear fusion," or generating a net-positive amount of energy — the industry's holy grail that has yet to be reached despite almost a century of research.

The promise is as lucrative as it has ever been: an infinite supply of carbon neutral energy without ever running the risk of a nuclear meltdown.

Scientists at the NIF are particularly excited about their recent experiment as the fusion reaction is starting to be hot enough to lead to more fusion reactions, a process known as ignition.

"Self-sustaining burn is essential to getting high yield," Callahan explained to the broadcaster. "The burn wave has to propagate into the high density fuel in order to get a lot of fusion energy out."

It was a big moment for the team. "Demonstration of ignition has been a major scientific grand challenge since the idea was first published almost 50 years ago," said Jeremy Chittenden, co-director of the Centre for Inertial Fusion Studies at Imperial College London which is helping analyze the data, in a statement. "It was the principal reason for the construction of NIF and has been its primary objective for over a decade."

"The NIF team have done an extraordinary job," Steven Rose, director of the Center for Inertial Fusion Studies at Imperial, added. "This is the most significant advance in inertial fusion since its beginning in 1972."

The research could also have wider reaching implications for the world of physics. "The NIF lasers already created the most extreme conditions on Earth, but the new experiment appears to have doubled the previous temperature achieved," said Brian Appelbe, Research Associate in the Centre for Inertial Fusion Studies at Imperial, in the statement. "We have entered a regime we’ve previously never been in – this is uncharted territory in our understanding of plasma."

That said, it's too early to pop the champagne corks. The team is still going through the data with a fine-tooth comb to ensure "that we understand the result," according to Callahan.

The scale of the NIF experiment also leaves something to be desired, despite the high praise. It only yielded about the "equivalent to the energy required to boil a kettle," as Chittenden told the BBC.

Its scale may be a long, long way off. But any kind of breakthrough in this field, one that's long vexed some of the world's greatest working scientists, where the stakes could not be higher, is nothing if not slightly astounding on its own.

More on fusion energy: Jeff Bezos Is Helping Build a Fusion Power Plant in the UK

Read This Next
Net Gain
Physicists Say New Breakthrough Proves Fusion Power Is Possible
Another Breakthrough
Fusion Scientists Claim Net Energy Gain, in Potentially Huge Breakthrough
Fusion Futility
Elon Musk Slams Fusion, Says Future of Energy Is Wind and Solar
Hurricane Season
Oops! Fusion Facility Keeps Failing to Recreate Last Year's "Breakthrough" Record
Smashing Atoms
Startup Says It's Honing in on Simple Solution for Practical Fusion Power
More on Earth & Energy
From Bad to Worse
Yesterday on the byte
Global Warming Is Worse Than We Thought, AI Tells Scientists
RIP Fred
Yesterday on the byte
Instead of Predicting Length of Winter, Groundhog Simply Dies
Fly Guy
Wednesday on the byte
Bird Advocates Horrified by Pigeon Dyed Pink For Gender Reveal Party
READ MORE STORIES ABOUT / Earth & Energy
Keep up.
Subscribe to our daily newsletter to keep in touch with the subjects shaping our future.
+Social+Newsletter
TopicsAbout UsContact Us
Copyright ©, Camden Media Inc All Rights Reserved. See our User Agreement, Privacy Policy and Data Use Policy. The material on this site may not be reproduced, distributed, transmitted, cached or otherwise used, except with prior written permission of Futurism. Articles may contain affiliate links which enable us to share in the revenue of any purchases made.
Fonts by Typekit and Monotype.