"When the Arctic warms, the world warms." 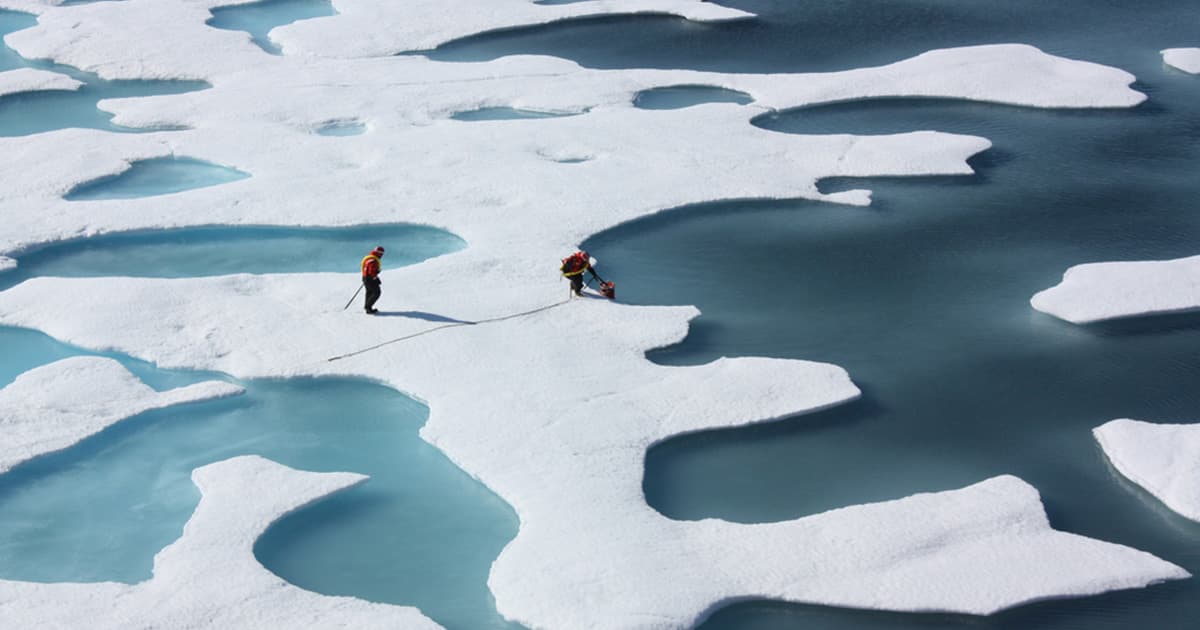 Experts are warning that the sea ice covering much of the Arctic appears to be thinning twice as previously thought, The Guardian reports.

In a new study published in the journal The Cryosphere today, a team of researchers have extrapolated how temperature, snowfall and ice floe movement can affect the accumulation of snow. Previously, we've had to rely on data collected by Soviet expeditions on frozen masses of sea ice between 1965 and 1991.

The new computer model, which estimated snow cover from 2002 to 2018, showed that sea ice thickness is thinning twice as fast as compared to previous estimates — a worrying sign that the effects of climate change could be accelerating at an alarming rate.

Snow is an important factor to judge the health of ice shelves in the Arctic, but it's tricky to track because it's invisible to satellite radar.

"Sea ice thickness is a sensitive indicator of the health of the Arctic — and, when the Arctic warms, the world warms," lead author Robbie Mallett from the University College London told The Guardian.

"Sea ice has begun forming later and later in the year, so the snow on top has less time to accumulate," Mallett said. "Our calculations account for this declining snow depth for the first time."

Thinning ice could be compounding a number of concurrent issues.

"Thicker ice acts as an insulating blanket, stopping the ocean from warming up the atmosphere in winter and protecting the ocean from the sunshine in summer," Mallett added. "Thinner ice is also less likely to survive during the Arctic summer melt."

Researchers believe rapid changes in the Arctic could also be contributing to extreme weather events, including droughts and floods in the northern hemisphere.

With large masses of ice melting, shipping routes are becoming shorter and shorter. In February, a cargo ship made a round trip around Siberia between China and Europe for the first time in winter, according to The Guardian.

That also means a higher risk of oil spills in the Arctic, according to Mallett.

Scientists, however, are optimistic that the new tracking models could allow them to better forecast the long term effects climate change is having on the Arctic — and perhaps ways to slow down the disappearance of sea ice.

Read This Next
Unreliable Friends
Archipelagic Nation Sick of Other Countries Breaking Climate Change Promises
The Kids Won't Be Alright
Elon Musk Warns That Humankind Will "End Up in Adult Diapers"
Circle of Life
Hooray! The Great Pacific Garbage Patch Has Become a Thriving Ecosystem, Scientists Say
Life on Earth
Astrobiologists Suggest the Earth Itself May Be an Intelligent Entity
Wake-up Call
The American West's "Megadrought" Is The Worst It's Been in 1,200 Years
More on Earth & Energy
Fashion Week
Yesterday on the byte
Scientists Discover Horrifying Crab That's Covered in "Hair"
Fire Bird
Friday on the byte
Experts Say Birds Are Catching on Fire on Power Lines and Starting Wildfires
Three Cheers
Friday on the byte
Happy BBQ Season! There's Beer Made From Toilet Water Now
READ MORE STORIES ABOUT / Earth & Energy
Keep up.
Subscribe to our daily newsletter to keep in touch with the subjects shaping our future.
+Social+Newsletter
TopicsAbout UsContact Us
Copyright ©, Camden Media Inc All Rights Reserved. See our User Agreement, Privacy Policy and Data Use Policy. The material on this site may not be reproduced, distributed, transmitted, cached or otherwise used, except with prior written permission of Futurism. Fonts by Typekit and Monotype.