Science Explained: Why Do Boomerangs Come Back? 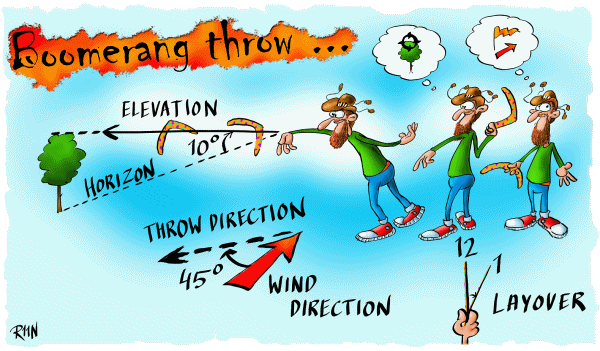 You may have had one as a child. You may have tried to make one as an adult (if not, you absolutely should). They are one of the most interesting toys around: Boomerangs. With their basic V shape, they seem rather simplistic; however, as anyone who has ever thrown one will tell you, they are actually rather complex, and making one come back to you isn't always easy.

To begin with, boomerangs are much more than just toys. The are weapons. These devices were used by our ancient ancestors for hunting purposes. Though, of course, if you hit another organism with it, the boomerang won't return to you. Nevertheless, these devices were used because they had the unique ability to soar through the air for rather long distances, and in fact, they stand as one of our earliest flying devices.

Ultimately, the date to somewhere around 23,000 BCE.

In the 1980s, scientists uncovered pieces of a mammoth's tusk that is estimated to be at least 23,000-years-old. These tusks had been shaped by some an ancient individual into an aerodynamic shape that had a stark resemblance to the boomerang that we know today. That said, it is unclear whether or not this is truly a boomerang, though several archaeologists think so.

In addition to this, we know that King Tutankhamen, one of the most famous pharaohs of ancient Egypt, had an extensive collection. He lived some 3,300 years ago (about 1330 BCE). Other specimens have come from all across the globe—Australia, Africa, North America—and they all date to many, many thousands of years ago.

But how do they work?

Watch: How to Throw a Boomerang

There are two keys to the boomerang: The shape of the wings and the angle at which the device is thrown. The boomerang is designed is such a way that, as it travels through the air, the wings generate both spin and lift.

This movement is created because of the characteristic V shape and their rounded (also known as "beveled") edges. When it travels along, these features create something that is known as "gyroscopic precession."

In short, as it flies through the air, one wing travels faster than the other. The unbalanced force that results from this difference is what causes the boomerang to turn and, if it is thrown just right (wind direction and speed must be accounted for), it will come back to the thrower.

To get a little more technical. Gyroscopic precession is what happens in rotating bodies when an applied force is manifested 90 degrees later in the direction of rotation from where the force was applied. If that is a little too technical, then let's just have Vertasium help explain.

Watch: What is Gyroscopic Precession?

As a final point, we do know for certain that boomerangs have been in use for hunting and warfare for at least the last 10,000 years. Which is still a pretty long history.