Samsung Milk: Watch a Library of Virtual Reality Videos Without a Headset

The Milk VR app lets you try virtual reality without a headset.

The Dawn of virtual reality (VR) is upon us; however, for most people, it isn’t terribly accessible. At least, not just yet. But for anyone who wants to jump onto the bandwagon, Samsung has something special (if you happen to have a specific model of a Samsung phone).

They just released their Milk VR app on the Google Play Store. The app simulates the experience of VR on your Android mobile device without the need for a VR headset like the Samsung Gear VR. You can grab Milk VR on the Play Store for free….but only if you happen to have one of the (very, very few) devices that are supported. I have a Samsung Galaxy Note 4, and couldn’t download it. 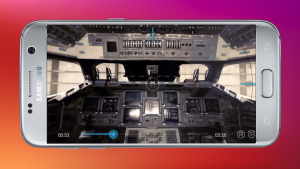 Users will be able to experience over 700 titles of VR content, such as 360-degree videos created by media partners like the NBA, Mountain Dew, and Skybound Entertainment. By moving your phone, you’ll be able to pan and tilt to look around at the virtual world.

Although not exactly an alternative to full-fledged VR systems like the Oculus Rift, the HTC Vive, or even the Samsung Gear VR, it makes it possible for most people to get a sense of what it’s like.

This New $5,800 Headset is the Rolls Royce of Virtual Reality