Russian Rocket Part Careening Back Down to Earth After Failed Launch

Nobody knows where it will make impact. 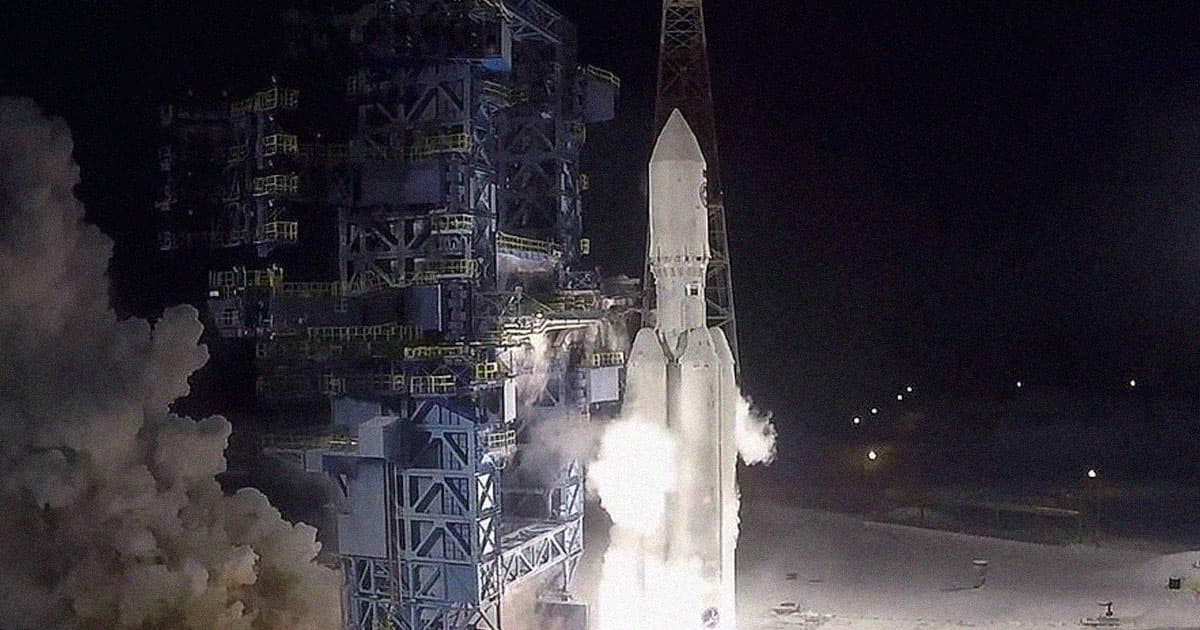 A Russian rocket booster is making its uncontrolled re-entry through the atmosphere right now — and officials aren't entirely sure where its remains will make impact.

According to state-run news agency TASS, the full-size payload mockup that was meant to test a new rocket stage successfully separated from an Angara-A5 carrier rocket after launching late last month.

But the booster's engines failed, preventing it from adjusting its path beyond low-Earth orbit.

The launch was the third test flight of Russia's Angara-A5, a heavy-lift rocket that uses more environmentally friendly fuels.

Russia's space agency Roscosmos has yet to acknowledge the uncontrolled re-entry. The agency's director general Dmitry Rogozin, however, claimed in a characteristically cryptic tweet that everything is "operating normally" and that "armed security for key facilities of the [Baikonur] cosmodrome has been strengthened."

It's unclear, though, whether Rogozin's tweet is in reference to Persei's re-entry.

Persei is likely still plummeting through the atmosphere at press time, and is set to make impact some time later this afternoon, according to Smithsonian astronomer and expert space tracker Jonathan McDowell.

If all goes well, the booster will land in the Pacific Ocean.

"To be clear, I do NOT regard this object as a significant risk," McDowell tweeted. "Reentries for a object with dry mass of about four tons may see some debris reach the ground, but not much."

It's far from the first time rocket parts have plummeted back down to Earth uncontrollably.

After China allowed a massive Long March 5B rocket to make a similar re-entry last year, NASA administrator Bill Nelson called the country out for "failing to meet responsible standards regarding their space debris."

Especially with the advent of reusable rocket stages such as SpaceX's Falcon 9 booster, countries are increasingly facing pressure to stop the practice — or at least to ensure that boosters are making a predictable reentry instead of allowing them to fall unpredictably.

Read This Next
Sabers Rattled
Russia Issues Veiled Threat to Shoot Down Pesky SpaceX Satellites
Sad ROSS
Russia's New Space Station Gets Sadder the More We Hear About It
Buh Bye
Russia Says It's Definitely Quitting the ISS But Doesn't Say When Exactly
Don't Let the Door Hit You
Russian Space Chief Leaving Post, May Be Headed to War Zone
Gone Girl
Rumors Swirl That the Deranged Head of the Russian Space Program Is Getting Fired
More on Off World
Grrrrrrrr
Yesterday on the byte
Internet Erupts as NASA Spots Cartoon Bear on Surface of Mars
Gl1tc4
Yesterday on the byte
NASA Says Another James Webb Instrument Has Suffered a Glitch
comet Spotting
Yesterday on the byte
Behold! Dazzling Green Comet Approaches
READ MORE STORIES ABOUT / Off World
Keep up.
Subscribe to our daily newsletter to keep in touch with the subjects shaping our future.
+Social+Newsletter
TopicsAbout UsContact Us
Copyright ©, Camden Media Inc All Rights Reserved. See our User Agreement, Privacy Policy and Data Use Policy. The material on this site may not be reproduced, distributed, transmitted, cached or otherwise used, except with prior written permission of Futurism. Articles may contain affiliate links which enable us to share in the revenue of any purchases made.
Fonts by Typekit and Monotype.