Russia Is Floating a Nuclear Power Plant Across the Arctic

Opponents call it a "Chernobyl on ice" and "nuclear Titanic." 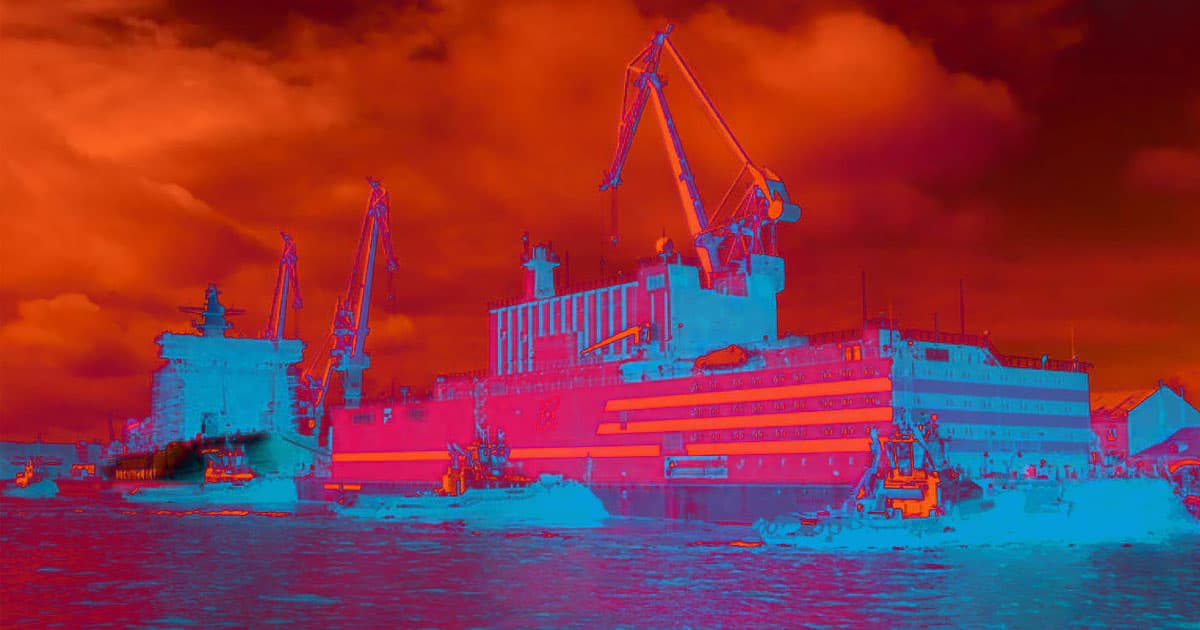 Russia's massive floating nuclear power plant is destined to make its way across the Arctic Ocean to supply electricity to a remote eastern region, The Guardian reports. The plant, called the Akademik Lomonosov, will travel about 4,000 miles from St. Petersburg to provide power for Pevek, a remote North Eastern Arctic port town.

The 70-megawatt plant is capable of generating enough electricity for around 100,000 homes, according to the newspaper. Pevek, however, has only a population of around 5,000, while the surrounding Chukotka Region has 50,000 inhabitants.

Russia launched the plant out of the St. Petersburg shipyard in April 2018 — towed however, since it doesn't have a propulsion system of its own. It also reportedly features a pool, gym, and a dry bar on board.

But the potential for a natural disaster is substantial, according to some environmentalists.

"It's riskier than running an ordinary nuclear-power station, and Russia has a checkered past when it comes to ordinary power stations," Jan Haverkamp, a Greenpeace nuclear-energy expert, told Business Insider.

In a recent Greenpeace blog post, Haverkamp likened the power station to "a Chernobyl on ice." In 2018, she called it a "nuclear Titanic."

Anna Kireeva, head of communications at the Bellona Foundation, an organization that advocates for environmental issues in the Arctic, also rang alarm bells.

“I’m really concerned that such nuclear technologies can be used in countries where levels of nuclear radiation safety, regulation and standards of safety are not on such a high level as in Russia," she told The Guardian. "What will they do with spent nuclear fuel? How will they react in case of emergencies?"

But authorities at Rosatom, Russia's State Nuclear Energy Corporation, say they're confident the massive barge is safe. They argue that the Akademik Lomonosov is "virtually unsinkable" and can withstand collisions with icebergs and seven-meter waves, as The Guardian reports.

“We studied the experience of Fukushima closely, Dmitry Alekseyenko, head of construction and operation of the power plant told The Guardian. "[What happens] if the platform is hit by a tsunami? Or thrown onshore? According to our tests, a tsunami caused by a nine-point [earthquake] will not dislocate it from its base.”

Rosatom has also hit back at Greenpeace.

"Their allegations about the dangers posed by the plant are completely baseless," reads a 2018 statement. "Greenpeace has not presented any meaningful scientific evidence to support any unaddressed risks or shortcomings of the plant’s design, which is based on tried and tested technology and has an impeccable track record."

Regardless, it might be too late to stop a future where floating nuclear power stations power distant population centers.

In fact, Russia is not the only nation interested in constructing floating nuclear power plants. China's National Nuclear Corp announced in March it's planning to build up to 20 floating nuclear plants to bring power to artificial islands in the South China Sea.

More on the power station: To Power Villages And Oil Rigs, Russia Sent A Nuclear Reactor On A “Tsunami-Proof” Barge

Read This Next
Fusion Force
China Announces Plan for Hybrid Fission-Fusion Power Facility
Dialed Up
Spain Forcing Public Places to Set AC at or Above 81 Degrees Fahrenheit
Good Neighbors
German Government Says It May Keep Nuclear Plant Open After All
Weird Times
White House Brags That America Is Producing More Oil and Gas Than Ever
Great Balls of Fire
"Radioactive Gobstoppers" Could Stop the Next Nuclear Reactor Meltdown
More on Earth & Energy
Rock Battery
Yesterday on the byte
Researchers Successfully Turn Abandoned Oil Well Into Giant Geothermal Battery
Do The Worm
Friday on the byte
Scientists Name "Funky Worm" Amphibian After a Weird 70s Funk Song
Cow Chow
Thursday on the byte
Bill Gates Gives $12 Million to Flatulent Australian Cows
READ MORE STORIES ABOUT / Earth & Energy
Keep up.
Subscribe to our daily newsletter to keep in touch with the subjects shaping our future.
+Social+Newsletter
TopicsAbout UsContact Us
Copyright ©, Camden Media Inc All Rights Reserved. See our User Agreement, Privacy Policy and Data Use Policy. The material on this site may not be reproduced, distributed, transmitted, cached or otherwise used, except with prior written permission of Futurism. Articles may contain affiliate links which enable us to share in the revenue of any purchases made.
Fonts by Typekit and Monotype.