This Robot Can Pick Up Objects and Recognize What They Are

The "pick-and-place" system uses a deep neural network to ensure that it can pick any item up without dropping it. 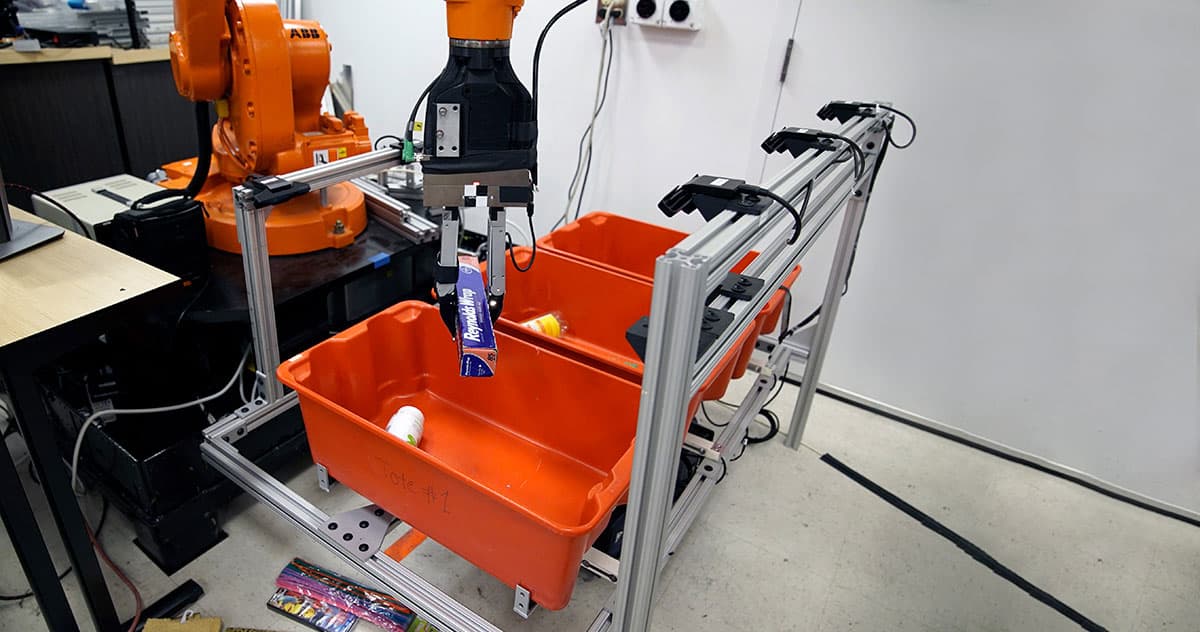 Robots are increasingly populating — and in some cases taking over — the workplace, performing tasks that humans aren't capable of, or making others more efficient. But they can't do it all just yet. One seemingly simple job that robots still struggle with is identifying objects and picking them up.

But researchers from MIT and Princeton have come up with a solution to improve the dexterity of robotic limbs.

The "pick-and-place" system is comprised of a standard robotic arm outfitted with a custom gripper and suction cup. An algorithm was written to allow the robot to grab an item from a bin of random objects and hold it securely without knowing anything about it beforehand.

It's this algorithm that allows the system to go beyond what current technology is capable of. Most robots that are used on production lines are carefully calibrated for one very specific movement. The researchers used a deep neural network to teach their arm how to handle any given object. The system recorded a 54 percent success rate using suction, a 75 percent success rate while grasping, and recognized objects with 100 percent accuracy during the Amazon Robotics Challenge.

The versatile artificial limb tackles the same challenge in four different ways: applying its suction cup vertically, applying it from the side, gripping vertically, and gripping vertically while using a separate tool to separate the object from a wall. During the experiment, the robot picked up object after object, while the researchers recorded successes and failures and fed the data into the neural network to teach the system how best to pick up various types of object.

A similar approach was used to develop the algorithm that manages visual perception. The researchers used stock photos to teach the robots to recognize each object in real life. The robot matched the pixels of each image with the right object using a set of on-board cameras.

The creators of the robot suggest that it could be used for organizing stock in a warehouse, grabbing things from a kitchen cabinet, or even digging through debris after an accident, to name a few. The idea is that the robotic arm — powered by machine learning — can tailor its approach to any situation, so its potential applications are very broad.

Read This Next
AI Boss
Amazon Used An AI to Automatically Fire Low-Productivity Workers
No Scrubs
This Grouchy Employee Hates Walmart's New Floor-Scrubbing Robots
Robot Overlords
A Quarter of Europeans Trust AI More Than Politicians
Robot Uprising
New Research: People Who Get Defeated By AI Feel Horrible
Everything's An Ad
This Guy is Hacking Printers to Warn About Job-Stealing AI
More on Artificial Intelligence
Not a Scientist, ...
Yesterday on the byte
Largest Publisher of Scientific Journals Slaps Down on Scientists Listing ChatGPT as Coauthor
ChatGPA
Yesterday on the byte
Mom Encourages Teen to Turn in Essay Generated With ChatGPT
AI Asshole
Jan 27 on the byte
BuzzFeed Columnist Tells CEO to "Get F*cked" for Move to AI Content
READ MORE STORIES ABOUT / Artificial Intelligence
Keep up.
Subscribe to our daily newsletter to keep in touch with the subjects shaping our future.
+Social+Newsletter
TopicsAbout UsContact Us
Copyright ©, Camden Media Inc All Rights Reserved. See our User Agreement, Privacy Policy and Data Use Policy. The material on this site may not be reproduced, distributed, transmitted, cached or otherwise used, except with prior written permission of Futurism. Articles may contain affiliate links which enable us to share in the revenue of any purchases made.
Fonts by Typekit and Monotype.