Buckle Up
Mar 21 by Dan Robitzski
Buckle Up
/Off World 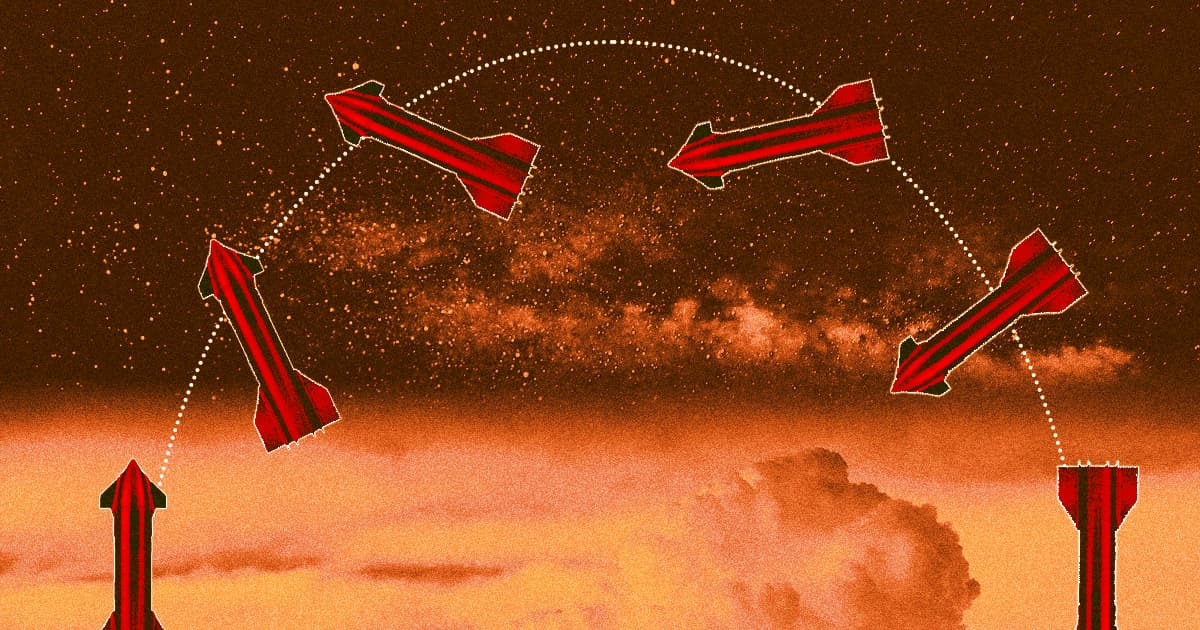 If you’ve watched any of SpaceX’s recent test launches, Starship prototypes have engaged in a white-knuckles mid-flight maneuver before descending back to Earth.

Before landing, the Starship prototypes are designed to pull off a “belly flop” in which they switch off their engines, flip onto their front, and freefall horizontally before righting themselves — almost like a dolphin leaping out of the water. It’s an incredible display of spacecraft maneuverability, but nailing the flip is crucial for SpaceX. These are just prototypes, but SpaceX expects the finished Starship product to return to Earth’s atmosphere on its side, using the air around it to slow its fall before righting itself and landing on its feet. It’s a cool idea, but it would also make for an interesting ride for anyone on board.

The maneuver raises a serious question. The Starship is supposed to carry human passengers into space, so what would it feel like to actually be inside one during a belly flop?

To get to the bottom of it, we tapped Christopher Combs, an assistant professor of mechanical engineering at the University of Texas San Antonio. You might recognize Combs as one of the experts who weighed in on a previous Futurism thought experiment — whether you could climb inside of a SpaceX Rideshare cargo launch and have any hope of surviving the journey. Thankfully, he says, the bellyflop should be substantially less perilous — once SpaceX figures out how to stop Starship from exploding afterwards — but we still wanted to figure out what it would be like to be on the inside.

Here’s our conversation, edited and condensed for clarity.

Futurism: The Starship prototypes are doing this weird belly flop maneuver during their test hops. Aside from our question of rider experience, can you talk a little bit about what SpaceX is doing with this flipping technique and why it’s showcasing this maneuverability?

Christopher Combs: You don’t have to do a belly flop to make a hop work for a few kilometers. They’re trying to demonstrate this and showcase it because when they actually get up to orbit or get close to orbital speeds, then this thing has to slow down. You can’t just come straight in with this kind of vehicle.

They want to aero brake a little bit and kind of glide or coast into wherever they’re going to land. When things are moving as fast as that or you’re dealing with hypersonic aerodynamics, a rounded body is actually preferred in a lot of ways. They’re kind of taking advantage of that saying, “Well, we’re going to reenter, sort of turn this thing on its side, and fly up and use the flaps to control how we’re coming in to basically be able to appropriately slow things down so that we don’t have to use the rockets the entire time.”

Is that approach unusual? The other rockets that SpaceX has reused haven’t returned sideways.

Combs: I mean, unless you want to count the Space Shuttle. So it’s almost like they said “Well, what if you took the Space Shuttle, but instead of putting wheels on it and landing on a runway, you wanted to land vertically with a rocket?”

The Rideshare experiment that we talked about has an unhappy ending no matter how you look at it. But the Starship is actually expected to carry humans into orbit. But it seems like this maneuver would still make for a bad time.

Combs: I mean, I don’t know. I guess “bad” depends on your perspective, right? If you’re a person that doesn’t like roller coasters, I don’t think you would like this. This isn’t going to be your Southwest Airlines flight — there will probably be some discomfort. It’s not going to kill you, obviously. I do wonder if it’s one of these things where they say, you know, people with certain conditions maybe shouldn’t do this. I would assume that that’s going to happen.

I mean, for spaceflight, I would kind of figure it would be a little bit stricter than “You must be this tall to ride.”

Combs: Yeah, right. One interesting thing about the flip, though, in terms of G-force: FlightClub.io has done modeling of these Starship tests to find the Gs that the vehicle experience. They were seeing two and a half or so, which is pretty manageable, especially for short times. That’s nothing too scary.

And in terms of the flip maneuver, it depends on where they put people. Where is your center of gravity relative to your center of pressure, and where are you sitting in relation to those points — that’s going to determine how much force you actually see. But if you watch the videos and if you look at some of the things SpaceX has posted, the Starship kind of rotates more or less about the nose cone. So most of the rotation is happening closer to where the rockets are because of how they use the flaps and how they orient their axis of rotation when they do that maneuver. And I’m certain that that’s intentional.

Is that just a function of the rockets being at the bottom so the top rotates less? Is that something that needs to be deliberately designed?

Combs: It depends on the location of the rockets, the location of the flaps, how the flaps are oriented, and the weight distribution of the rocket. We have a center of gravity, which is a kind of a geometrical and mass-determined thing. And then you have a center of pressure, which determines about what center your aerodynamic loads are acting. Those two things are going to determine how something rotates when a given force is applied. That’s important in aircraft design and all kinds of things. And so they’ve set it up in a way, with their design, so that the axis of rotation is very close to where the crew is going to be located or where passengers are going to be.

I am inferring that you’re not going to feel a lot of Gs from the flip, I don’t think, because of where they’re able to locate that axis, but you’re still going to spin a little bit. You’re still experiencing some Gs from the deceleration — although not a crazy amount — so it will be a little bit uncomfortable and a little bit disorienting, maybe? Because you’re going to be spinning. But not life-threatening stuff. Um, I wouldn’t eat a hot dog on the flight. It might feel kind of carnival ride-ish.

Do you think it matters where you’re sitting?

Combs: I think it’ll be a little bit different but not substantially. And I’m not exactly sure how they are going to orient people. But like, you’re all kind of on the same ring. Depending on exactly how the axis lines up there will be some people that hardly feel anything, I think, and some people that get a little bit more. But still, it’s not like the difference you would experience if you were down at the rocket end.

This has to be deliberately designed for people. And I was curious if you had any thoughts on kind of the considerations that go into that from a technical standpoint. Are there extra steps that go into this that are designed to make the ride and especially flipping around more survivable, or maybe less nauseating?

Combs: These are rockets, so you can manage things like thrust and impulse, and you design all that in. You can take things a little bit slower [than a cargo launch], maybe you pay more attention to how much things are vibrating, and you design more into, you know, making the environment comfortable.

We’ve shown you can do this with the human space flight that’s already happened, and there’s going to be different standards for human space flight, but yeah, you would put different load limits and different types of force limits on your design. And you design how you’re going to fire all of these engines up and everything like that. So yeah, you would handle it differently than then you would if it’s just instrumentation or whatever. It’s a consideration that you would make, but it’s not something that is unthinkable.

It’s certainly different for crewed versus cargo launches, but what about flipping over and belly-flopping versus a vertical takeoff and landing?

Combs: Kind of like we talked about, they had to make some considerations about where people were going to be relative to where the vehicle was going to rotate. They have got some limits on how hard they can make that maneuver and how fast they could do it. Those are considerations that would have to be made because you’re kind of bridging the gap between what you do on an airplane and what you do with spacecraft.

They would definitely need to kind of keep those things in mind. But at the same time, I do think there is a lot of engineering experience about what people can handle in terms of those types of loads and forces and experiences between all the stuff we’ve done in space flight, but then with aircraft as well. So there’s a lot of legacy knowledge.

I’d say [SpaceX has] some design limits, but they have to they’re obviously going to have to continue to engineer things in a way where they can consistently [land successfully].

I want to ask about the explosive aftermaths that we’ve seen because, you know, obviously those are problems. Those don’t necessarily reflect the crew’s experience, barring a tragedy, but is there a balance that needs to be struck between building a rocket that’s comfortable and building a rocket that works well?

Combs: It’s just raising the bar in your design. That’s not to take anything away from what SpaceX is doing. These have all been prototypes. This kind of stuff happens when you’re doing stuff for the first time.

Right. And they blow up and they learn a lot from it.

Combs: Yeah, and then you learn a lesson and you fix it. The fascinating thing about what SpaceX does is that they’re learning all these lessons very publicly and with full-scale tests. And a lot of places don’t do that. They’re able to learn lessons really fast. We’re kind of seeing the design process play out in front of us, which is an incredible thing to watch.

But yeah, they learned their lesson and SpaceX has shown they don’t continually make the same mistakes over and over. They’ll fix one thing and then maybe something else pops up, but eventually they get it all figured out, which I anticipate is going to happen here because they’ve got good problem solvers there.

And they were close last time. They were so close.

Combs: Yeah, right. We’re past the point of “Can this work?” They’re just fine-tuning things, getting the details sorted out, getting this valve right or getting this pneumatic to work the way that it should, or making sure this leg doesn’t fail in this way. And that’s just engineering. Once they get to that point, then things should get really repeatable.

More on SpaceX: Could I Climb Into a SpaceX Cargo Rideshare and Yeet Myself Into Space?