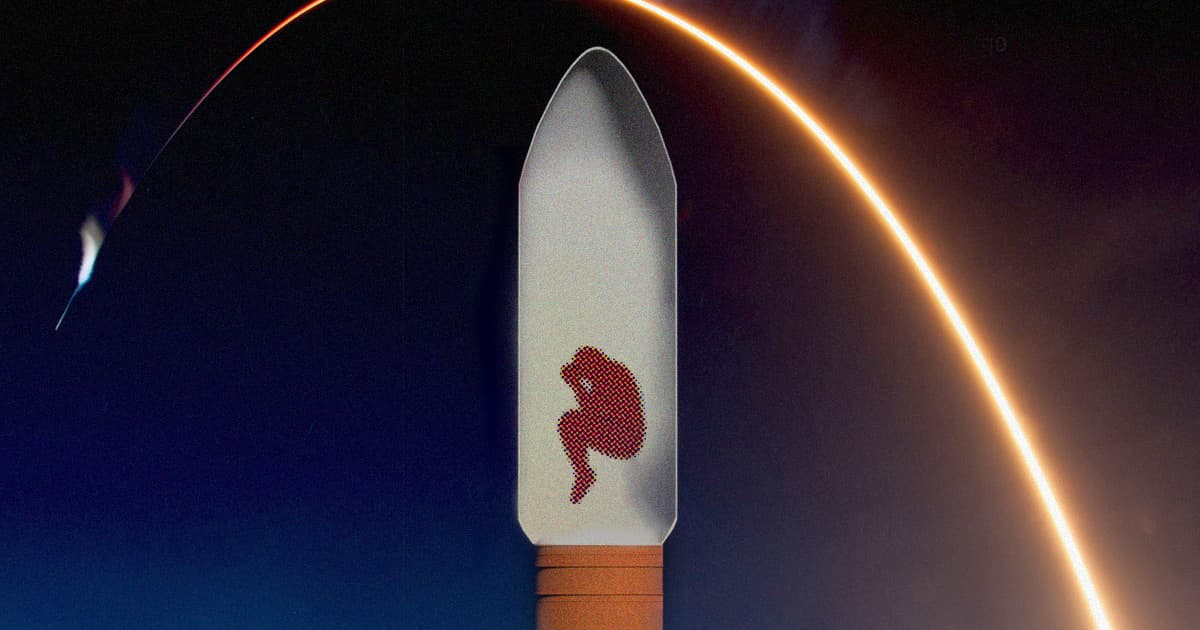 Fewer than 600 people have been to space in the entire history of humankind, and I want to be one of them.

Flights to space are expensive, though, and training to be an astronaut is a grueling endeavor. So I have a different idea: I want to hitch a ride into orbit on the SpaceX Rideshare program. Normally it's used to carry satellites and other cargo into orbit, so my plan would be to buy a used spacesuit on eBay, climb in, and hope for the best.

After decades of space exploration, scientists have gotten pretty good at sending humans into orbit. But a ride on a space shuttle like SpaceX's Crew Dragon, which is carefully designed to safely deliver astronauts to their destination without, well, killing them, costs around $90 million.

I don't have that kind of money, but launching a payload on SpaceX Rideshare only costs about $1 million — an incredible deal by comparison!

Of course, hitching a ride and yeeting myself into orbit would be an even more dangerous version of riding down Niagara Falls in a barrel. So I got in touch with Erik Antonsen, an engineer and a professor of both emergency and space medicine at Baylor College of Medicine. Antonsen also serves as Chair of the Human Systems Risk Board at NASA Johnson Space Center, where he helps ensure that astronauts are as safe as possible, though he made it clear that he was speaking as faculty at Baylor, which sells his time to NASA.

"You're just lying there and trying not to die."

I asked Antonsen what he thought the biggest hazards would be during my journey.

"Besides everything?" he replied.

Unfortunately, Antonsen is not optimistic about my chances. In June, SpaceX published a user's guide for Rideshare customers that details the conditions that their satellites and cargo — or in this case, my body — would experience during the journey. There's a lot of noise, near-boiling temperatures, intense vibrations and jostling, dangerous acceleration, and the pesky issue that my compartment wouldn't be pressurized.

Antonsen helps with the process of human systems integration, which is basically taking into account all of the human needs of spaceflight.

"You're gonna experience a lot more problems that are probably going to kill you pretty quickly," he said. "The difference between a satellite launch and a human launch is all of the human systems integration that gets layered on top of the launch for a satellite."

None of those considerations, he says, happen with cargo launches like the Rideshare program. All in all, Antonsen predicted that I would have about 10 to 20 seconds before I lost consciousness, probably for good. That isn't quite long enough to get the dazzling views of our pale blue dot that I'm hoping for.

And I'd definitely need a suit. Without one, Antonsen says I would swell up and die like a cartoon character, due to a process called ebullism. Without atmospheric pressure, the water under my skin would boil, causing my skin to balloon up and shredding my lungs.

"They cook, their eardrums probably explode, the ebullism is probably going to kill them pretty quickly after launch, and then their body's going to be tossed around like a ragdoll until their body is gracefully released into the cosmos," Antonsen said.

"Some people want to go out like Elon Musk's car and maybe end up orbiting Mars. But they won't live very long during that."

But there may be some ways I can prolong or even survive my journey, said Christopher Combs, an aerospace and propulsion engineer at the University of Texas at San Antonio.

He scrutinized SpaceX's user's guide and approached the thought experiment as an engineering challenge. Within my designated cargo area, I'd have about 150 kilograms, or 330 pounds, before the price of my ticket begins to climb. As an act of self-care, I haven't weighed myself since the pandemic began. But Combs suspects that I would have enough weight left over to fashion a sort of mini cockpit, complete with a chair and restraints, so that I could align myself properly and protect myself from the potentially lethal bumps and whiplash associated with a trip to space.

"And the physical volume is actually a decent size," Combs said. "The length dimension, the longest dimension is actually ten feet. You could cram in. It's like four feet tall."

Antonsen had mentioned that unless I'm lined up perfectly, the acceleration of the launch could force all of my blood down in the wrong direction. But strapped into a chair, Combs suggests that I would experience forces similar to the unpleasant-but-livable ones that astronauts do.

"Depending on who you are, you might pass out," Combs said. "You wouldn't really be able to do anything, but if you're just in, like, a satellite port you probably wouldn't need to."

"You're just lying there and trying not to die," he added.

As long as the chair worked, I brought my own oxygen supply, and I had a spacesuit that protected against the heat and depressurization, Combs thinks I could possibly survive my journey. As a wannabe space explorer, I certainly prefer Combs' optimism for my chances — but even he says that my luck would run out pretty quickly.

"I think you can get to space! I think there's a way you could engineer this thing to get you into space," Combs said. "But then it's getting back that's problematic. I think the one-way trip is doable, but this thing is going to treat you like a satellite and put you in orbit at like six kilometers per second."

"Either you're staying in orbit forever, or for your lifetime I guess, or you're coming back down."

In other words, I'd either die a lonely death in orbit or incinerate as I re-enter the atmosphere at hypersonic speeds.

"If you get out and hitch a ride, where are you ending up and how are you getting back?" Antonsen said. "Some people want to go out like Elon Musk's car and maybe end up orbiting Mars. But they won't live very long during that."

Unfortunately, even with a spacesuit, Antonsen doesn't think I'd reach that point. Even after a successful landing back on Earth, crewmembers with every protection in place are still at risk of dehydration, motion sickness, fainting, and injury. NASA imposes rigorous standards for noise, heat, acceleration thresholds, vibration, and other risk factors.

"Without all of them in place, you're probably going to die not too long after takeoff," Antonsen said. "And in a really messy way."

If there's any takeaway from this, it's that spaceflight is hard, and that there are decades of experimentation already in place where scientists figured out how to do it safely. For instance, I asked if there's a chance I could survive the extreme heat of the Rideshare launch, since it only lasts a few minutes. But Antonsen didn't budge.

"It's one of those things that's just one more log on the fire of your funeral pyre," he said.

Part of the reason that NASA engages in public-private partnerships with spaceflight companies like SpaceX is to help transfer those decades of knowledge so that the companies don't need to start from square one and launch safer flights from the get-go.

"In many cases, they may not realize what these challenges are because they haven’t experienced them," Antonsen said. "They haven't gotten there yet. And the reality is, at some point they're going to get there."

Antonsen and Combs both told me they're excited for the future of passenger spaceflight — and it seems like if I want to make my way into orbit, I should unfortunately just cough up the dough for a real ticket.

SpaceX repeatedly declined to comment or answer specific questions for this article.