If you’re anywhere on social media, you’ve probably seen this video being shared:

Scribble, the “revolutionary pen that draws in any color [!]” from Scribble Technology claims that it is able to scan color from any object and instantly reproduce the color on paper or a digital screen.

According to the Scribble team,

“We’ve been in the design process for two years and the Scribble has gone through various design changes to get it to where we are now, a working prototype that’s ready for use in home and business applications. Because of its small size we have created a number of innovations never seen before in the color reproduction industry.”

Sounds great, right? Like many, you’ve probably been questioning: Just how can this piece of technology work? We wondered the same thing – and we’re here to report the science behind the tech, or rather, that there doesn’t seem to be any.

In short, that the Scribble Pen might be too good to be true (all evidence seems to point that way, at least).

It looks like the first evidence of the Scribble Pen was on Kickstarter in August 2011. Three years later, “funding for this project was cancelled by the project creator” despite the fact that the team raised $366,566. That’s more than three times their original goal. They even reached the goal within five hours of launching the campaign.

“In view of the many requests to better see and understand how the Scribble Pen and Scribble Stylus works, we are currently shooting another video in more depth which will be available sometime next week .

However, We received an email from kickstarter dated 08/12/14 requesting a new and more illustrative video within 24 hours, so we had to cancel the project with hopes of restarting it again  with a much more detailed video.

We fully assure you that there is no reason to panic and our team is doing its very best to come up with a much better and very informative video that will put all your questions and concerns to rest.”

See? No reason to panic. They just needed to make a better video.

Not long after announcing the cancellation, the team announced the relaunch of the campaign. However, they chose to do it through their own crowdfunding website. The Scribble team wrote that Kickstarter’s specifications were “arbitrary,” “not known to us upfront,” and “the ultimatum was impossible to meet.”

The Scribble team moved their campaign to Tilt, another crowdfunding platform. However, Tilt closed the campaign because “the creators again failed to provide sufficient details.” They wrote,

“Upon the internal review, we requested additional information from the campaign organizers and provided a defined window of time for them to provide a new video of an actual, working prototype like seen in the video OR an in-person prototype of the pen. Since these conditions were not satisfied, we decided that the best course of action to protect our community — both contributors and organizers — was to discontinue the campaign and refund 100% of all payments over the next three days.”

Before being cancelled, the pen raised $227,540 on Tilt. The creators claimed that Tilt’s issue was that they only had a prototype, and the product wasn’t 100% ready. Funny that literally thousands of other creators ran successful campaigns with only prototypes, but sure.

So what have we got here? The team isn’t having a lot of success on these crowdfunding platforms, but that doesn’t mean their product isn’t great, right?

Not quite. In an imgur post, user ilikepie641 describes how he found a “glitch” in Scribble’s original Youtube video, revealing that the drawings may have been faked and put in during post production. Numerous other posts on imgur note similar discrepancies.

Reddit got involved next. A word of warning: Take what comes next with a grain of salt because, well it’s reddit.

A reddit user named wanderingjew claims to have written this article, where he explains that The Guardian interviewed “someone who didn’t exist” for their coverage of the Scribble pen. The thread goes on to claim to have identified the guy behind the original Kickstarter.

The article that the thread cites reveals that “there is no footprint of the company or the founders – Robert Hoffman and ‘Mark Barker’ – existing. E.g: ‘Not one of these three people can be found on LinkedIn as being employed by Scribble, or even working in the San Francisco area in a tech startup. Outside of the many blog posts on the Scribble pen, these people do not exist on the Internet.'”

In addition, the author of the article says he has done some digging and found that, “in all fifty states, there is no record of a company named Scribble registered in the past two years.” The author believes, “there is one reason why Scribble can not be found in any state registry of businesses: Scribble could be ‘Doing Business As.’ This means the founders of the company would be held personally liable for any legal action taken against the company.”

Meaning, if Scribble does not fulfill its preorders, anyone who contributed to the campaign could file a suit that would impact the company owners directly.

Finally, the author searches US Trademarks and does not find the pen. However, he states, “this does not prove there is not a trademark application for a Scribble pen – considering the Scribble Facebook page was set up in May of this year, we’re right on the threshold of when the trademark application would be published. Given the lack of a registered business, and any sort mention on the Internet of the people working on Scribble, it’s improbable there are any trademark applications pending.”

Some reddit users had first hand experience with the company. When reddit user callmeDNA signed up to be a tester for the prototype, he received this email,

“We regret to inform you that we will have a slight delay with the expected shipping date of the Beta Test Kit. Our engineers are experiencing some technical issues with the advanced color sensor that the pen uses.

As you know, we are creating an innovative product, never seen before, and we appreciate your understanding!”

Reddit user Irnblk also ordered prototype. The following is from an email sent to him by Scribble,

“After much soul searching we have decided to delay the shipments until August 1st, 2015, so as not to compromise the product in any way. We intend to deliver only the best and highest quality writing instrument to you.” 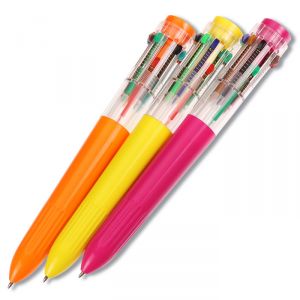 But honestly, you’re better off with one of these. Why? Because these pens actually exist and the creators are upfront about the tech behind the product, so you can analyze it and determine if the science is sound for yourself.

Still, if you want to throw hazard to the wind, the magical color pen will (supposedly) ship in mid 2016. Oh, but your card will be charged immediately upon preorder. In a final word, the company reminds buyers to “please note that the product’s final form is subject to change as we continue to develop the product.”

Our guess? We’re probably all going to receive an empty box.

HEXA Is an Agile, Spider-Like Robot That You Can Program Yourself

This Watch Changes Your Perception of Time

New Device Lets You Send Terabyte-Sized Files From Your Phone