Turns out, the cat is alive and dead and in two places at once. And it could revolutionize quantum computing. 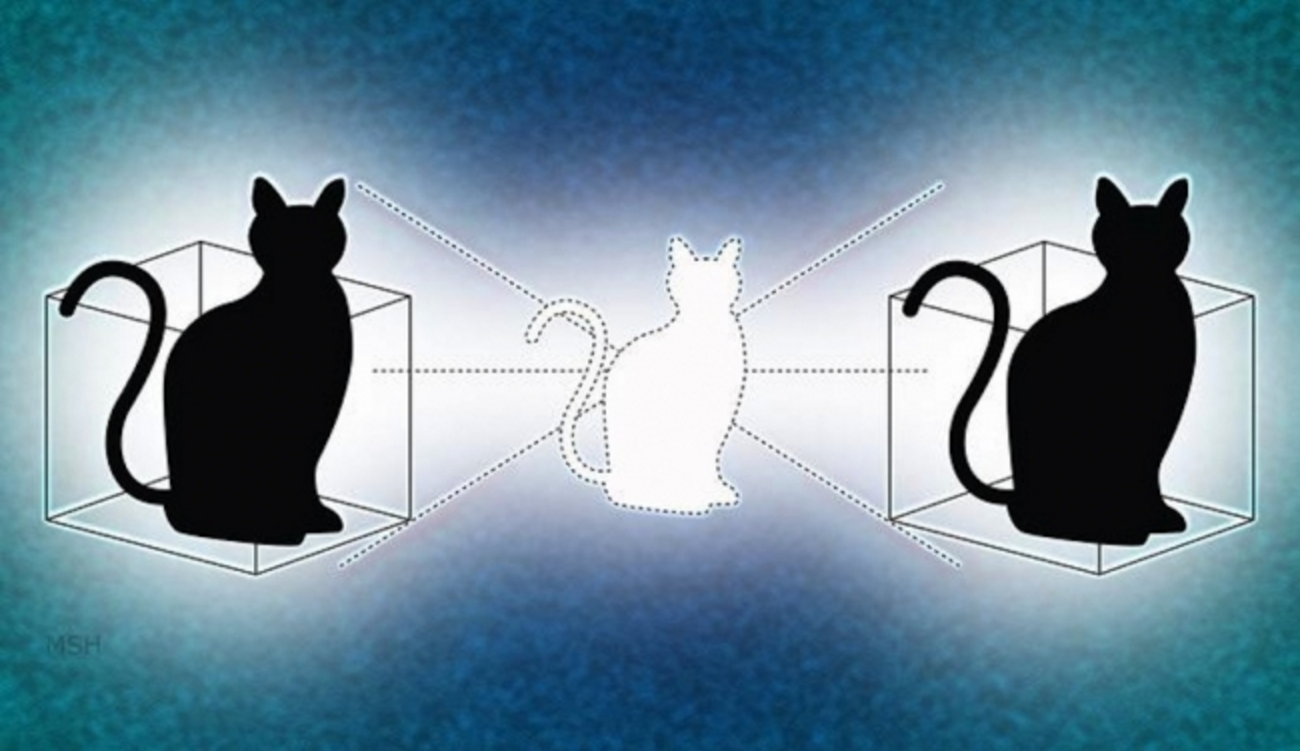 Scientists have just kicked the famous Schrodinger’s cat thought experiment up a notch by cutting that poor old hypothetical cat in half, sticking him in two boxes, and confirming that he still survives - and doesn’t - even when there’s two of him.

And you want to know the best part of this experiment? The team took the whole thing out of the realm of pure theory and actually performed it in the lab. But don’t worry, no cats were harmed in the process.

Before we actually go into the details of the new experiment, let’s run through the basics of the original Schrodinger’s cat thought experiment.

The hypothetical scenario is that you put a live cat in an explosion-proof box with a bomb. Until you open the box, you'll have no idea if the bomb exploded and the cat died, or maybe the bomb didn’t explode and the cat is still alive.

For as long as the box is shut, the cat is occupying two realities - from our perspective. It’s dead and alive, because we can’t confirm which one, but we know it can’t be neither.

In quantum physics, being in two different states at the same time is known as a superposition state, and it’s the entire basis of quantum computing, which is set to revolutionise how we process data in the future.

The point is that, in reality, there’s only one real option, but until we observe that reality, the two options stand.

For a really quick rundown of all of this, watch the MinutePhysics video below:

A New Kind of Cat

Okay, so that’s the basis of the Schrodinger’s cat experiment. Researchers have now taken it out of the hypothetical realm and performed it in the lab, not with actual cats, but with electromagnetic waves in the form of microwave photons.

Just as quantum particles can exist in superposition - which is what gives the whole cat experiment some practical applications i.e. computing and understanding the behaviour of the smallest building blocks of the Universe - so too can electromagnetic waves.

Photons can be polarised both vertically and horizontally at the same time until someone actually measures their polarisation, and microwave photons can be coaxed into this cat-like state too.

"Normally, electromagnetic waves in the box will oscillate in strength, like a pendulum sweeping back and forth," Joshua Sokol explains for New Scientist. "But it’s possible to introduce the opposite wave into the box, creating a cat state that is doing two seemingly contradictory things at once."

That’s what a team of physicists led by Chen Wang from Yale University did to demonstrate the basics of the Schrodinger’s cat thought experiment in reality. "A mechanical analog of this would be a pendulum that is simultaneously oscillating to the left and to the right," he told Sokol.

But once they’d got that down the team took things one step further, by asking, "What if there were two cats?"

Basically, the 'cat' isn’t in one box or the other. It’s in both, because they’re inextricably linked.

They did this by building two aluminium cavities - the boxes - and release microwave protons inside them. The cavities were connected by a superconducting sapphire chip and an aluminium circuit, which provided a sort of 'tunnel' that the protons could travel through.

The trick is that this could be turned on or off, and depending on that state, the protons would oscillate at different frequencies. "This being the quantum world, though, it is possible to have the linking bridge be both 'on' and 'off' at the same time," says Sokol.

"Once that happens, both cavities will have two frequencies at once," Wang told him.

When the link between the two boxes was shut down, the team found that the photons in the two boxes were still connected - the cat that had been sawed in half was still behaving like it was whole, just like that old magician’s trick. Basically, the 'cat' isn’t in one box or the other; it’s in both, because they’re inextricably linked.

"The scientists measured the cat states produced and found a fidelity of 81 percent - a measure of how close the state was to the ideal cat state," Emily Conover explains for Science News.

And then there's quantum entanglement

How is this possible? Enter entanglement, a central concept in quantum physics that allows a local observation to change the state of a distant object instantaneously, or, as Einstein once called it, "Spooky action at a distance".

To bring this back to reality, that means the electric field will always be in sync in both cavities, and that’s good news for scientists around the world who are struggling to build a real quantum computer.

"The two cavities could serve the purpose of two quantum bits, or qubits," says Conover. "One stumbling block for quantum computers is that errors inevitably slip in to calculations due to interactions with the outside environment that muck up the qubits’ quantum properties. The cat states are more resistant to errors than other types of qubits, the researchers say, so the system could eventually lead to more fault-tolerant quantum computers."

The next step for the team is to scale up their experiment so it really can be applied to an actual quantum computer. That means demonstrating the same level of fidelity across more than two 'boxes'. We have no idea what that would look like, but holy crap, it'd be cool.

You can find the results of this experiment in today's edition of Science.

Read This Next
Quacks Like a Duck
Those Headlines About Scientists Building a Wormhole Are Total Nonsense, People
Big Yikes
Turns Out Schrödinger, the Father of Quantum Physics, Was a Pedophile
Good Samaritan
Physics Dept Gets Random Box Full of $180K in Untraceable $50s and $100s
Brands We Love
Go Beyond The Science Headlines With The Fundamentals Of Physics Course
Quantum Teleportation
Scientists Are Building a Quantum Teleporter Based on Black Holes
More on Hard Science
Horrible Geese
Dec 4 on futurism
Furious Geese Are Defeating Humans, Scientists Find
It From Bit
Nov 22 on the byte
A Scientist Is Crowdfunding an Experiment to Check if We Live in a Simulation
Water Carrying
Nov 20 on the byte
Evidence Grows That Soggy Meteorites Gave Earth Its Oceans
READ MORE STORIES ABOUT / Hard Science
Keep up.
Subscribe to our daily newsletter to keep in touch with the subjects shaping our future.
+Social+Newsletter
TopicsAbout UsContact Us
Copyright ©, Camden Media Inc All Rights Reserved. See our User Agreement, Privacy Policy and Data Use Policy. The material on this site may not be reproduced, distributed, transmitted, cached or otherwise used, except with prior written permission of Futurism. Articles may contain affiliate links which enable us to share in the revenue of any purchases made.
Fonts by Typekit and Monotype.