If You're Thirsty, You're Already Dehydrated. But This Rapid Hydration Mix Can Help.

Hydrant is better for hydration than sports drinks or water alone. 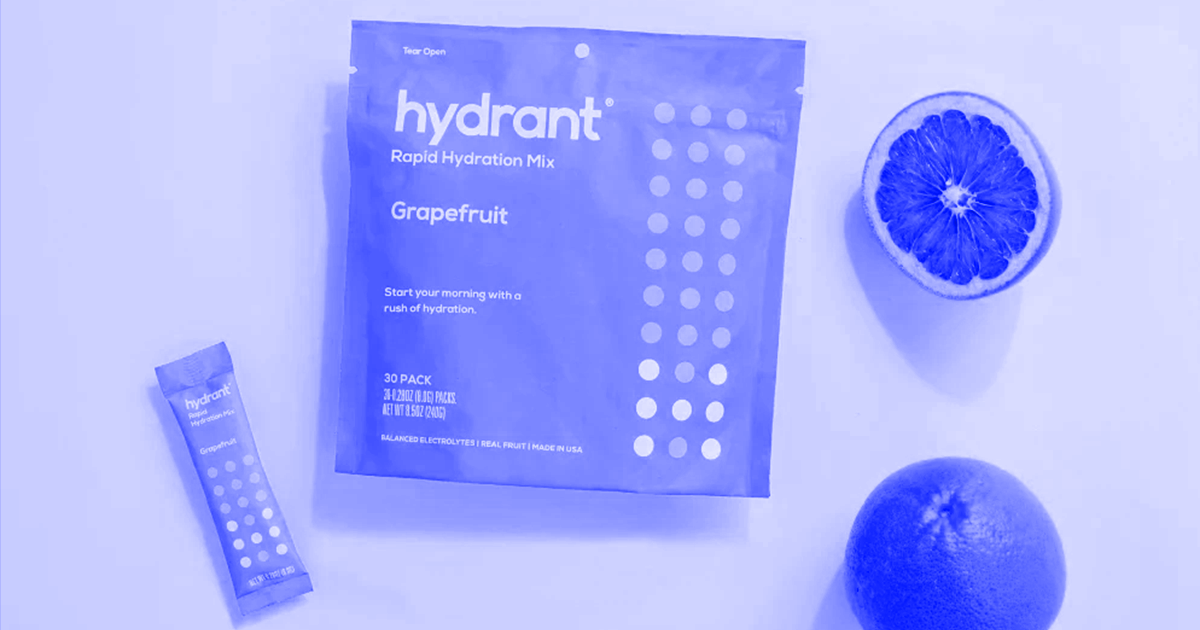 Water is a little bit like sleep and love in the sense that almost nobody is getting as much as they need. One recent study showed that as much as 80 percent of the population reported not getting enough water every day, which doesn’t even count those of us who unknowingly aren’t hydrating enough. Basically, almost everyone should take steps to improve their daily hydration. And thanks to Hydrant, a specially formulated rapid hydration mix, it's easier than ever and even better than drinking water alone.

If you regularly find yourself not getting as much water as you should, a hydration mix like Hydrant is the perfect remedy. It contains a scientifically developed blend of electrolytes and sugars that activate your body’s sodium-glucose pump, allowing for faster and more efficient hydration. In fact, it contains three times the electrolytes of a typical sports drink. All you have to do is mix it with a glass of water in the morning and enjoy its natural flavoring made with real fruit juice, and you'll be good to go.

Everyone knows that water is needed to ward off the side effects of dehydration, which include lethargy, muscle cramps, headaches, and over a long enough timeline, even death! But contrary to popular belief, thirst is not a warning sign that you're approaching dehydration. Dehydration has already begun by the time you feel thirsty. So if your usual routine is to drink water when you feel parched, you're already too late. But a daily dose of Hydrant Rapid Hydration Mix helps stop dehydration before it starts.

Hydrant’s Rapid Hydration Mix is billed as a morning mix, but it’s great at any time of day, especially when you’re less likely to have enough water in your system -- like during workouts at the gym. It's great at helping you maintain water even more effectively than typical sports drinks.

Speaking of sports drinks, many of them have too much sugar and artificial ingredients to be considered much use nutrition-wise, especially if you aren’t sweating gallons of it off right away. Hydrant, on the other hand, has 80-percent less sugar than most sports drinks, which is just enough to activate that sodium-glucose pump and provide flavor.

What kind of flavors does Hydrant come in? Six and counting, which is good news for anyone who considers it a chore drinking water. These include orange mango, grapefruit, lime, blood orange, iced tea lemonade, and fruit punch.  You can also order a variety pack and see which ones you like best.

A 30-pack of Hydrant Rapid Hydration Mix will cost you $37.49, but you can save money with a monthly subscription for $29.99 per. And you can cancel the subscription -- or change your flavor -- whenever you like.

So if you’re tired of the choice between forcing yourself to choke down glass after glass of water, or facing the effects of chronic dehydration, order your first 30-pack of Hydrant Rapid Hydration Mix from Hydrant’s online store now.

Read This Next
Brands We Love
This Simple Home Water Test Tells You Exactly What's in Your Drinking Water
Brands We Love
This Specially Formulated Mix Helps Prevent Dehydration Better Than Water Alone
Brands We Love
If Your Kids Love to Learn, This Science Kit Subscription Service Is a Must
Brands We Love
Every Science Lover Needs This Subscription Box in Their Life
Brands We Love
Chemistry Kits From Mel Science Are Perfect for the Mad Scientist in Your Life
More on Hard Science
Warped Tour
Feb 2 on futurism
Professor Believes Door to Warp Drive May Lie With Ethylene Glycol
Sky Bursts
Feb 2 on the byte
Astronomers Intrigued by 25 Mysterious Repeating Radio Signals From Deep Space
Tractor Beam
Jan 26 on the byte
Scientists Build Working Tractor Beam, Although It's Comically Tiny
READ MORE STORIES ABOUT / Hard Science
Keep up.
Subscribe to our daily newsletter to keep in touch with the subjects shaping our future.
+Social+Newsletter
TopicsAbout UsContact Us
Copyright ©, Camden Media Inc All Rights Reserved. See our User Agreement, Privacy Policy and Data Use Policy. The material on this site may not be reproduced, distributed, transmitted, cached or otherwise used, except with prior written permission of Futurism. Articles may contain affiliate links which enable us to share in the revenue of any purchases made.
Fonts by Typekit and Monotype.