A memo called the service an "unnecessary bureaucracy that costs $16 billion in 2021." 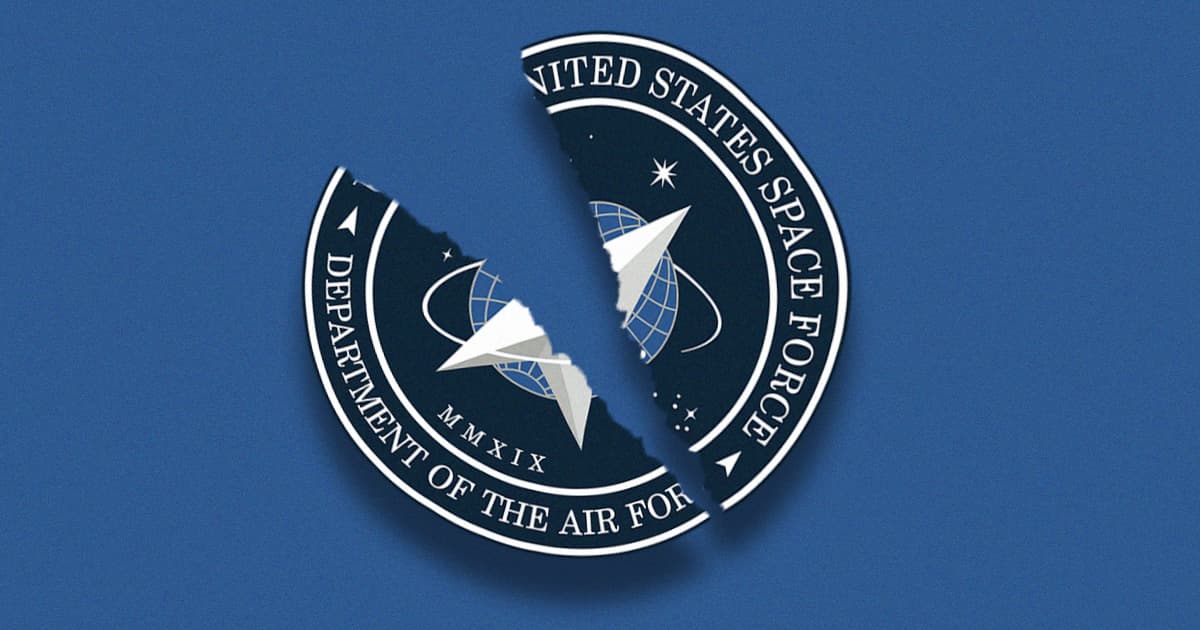 According to a memo first obtained by Politico, progressive groups are planning to pressure president-elect Joe Biden's transition team into slashing military budgets — with one specific aim being to eliminate the US Space Force.

The memo calls out the Space Force as an "unnecessary bureaucracy that costs $16 billion in 2021" and militarizes space, as quoted by SpaceNews, which obtained the memo as well.

The $16 billion referred to by the memo technically came out of the budget of the Air Force and was requested for the 2021 fiscal year back in February. It's also dwarfed by the Pentagon's overall $740 billion budget.

The Space Force is the youngest arm of the military, established in December 2019 when president Donald Trump signed the US Space Force Act. Congress made the decision permanent with the 2020 National Defense Authorization Act.

The service's main mandates are rather murky. It's focused on protecting US interests in space, including the overseeing and development of satellites, and deterring aggression in space.

Trump has done little to pin down the group's mandate, often falling back on verbiage about being "number one" in space.

"Amid grave threats to our national security, American superiority in space is absolutely vital," he said during the official launch in December 2019. "And we’re leading, but we’re not leading by enough. But very shortly we’ll be leading by a lot."

The service has already faced a good deal of criticism over its short history. Early on, it was deemed a "bureaucratic mess in search of a problem" by the media, and characterized as a reshuffling of existing personnel more than anything concrete.

The Space Force still has plenty of ties to the US Air Force and has been slow to recruit personnel. Approximately 16,000 military and civilian space staff were assigned upon its creation in 2019, and in June, more than 8,500 active-duty Air Force service members volunteered to join the service.

But eliminating the Space Force would be no easy task. In fact, Biden would not technically have the power to do so alone, as SpaceNews points out.

"Surely the Biden administration will have more pressing legislative priorities than this in the context of COVID, the economy, and domestic priorities," adjunct senior fellow at the Center for a New American Security Sarah Mineiro, who helped draft legislation of the Space Force and Space Command, told SpaceNews.

More on Space Force: The Space Force Is Building Satellites That Resist Jamming

Read This Next
Close Encounters of the Bored Kind
The Long-Awaited UFO Report Was Honestly Kind of Disappointing
Trademark Battles
Oops: Netflix Trademarked "Space Force" Before the US Military
Like a 6G
Trump Calls For "6G," Which Doesn't Exist
Futurism
Donald Trump Is Still Going in on Jeff Bezos and Amazon, Still Getting Basic Facts Laughably Incorrect
Futurism
There Are Strict Rules About What Some Federal Employees Can Say on Social Media
More on Future Society
Musk's Guns
6:50 PM on the byte
We Are Alarmed by Every Detail of Elon Musk's Bedside Table
Head Like A Hole
Nov 23 on futurism
Elon Musk's Crying About Trent Reznor Shows That He Is a Big, Big Baby
Miserly Musk
Nov 22 on the byte
Cheapskate Elon Musk Refusing to Pay Bills at Twitter
READ MORE STORIES ABOUT / Future Society
Keep up.
Subscribe to our daily newsletter to keep in touch with the subjects shaping our future.
+Social+Newsletter
TopicsAbout UsContact Us
Copyright ©, Camden Media Inc All Rights Reserved. See our User Agreement, Privacy Policy and Data Use Policy. The material on this site may not be reproduced, distributed, transmitted, cached or otherwise used, except with prior written permission of Futurism. Articles may contain affiliate links which enable us to share in the revenue of any purchases made.
Fonts by Typekit and Monotype.