This is far cheaper than the Oculus Rift or the HTC Vive.

During the Game Developers Conference in San Francisco, Sony announced that the PlayStation VR headset will be launching in October 2016 with a price tag of only $400, making it the cheapest of the current crop of VR headsets, including the Oculus Rift ($600) and the HTC Vive ($800).

It’s important to note though that $400 only gets you the VR headset itself and does not include the Move controllers or the PlayStation Camera, the latter being necessary for the using the system’s positional tracking capabilities.

But although the entirety of the VR system will be sold separately, it’s not too expensive—with the PlayStation Camera at just $44 and the Move Controllers sold at $28 each.

PlayStation VR marks Sony’s entry into the growing medium of virtual reality entertainment. Given the codename Project Morpheus during its early development stage, the PS VR will be a PlayStation 4 exclusive.

With its low price point, the headset will be entering a strong market in the PlayStation 4, as the gaming console has sold 36 millions units since its launch.

Sony Computer Entertainment CEO Andrew House said that over 230 developers are currently creating content for the PlayStation VR, and that they are expecting around 50 games to be available upon launch. 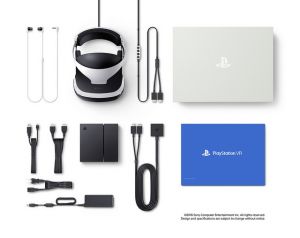 PlayStation VR developers include independent studios and big industry publishers, including Electronic Arts, Lucasfilm, and DICE who are all working together to create a Star Wars: Battlefront experience for the VR system.

PlayStation VR will also launch with 5 games made by Sony.