It turns out, nearly extreme black holes do have "hair." 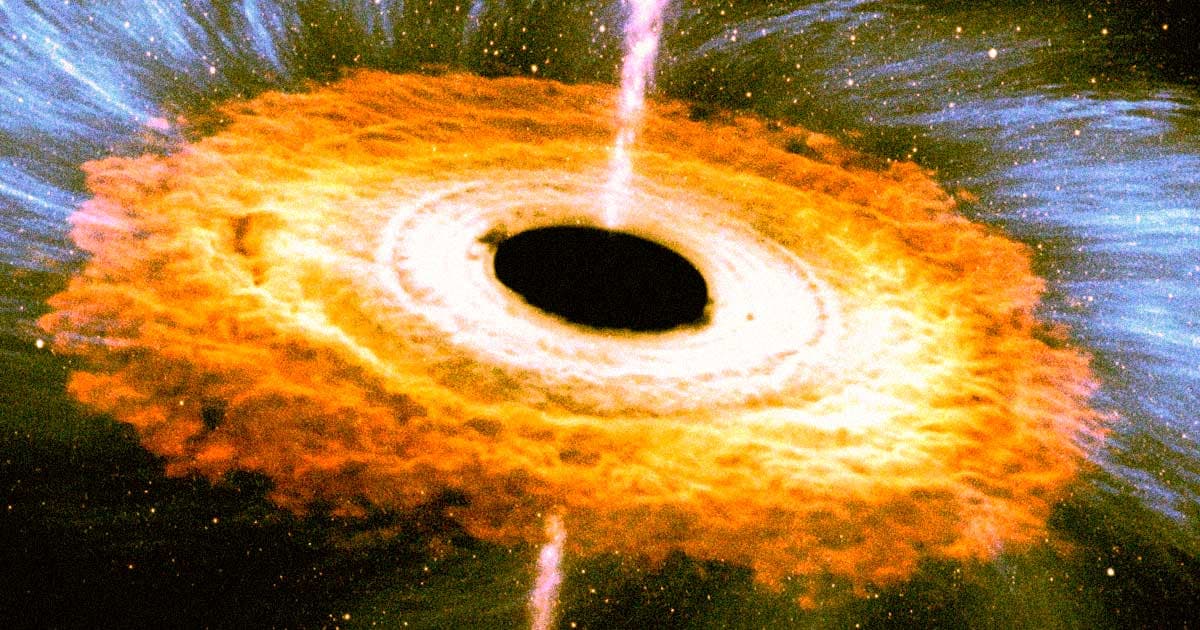 In the 1960s and '70s, physicists Jacob Bekenstein and John Wheeler did a bit of math and determined that black holes "have no hair."

That seemingly bizarre statement might have left some wondering whether the scientists were partaking in the drugs synonymous with the era, but they weren't talking about hair in the traditional, stuff-on-top-of-your-head sense.

Or, well, just let us explain.

Hair is often used to describe how a person looks — he's a blonde, she's a brunette. But Bekenstein and Wheeler determined that black holes didn't have that something scientists could use to describe their appearance.

All black holes have, according to the longstanding theory, are the three observable characteristics defined by Albert Einstein's general theory of relativity: a mass, an angular momentum, and an electric charge. The black hole's gravitational pull snatches up anything else that might be useful for differentiating one black hole from another of the same type.

In other words, the duo determined that the phenomena have "no hair" — and that makes it really hard to glean any insight into an individual black hole's history or origin.

That changed in 2018 when a team led by University of Cambridge scientists discovered that extreme black holes, ones with the maximum electric charge possible, do have several properties researchers can use to tell them apart. But all other types of black holes remained "bald" — until now.

On November 15, a team at California's Theiss Research published a paper in the journal Physical Review Research focused on the hair-growing ability of nearly extreme black holes.

"In the movie 'Interstellar' the monster black hole is nearly extreme," researcher Lior Burko said in a press release. "We wanted to see if Gargantua has hair."

But it doesn't last long.

Astrophysicists might not have to wait too long to see the "hair" on a nearly extreme black hole in real-life either.

In the early 2030s, the European Space Agency plans to launch three spacecraft as part of the Laser Interferometer Space Antenna to detect black holes' gravitational waves — and as Burko told Live Science, there's a chance the project could spot the "hair" on a nearly extreme one.

Read This Next
Falling In
Objects We Thought Were Black Holes May Actually Be Wormholes, Scientists Say
Black Hole Snapshot
Scientists Release Image of Black Hole at Center of Our Galaxy
Sucking Atmospheres
Scientists Spot Ravenous "Vampire" Star Devouring Its Neighbor
Yuge
Scientists Discover Enormous Black Hole Right Near Our Galaxy
Ripple Burst
Scientists Detect "Tsunami" of Gravitational Waves
More on Hard Science
Quacks Like a Duck
Yesterday on futurism
Those Headlines About Scientists Building a Wormhole Are Total Nonsense, People
It From Bit
Nov 22 on the byte
A Scientist Is Crowdfunding an Experiment to Check if We Live in a Simulation
Water Carrying
Nov 20 on the byte
Evidence Grows That Soggy Meteorites Gave Earth Its Oceans
READ MORE STORIES ABOUT / Hard Science
Keep up.
Subscribe to our daily newsletter to keep in touch with the subjects shaping our future.
+Social+Newsletter
TopicsAbout UsContact Us
Copyright ©, Camden Media Inc All Rights Reserved. See our User Agreement, Privacy Policy and Data Use Policy. The material on this site may not be reproduced, distributed, transmitted, cached or otherwise used, except with prior written permission of Futurism. Articles may contain affiliate links which enable us to share in the revenue of any purchases made.
Fonts by Typekit and Monotype.