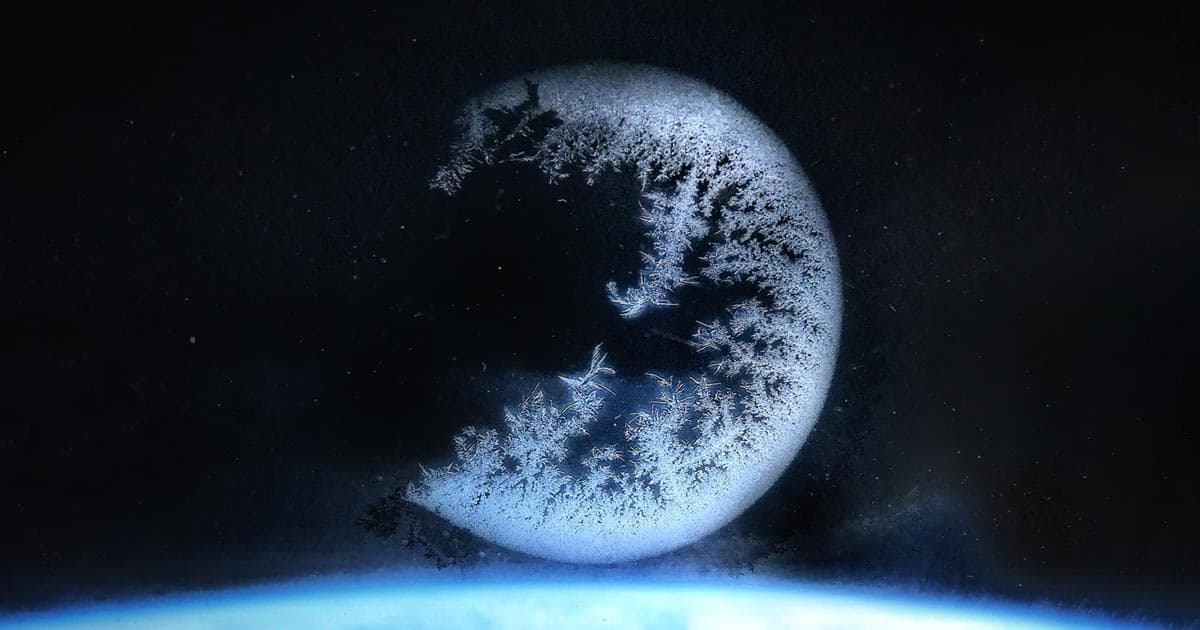 A Russian cosmonaut has shared an absolutely gorgeous photo of a Moon-shaped ice formation on the window of the International Space Station — and although we have questions, we sure do love to see it.

On Twitter and Telegram, Cosmonaut Sergei Korsakov posted photos of a circular frost pattern on the interior of a window aboard the ISS, replete with our Pale Blue Dot down below.

The photo is intriguing because Futurism couldn't find any other documentation in the photography record or academic literature about ice crystals forming on the windows of spacecraft (if you're familiar with any work on that subject, though, please drop us a line.)

Neither NASA nor the Russian space agency Roscosmos replied to questions about the formation.

One plausible hypothesis is that the phenomenon is similar to the way car windows frost over. Experts have described the ISS's windows as a "tremendous heat leak," and at least some are heated.

An astrophysicist and spacecraft expert told us he wasn't familiar with ice crystals on the interior of spacecraft, but speculated that the "water is on the interior edge of the window and was put there or condensed from the astro[naut]'s breath or something."

Korsakov seemed to imply on Telegram that the pattern persisted on the window for at least a full day.

It "looks like winter is still going on here" he quipped in Russian on May 15. The next day, he posted another photo of what appears to be the same pattern, writing that "the adventures of the frosty space pattern continue!"

"It's funny," read the translated message. "The frost has melted, but the condensation pattern remains."

More on ISS cosmonauts: Things Apparently Got Awkward During Movie Night on the Space Station

Read This Next
Duck and Roll
Russia Forced to Dodge Space Debris From When It Blew Up Satellite
Expect Delays
Scathing Report Admits NASA Is Years Behind Moon Landing Schedule
Astronaut Drip
We Just Got the First Peek at NASA's Artemis Moon Landing Suits
Moonwalk Drip
NASA Inks Deals for Moonwalking Suits for Artemis Landings
Weredata
Startup Announces Plans to Bury Server Farm on the Moon
More on Off World
Going Down
Jun 25 on the byte
Scientists Say the Sun Is Acting Up and Causing Satellites to Fall Back to Earth
Target Practice
Jun 24 on the byte
NASA Spots Location Where Derelict Rocket Smashed Into the Moon
Fly Already
Jun 24 on the byte
SpaceX Finally Lifts Super Heavy Booster Using Giant Robot Arms
READ MORE STORIES ABOUT / Off World
Keep up.
Subscribe to our daily newsletter to keep in touch with the subjects shaping our future.
+Social+Newsletter
TopicsAbout UsContact Us
Copyright ©, Camden Media Inc All Rights Reserved. See our User Agreement, Privacy Policy and Data Use Policy. The material on this site may not be reproduced, distributed, transmitted, cached or otherwise used, except with prior written permission of Futurism. Fonts by Typekit and Monotype.