These folks love living in a pod so much that they're getting neck tattoos of the pod company's logo. 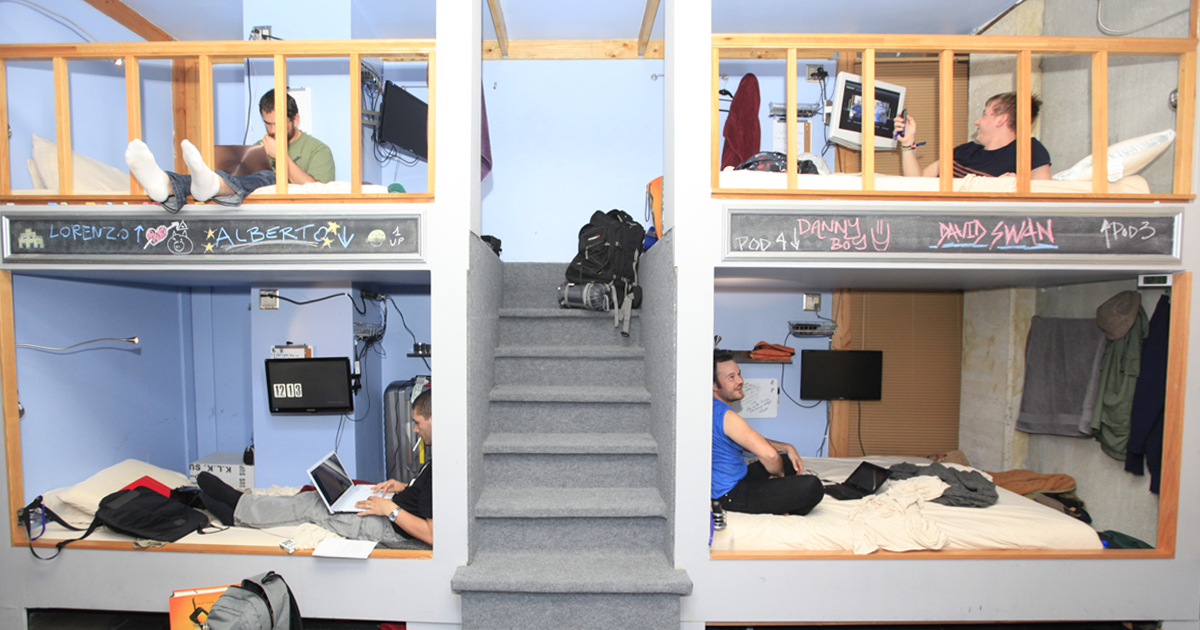 The rent is too damn high!

A recent quality of life survey by the University of California in Los Angeles found that the residents of the sprawling metropolis are becoming increasingly dissatisfied with housing affordability.

In response, thousands of young people are giving up traditional housing in favor of living in a "pod" — a hostel-like living experience that confines their sleeping quarters to a nook in a room full of similar nomads.

And their commitment to the idea is astonishing: some "podestrians," as they call themselves, are getting the logo of a local pod-housing network tattooed on their bodies — several on their necks.

"I've managed to get this PodShare tattoo," said Nat, who got a neck tattoo of the company's logo, in a video clip that identifies her as "Podestrian #3668." "It kind of represents what I came traveling for."

The Pod Life Chose Me

The idea of living in a pod shouldn't come as a shock in LA, where a simple two-bedroom can cost more than $2,000 a month — and incomes haven't kept pace.

In response, ridesharing and co-working spaces have become the norm, while house ownership and a stable full-time job are becoming increasingly elusive to young city dwellers.

A particularly illustrative example of that trend is PodShare, a Los Angeles-based "affordable shared housing" network, that allows travelers, new LA residents, and temp workers to crash on a twin-sized memory foam mattress.

Kitchen, bathroom, and living room spaces are shared with others, while WiFi, lockers, and laundry are provided on location. The price: in the neighborhood of $1,400 a month, depending on location.

"Millennials don’t own a gym at home, they buy a membership," reads its about page. "We don’t subscribe to cable television, we watch Netflix."

But it's not just a simple fix for when you're in town for the night — PodShare's "podestrians" can be incredibly dedicated to the concept of co-living.

They're so devoted, in fact, that one prominent section of the PodShare website is dedicated people who've gotten the company's logo tattooed on different parts of their bodies. In video testimonials uploaded to the PodShare's YouTube page, PodShare fanatics share how much the business means to them.

"Being in LA for me has always been a dream for me," said Daniel — otherwise known as "Podestrian #1770" — in one a testimonial from 2015. "And PodShare is totally part of it. I met friends for life, for sure."

READ MORE: The Affluent Homeless: A Sleeping Pod, A Hired Desk And A Handful Of Clothes[NPR]

More on pod living: Young People Are Choosing to Live in “Pods” Instead of Apartments

Read This Next
Futurism
Hong Kong Is Planning a $79 Billion Artificial Island
Futurism
The Future Of Sharing Means You'll Never Have To Buy Anything Ever Again
Futurism
Hexagonal Pods Attached to Buildings Could Help Solve New York's Homeless Problem
Futurism
The Internet Has Altered the Meaning of "Truth" and "Trust"
Futurism
A Harvard Engineer Invented Stackable Homes
More on Future Society
Unorthodox Urinal
Yesterday on the byte
Scientists Say They've Figured Out the Ideal Urinal for Not Splashing Back
Abso-Effing-Lutely
Yesterday on futurism
Free Speech Absolutist Elon Musk Discovers That Some Speech Is Unacceptable After All
Might See Nonsense
Yesterday on futurism
MSN Fired Its Human Journalists and Replaced Them With AI That Started Publishing Fake News About Mermaids and Bigfoot
READ MORE STORIES ABOUT / Future Society
Keep up.
Subscribe to our daily newsletter to keep in touch with the subjects shaping our future.
+Social+Newsletter
TopicsAbout UsContact Us
Copyright ©, Camden Media Inc All Rights Reserved. See our User Agreement, Privacy Policy and Data Use Policy. The material on this site may not be reproduced, distributed, transmitted, cached or otherwise used, except with prior written permission of Futurism. Articles may contain affiliate links which enable us to share in the revenue of any purchases made.
Fonts by Typekit and Monotype.