Yes, We Might Still Meet the Paris Climate Agreement’s Goals

The numbers are stacking up in our favor.

It’s rare to hear good news related to climate change, but for the third year in a row, carbon emissions stabilized in 2016. This finding, announced in September by the EU Joint Research Center and the Netherlands Environmental Assessment Agency, doesn’t mean that the amount of greenhouse gases in the atmosphere has yet decreased, but it could mean that we may be able to meet the goals of the Paris Climate Agreement in slowing global warming.

The Paris Agreement, established in October of 2016, pledges that countries will limit global temperatures to two degrees Celsius above pre-industrial levels, with an aim to keep that that rise below 1.5 degree Celsius. To accomplish this, The Guardian estimates that global carbon pollution will need to peak by 2020. And if international powers continue on their current course, this may be possible.

China has been at the forefront of this recent emissions plateau. The country shut down 40 percent of its factories in order to curb carbon emissions, has committed to converting all of its cars to electric, and is even building carbon-capturing plants. With a population four times that of the United States, China is now the largest net carbon polluter—yet the country has pushed forward against climate change and flattened their emissions since 2013. 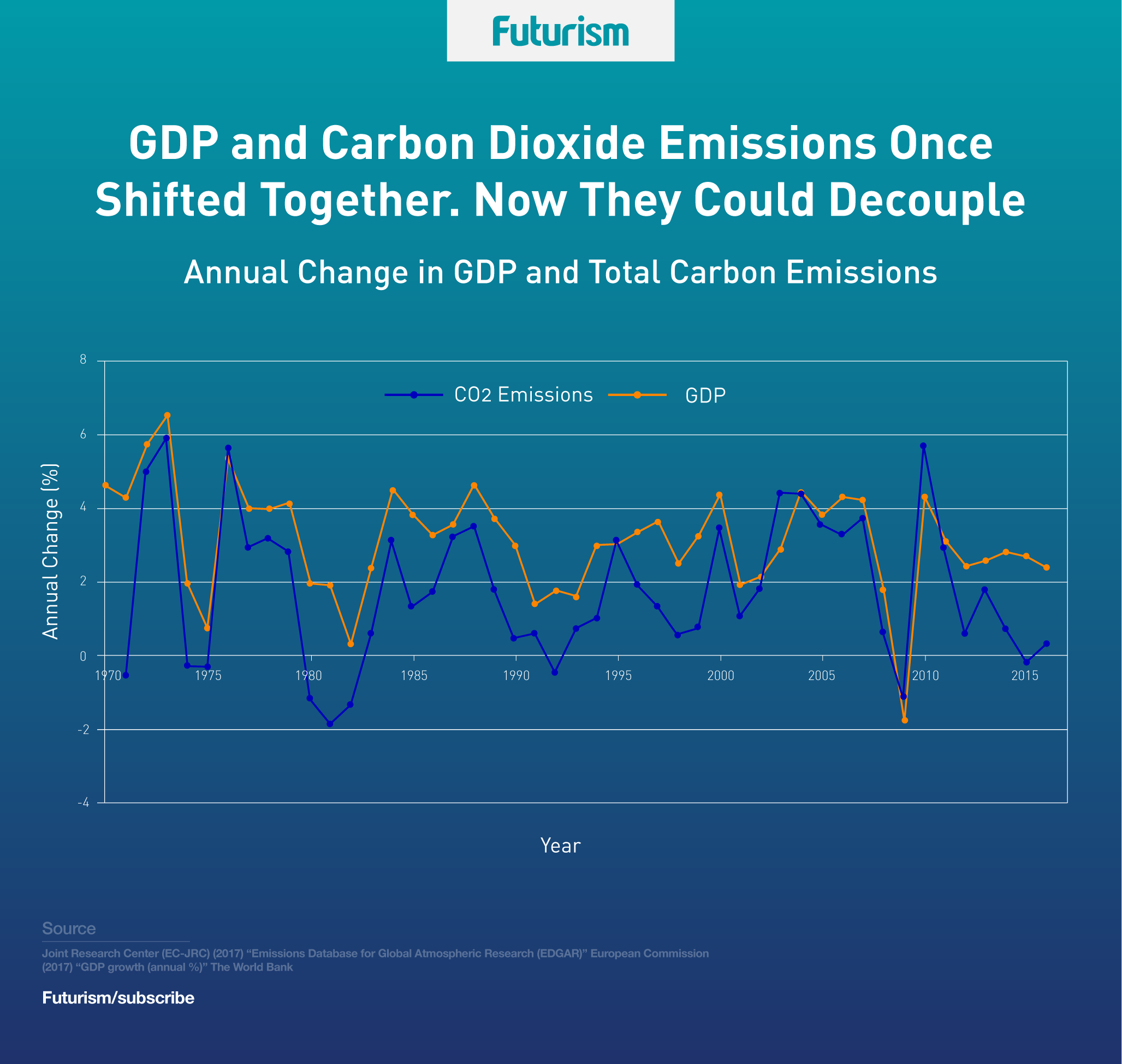 China’s efforts to cut their carbon emissions have been heavily responsible for the remarkable “decoupling” of emissions from economic growth—a relationship where, as the global economy grows, global carbon emissions do not grow with it.

Here in the U.S., we’ve also made some progress in decoupling emissions; between 2000 and 2014, US carbon emissions fell by 6 percent, while the GDP grew 28 percent. In April 2016, the World Resources Institute reported that the implementation of the Clean Power Plan in the U.S. would reduce emissions by another 6 percent between 2020-2025, alongside an overall GDP increase of 13 percent. However, despite all of this progress, recent policy actions have set the country somewhat adrift.

EPA head Scott Pruitt, following through on President Trump’s campaign promises to restore the coal and fossil fuel industries, has begun the process of repealing the Clean Power Plan. He also plans to prop up the coal industry with taxpayer-funded subsidies, despite the fact that coal plants are more expensive to build.

However, not all hope is lost for the US—and for meeting the goals of the Paris Agreement—yet. Several states and cities have vowed to uphold the Paris Agreement despite the opposing national stance. And, of course, the global decoupling trend also shoots down the persistent myth that swapping to clean energy is bad for a nation’s economy. With many renewable sources of power, like wind, now cheaper than fossil fuels, it has become clear that preventing global climate change is green in all definitions of the word.