Now You Can Experiment With OpenAI's "Dangerous" Fake News AI

OpenAI said the AI was too dangerous. Now it can plan your afternoon. 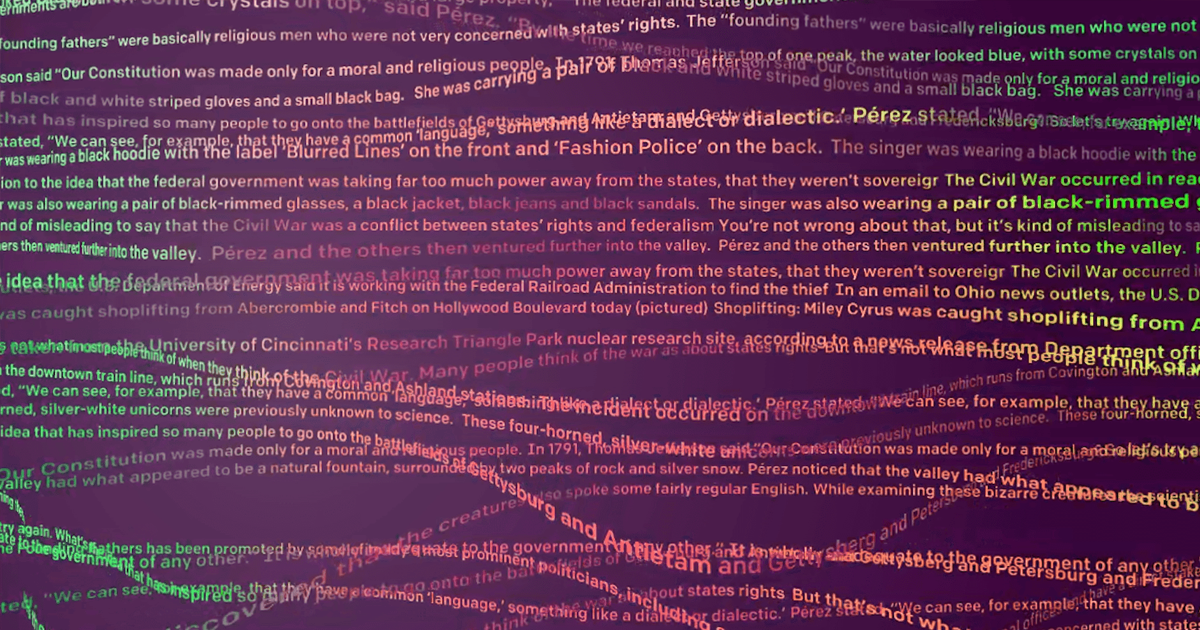 When OpenAI, the AI research organization founded by Elon Musk, created a text-generating AI system called GPT-2, the group said it was too dangerous to be released lest it be used to create propaganda or fake news.

Now, thanks to a website called "TalkToTransformer.com," you can use a watered-down version of the algorithm to write your to-do list, draft a new screenplay, or write rambling essays based on a prompt. The results aren't perfect, but by making the algorithm publicly accessible, people could get a better understanding of what advanced AI is capable of and where it falters.

The stories that the algorithm tells are often incoherent, introducing and forgetting characters, props, and setting willy-nilly, reports The Verge after kicking the tires.

For example, when prompted with sample dialogue among characters from "The Avengers," TalkToTransformer churned out a bizarre scene where "Tony," "Steve," and Thor fumbled over a door handle before Tony asked Steve if he's "Tony the Iron Man." Not exactly the most compelling addition to the Marvel Cinematic Universe.

When prompted with "Futurism.com, best-known for," the algorithm instead wrote a blurb for a book written by a "Mr. Wunderlich."

We had some fun with the algorithm, but the real question is over whether the system could be dangerous or misleading. Based on our tests, almost every single result was clearly written by a computer that doesn't quite grasp how language works — fake news-writing AI may be on the horizon, but it isn't here yet.

Read This Next
DAN vs ChatGPT
Devious Hack Unlocks Deranged Alter Ego of ChatGPT
Naughty Botty
Amazing "Jailbreak" Bypasses ChatGPT's Ethics Safeguards
Immortality Lite
Metaverse CEO Says ChatGPT Is Speeding Up Timeline for Emulating Dead People
Let Them Fight
Whatever You Think of BuzzFeed's AI Quizzes, They're Way Less Horrible Than What CNET Has Been Doing
Bot Wreck
Red Ventures Knew Its AI Lied and Plagiarized, Deployed It at CNET Anyway
More on Artificial Intelligence
Making Waves
Yesterday on the byte
Alien-Detecting AI Finds Eight "Suspicious" Signals
Big Fish
Yesterday on the byte
Getty Images Sues AI Art Generator Stable Diffusion for Copying Millions of Its Photos
No AI GF
Yesterday on the byte
Italy Strikes Crushing Blow to AI-Powered Girlfriend
READ MORE STORIES ABOUT / Artificial Intelligence
Keep up.
Subscribe to our daily newsletter to keep in touch with the subjects shaping our future.
+Social+Newsletter
TopicsAbout UsContact Us
Copyright ©, Camden Media Inc All Rights Reserved. See our User Agreement, Privacy Policy and Data Use Policy. The material on this site may not be reproduced, distributed, transmitted, cached or otherwise used, except with prior written permission of Futurism. Articles may contain affiliate links which enable us to share in the revenue of any purchases made.
Fonts by Typekit and Monotype.