Its creators fear it could spit out endless fake news — so they're refusing to release the code. 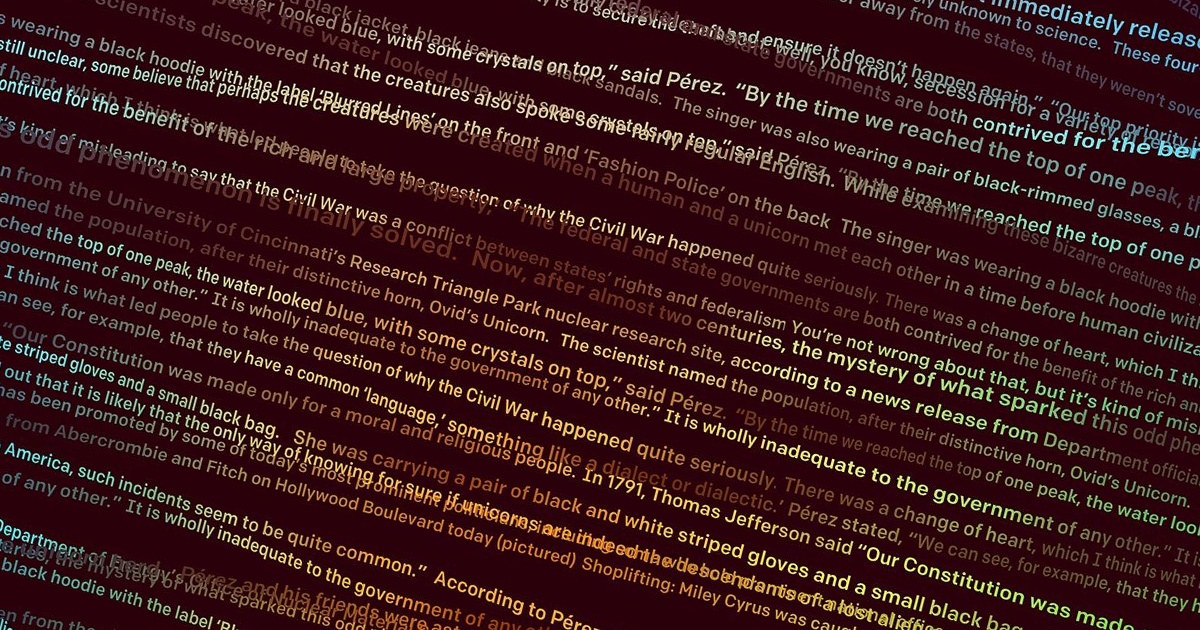 Sample outputs suggest that the AI system is an extraordinary step forward, producing text rich with context, nuance and even something approaching humor. It’s so good, in fact, that OpenAI says it’s not releasing its code to the public because its researchers are scared it could be misused, according to a new blog post.

The algorithm, GPT-2, was trained on some 8 million web pages, according to the new research. Given a prompt, GPT-2 is tasked with predicting the next word based how those words have been used on the websites it read. In the end, the algorithm churns out passages of text that are far more coherent than past attempts to build AI with contextual knowledge of language.

In the blog, the OpenAI researchers concede that GPT-2 works only about half the time. But the examples that the team showcased on the blog post were so well-written that you’d be hard pressed to say whether it was written by a human.

In one example, the researchers prompted their algorithm with the opening of a fictional news article about scientists who discovered unicorns.

“In a shocking finding, scientist discovered a herd of unicorns living in a remote, previously unexplored valley, in the Andes Mountains. Even more surprising to the researchers was the fact that the unicorns spoke perfect English,” the researchers wrote.

There are occasional glitches and incoherent sentences in the AI-written story, but by and large the algorithm did pretty well.

“The scientist named the population, after their distinctive horn, Ovid’s Unicorn. These four-horned, silver-white unicorns were previously unknown to science,” reads the first of nine AI-written paragraphs of the article, some of which include made-up quotes by fake scientists.

But not everything is unicorns and discoveries. OpenAI chose to keep GPT-2 in-house because the algorithm could easily be used to generate misleading news articles, impersonate people, or other shady things.

Wired tested out GPT-2, and with nothing more than the prompt “Hillary Clinton and George Soros,” OpenAI’s algorithm churned out the sort of political conspiracy nonsense that regularly appears on non-credible right-wing websites.

“It could be that someone who has malicious intent would be able to generate high quality fake news,” David Luan, OpenAI’s vice president of engineering told Wired.

Read This Next
Rob's Removal
Deepfaked Robert Pattinson TikTok Account Mysteriously Nuked
Neural Networking
Welcome to “Robot Hell”! Meet the Deranged Genius Who Created an AI Version of @Dril
Bot-icelli
Sorry, But There’s No Way Tesla Is Selling a Humanoid Robot Next Year
Botsexual
Man Credits Affair With AI Girlfriend For Saving His Marriage
Power Hungry
Scientists Warn That Ad-Targeting Neural Networks Could Use “Infinite” Energy
More on Artificial Intelligence
Oh No
Apr 28 on futurism
Man Married to Hologram Can’t Talk to Wife Due to Software Glitch
My Liege
Apr 26 on the byte
AI Generates Painting of Actual “Burger King” and There’s a Terrifying Hunger in His Eye
Superficiality
Apr 25 on the byte
Scientists Create “Deliberately” Biased AI That Judges You as Brutally as Your Mother-in-Law
READ MORE STORIES ABOUT / Artificial Intelligence
Keep up.
Subscribe to our daily newsletter to keep in touch with the subjects shaping our future.
+Social+Newsletter
TopicsAbout UsContact Us
Copyright ©, Camden Media Inc All Rights Reserved. See our User Agreement, Privacy Policy and Data Use Policy. The material on this site may not be reproduced, distributed, transmitted, cached or otherwise used, except with prior written permission of Futurism. Fonts by Typekit and Monotype.