The RESTRUCTURE project, which officially ended in January, conducted the experiments on a small-scale at the Jülich Solar Tower (STJ), Germany. Although the storage capacity was relatively low, this was the first time that such a concept was validated under near-realistic conditions for thermochemical heat storage applications.

“The novelty of the [RESTRUCTURE] reactor design relates to the use of a monolithic honeycomb ceramic structure as its building block, in which the active material can be incorporated via several ways,” explains project coordinator Dr. George Karagiannakis. “This structure is very similar to the ceramic ‘bricks’ used in the catalyst converters in motor vehicles.”

The redox (reduction-oxidation reaction) schemes investigated in the RESTRUCTURE project require maximum temperatures of around 1000 degrees to be able to operate, and such high temperatures are currently not available in existing commercial CSP (concentrating solar power) plants.

With a storage power capacity of about 25 kW, the system was fed by a side-stream of the hot air produced by the solar receiver at the STJ test site. During discharge, colder air passed through the charged monolithic assembly and heat produced was dissipated from this flow, thereby increasing its temperature at the reactor/heat exchanger outlet.

In this way, part of the energy contained in the air flow is stored in the honeycombs and the flow exits the system at a lower temperature, but still sufficiently high to drive a power cycle and produce electricity.

When energy from the sun is not available, the air flow temperature drops substantially, but when forced to pass through the storage system a heat-release reaction is triggered, thereby increasing the temperature of the air, which is again used to operate the power cycle.

The team faced many challenges when trying to develop the full-scale redox honeycombs, which were made from materials that are metal-oxide based. Some examples include achieving a good compromise between structural stability under operating conditions and redox performance, and scaling-up production strategies which were initially developed at a laboratory scale.

The team was proactive, though, and had fall-back options in reserve.

Throughout the duration of the project, extensive tests were first performed to identify and validate whether the honeycomb formation was indeed the most efficient. The honeycomb structure works well for reasons related to “the simpler reactor design that they can offer and the inherent modularity of such a system.”

“Of crucial importance, issues such as special measures to prevent high temperature drop build-up during operation, material recirculation, and extra safety measures associated with efficient particles containment in the system must be considered when ‘conventional’ powder/small particles in fixed or moving reactor designs are targeted,” elaborated Dr. Karagiannakis.

“This may increase system complexity considerably and consequently decrease overall efficiency. However, none of these issues are of particular concern when honeycomb reactor designs are considered.” 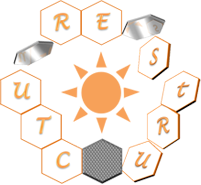 Dr. Karagiannakis emphasizes that the approach taken in RESTRUCTURE is considered as “next generational.”  The technology’s future commercialization depends strongly on the development of the next generation of high temperature/high-efficiency CSP technologies. While this is currently in progress, it isn’t within the scope of Karagiannakis’ project.

“We are intensively seeking ways of continuing our research efforts and further developing the technology,” Dr. Karagiannakis confirms. “In particular, scaling-up and optimization strategies are at the core of our targeted next steps.”


While more needs to be done, by demonstrating its novel honeycomb design for a reactor/heat exchanger, the project has tackled that first step of proving that a new method of thermochemical heat storage is feasible.

Researchers are hoping for the opportunity to work on a follow-up project, whose aim is to elaborate on the RESTRUCTURE results and, hopefully, pave the way for eventual commercial applications of this new technology.

The First Quarter of 2016 Was The Hottest Ever Recorded