This Clean Energy Drink Relies on Powerful Nootropics, Not Sugar and Caffeine

The company even offers free cognitive assessment tools you can use to track your mental performance. 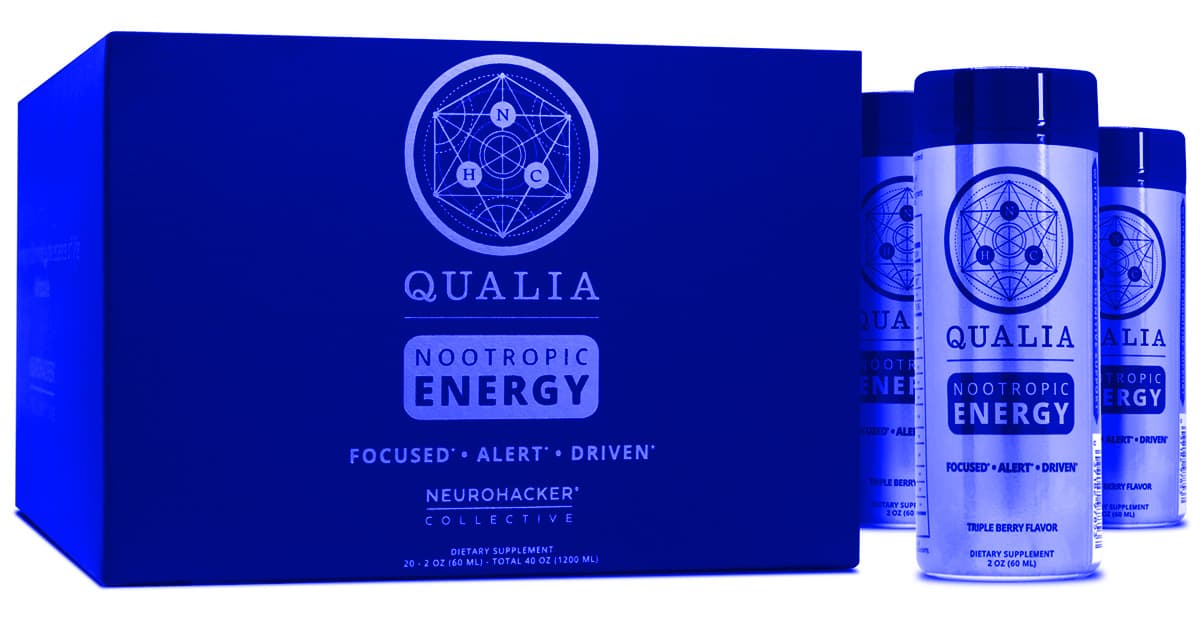 It's no secret that energy drinks are a big business. Driven by an intense demand from consumers looking to gain a physical and mental edge, the industry is expected to be worth over $86 billion by 2026. That said, just because something is popular doesn't mean it is good. Many, if not most, energy drinks and shots are less than healthy, containing from 200 to 400 milligrams of caffeine and 30 to 50 grams of sugar per serving. Yes, this type of drink will perk you up, but they will also set you up for a major crash. And they don’t improve your brain’s overall performance. Luckily, Neurohacker Collective, one of the most respected names in the nootropics industry, is about to change that. They’ve taken the scientifically proven brain-boosting formula used in their popular nootropic supplements and repurposed it to create Qualia Nootropic Energy, the world’s first true smart drink.

Each two-ounce Qualia Nootropic Energy shot contains nine researched-backed nootropics along with three additional ingredients that promote overall health. As a result, they provide clean lasting energy and help promote increased focus and motivation. And unlike other energy drinks, Qualia Nootropic Energy shots contain just four grams of sugar, and the same amount of caffeine found in a small coffee.

Here's a closer look at what you'll find in each Qualia Nootropic Energy shot.

Saffron is a spice derived from the Crocus sativus plant, and has been used for at least 4,000 years. A multitude of health benefits are attributed to saffron, and some evidence suggests it may improve mood and protect against cognitive impairment, while also promoting focus and attention.

Known as “intellect plant,” celastrus paniculatus is a climbing shrub found throughout the Himalayan highlands of northern India. Known for its nootropic and neuroprotective effect, the herb has been used in ayurvedic medicine for thousands of years. Some studies suggest it has ability to increase the number of lipids and phospholipids in the brain, reduce depression, and even protect neurons against glutamate-induced toxicity.

Commonly found it in green tea, L-theanine is an amino acid analog of glutamate and glutamine derived from the Camellia Sinensis plant. Studies suggest that L-theanine increases alpha brain waves, which promotes attention and relaxation without sedation. It is also thought to modulate the release of dopamine to help improve mood.

Better known as alpha GPC, Alpha-glycerophosphocholine is a compound of choline and glycerophosphate that's been shown to increase neural membrane integrity. Due to its strong neuroprotective effects, it is thought to help increasing choline levels in the brain.

Coffeeberry is derived from an organic coffee cherries, which is the fruit surrounding the hard seed or “bean” from which coffee is made. Coffee cherries are high in polyphenols, and like coffee beans, they also contain caffeine. Many studies indicate coffeeberry’s role in supporting cognitive performance, executive function, task switching, information processing, reasoning, and creative thinking.

N-Acetyl-L-Tyrosine is known for a number of nootropic effects, including increased attention, motivation, concentration, memory, and learning. Studies indicate that this acetylated form of the amino acid L-Tyrosine has a has the ability to increase the synthesis of noradrenaline from dopamine and balance levels of serotonin and GABA. It may also increase the bioavailability of tyrosine which can reduce the effects of environmental stress.

Commonly known as American ginseng, Panax quinquefolius is a plant native to forested regions of North America. The ginseng extract known as Cereboost has been clinically studied on humans, and may enhance working memory and attention while promoting calmness. It is also thought by some to support learning and working memory, and has been shown to support neurogenesis and as well as neuroprotective effects.

Curious About Nootropics? Try Qualia’s New Smart Drink For Yourself.

Qualia Nootropic Energy has a triple berry flavor, and each shot comes in two-ounce serving packet. And right now, if you try Qualia Nootropic Energy by clicking HERE, you can get an additional 15-percent off your initial purchase by using the coupon code PROD15 at checkout. Best of all, Neurohacker Collective offers a full 100-day money-back guarantee. So if you don’t notice a marked improvement in your mental performance, you can get your money back. The company even offers free cognitive assessment tools that you can use to track your mental performance and see the results of their specialized nootropics blend for yourself.

So if you're in search of an energy drink that works, stop flooding your brain with sugar and caffeine, and try Neurohacker Collective’s Qualia Nootropics Energy smart drink, today.

Read This Next
Brands We Love
This Revolutionary Supplement Was Designed to Reduce the Side Effects of Adderall
Brands We Love
Are Stress and Exhaustion Affecting Your Productivity? Nootropics Might Be the Answer.
Brands We Love
This Revolutionary Smart Drink Can Help You Reach Peak Mental Performance
Brands We Love
These Specialty CBD Shots Provide a Productive Day's Work and a Productive Night's Sleep
Brands We Love
This Brain Boosting Nootropic Smart Drink Is Based On Science, Not Sugar
More on Hard Science
Warped Tour
Thursday on futurism
Professor Believes Door to Warp Drive May Lie With Ethylene Glycol
Sky Bursts
Thursday on the byte
Astronomers Intrigued by 25 Mysterious Repeating Radio Signals From Deep Space
Tractor Beam
Jan 26 on the byte
Scientists Build Working Tractor Beam, Although It's Comically Tiny
READ MORE STORIES ABOUT / Hard Science
Keep up.
Subscribe to our daily newsletter to keep in touch with the subjects shaping our future.
+Social+Newsletter
TopicsAbout UsContact Us
Copyright ©, Camden Media Inc All Rights Reserved. See our User Agreement, Privacy Policy and Data Use Policy. The material on this site may not be reproduced, distributed, transmitted, cached or otherwise used, except with prior written permission of Futurism. Articles may contain affiliate links which enable us to share in the revenue of any purchases made.
Fonts by Typekit and Monotype.