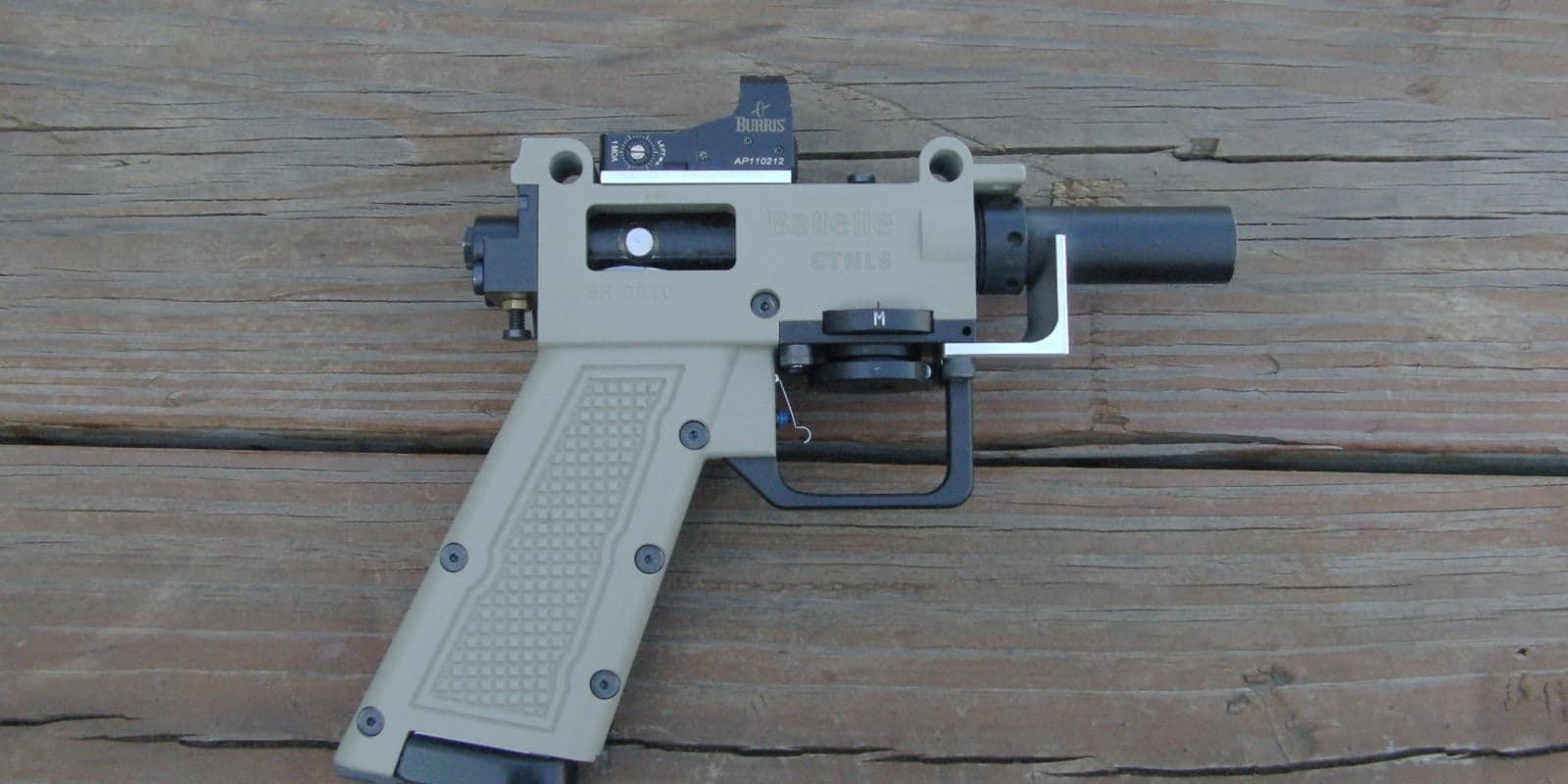 A non-lethal weapon that can still stop an attacker in their tracks has been developed. It's called the Caseless Telescoping Less-lethal System. As the name implies, the compact, lightweight weapon can fire at someone standing a few hundred meters away without harming them. The design comes from Jeffrey Widder, senior research scientists at Battelle Memorial Institute in Ohio.

Calling it the Pogo Stick Jet Gun probably didn't fly with the marketing team, but the title would make sense. Instead, the weapon is affectionately nicknamed "the Pogojet"— a combination of the words "pogo stick" and "jet."

It's called that because, obviously, the action resembles a pogo stick. The propellant burns inside the round, pushing on a piston that propels it forward. Once the piston reaches its full extent, the exhaust gases can be vented sideways, so the round continues forward at the same speed, or they can be directed through holes in the base of the round like rocket exhaust to give as much extra "kick" as required. That's where the "jet" part comes from.

According to Widder, being shot with the Pogojet is, "like a bee sting. It's only over a small area, but its intense enough to be effective."

Focusing the effect on a small area is unique to the Pogojet. Typically, non-lethal rounds, such as rubber bullets, are big, soft, and slow. Their low velocity gives them a shorter range, meaning whoever is firing needs to be in the middle of the action, which (as you may have guessed) can be a dangerous place.

The designers on Widder's team were challenged with creating a round that travels slowly enough to be safe at point blank range, but is still able to hit a target father away. Widder was able to vary the muzzle velocity depending on the distance to the target so that the projectile always hits between 77 and 87 meters per second.

Unlike other less-lethals, the Pogojet can be fired as rapidly as needed. Another difference lies in the way the weapon is aimed. Shooters are trained to aim lethal rounds at the target's center of mass. The Pogojet is fired the same way. In contrast, other non-lethal rounds are aimed at the thighs or buttocks.

With the issue of non-lethals, such as rubber bullets, being such a current topic in the media, Widder was sure to point out that a high level of fire discipline is always needed.

"The greatest risk of severe injury or death occurs from impacts to the head, face, or neck of the intended target or a bystander, " Widder says. "The use of more accurate weapons with disciplined fire can substantially reduce the likelihood of this unintended consequence."

The Pogojet is still being developed. Widder and his team plan to replace any metal components with plastic, build a rangefinder interface, and the semi-automatic mechanism. Before marketing the weapon, it'll go through a series of Human Effects Testing to make sure it's really safe and effective.

Read This Next
From Our Partners
Learn How Startups Are Launched, Funded, And Grow With This Training
From Our Partners
Launching A New Website? Get A Short, Memorable Domain Name With .TECH
Futurism
Boost Your IT Career With This CompTIA Certification Training
Brands We Love
If You're Looking For TV That Isn't Dumbed Down, Try Curiosity Stream
Dangerous Drive
This Dude Is Selling a Virus-Infested Laptop For $1.2 Million
More on Sci-Fi Visions
What is Happening
Yesterday on the byte
Elon Musk Sets His Twitter Account to Private
From the Dept. of...
Monday on futurism
The Best Humidifiers of 2023
Human v. Giraffe
Jan 24 on the byte
Chaotic Italian Fashion Line Baffles Facial Recognition Software
READ MORE STORIES ABOUT / Sci-Fi Visions
Keep up.
Subscribe to our daily newsletter to keep in touch with the subjects shaping our future.
+Social+Newsletter
TopicsAbout UsContact Us
Copyright ©, Camden Media Inc All Rights Reserved. See our User Agreement, Privacy Policy and Data Use Policy. The material on this site may not be reproduced, distributed, transmitted, cached or otherwise used, except with prior written permission of Futurism. Articles may contain affiliate links which enable us to share in the revenue of any purchases made.
Fonts by Typekit and Monotype.