Even more work meetings, but this time with giant goggles strapped to your face. 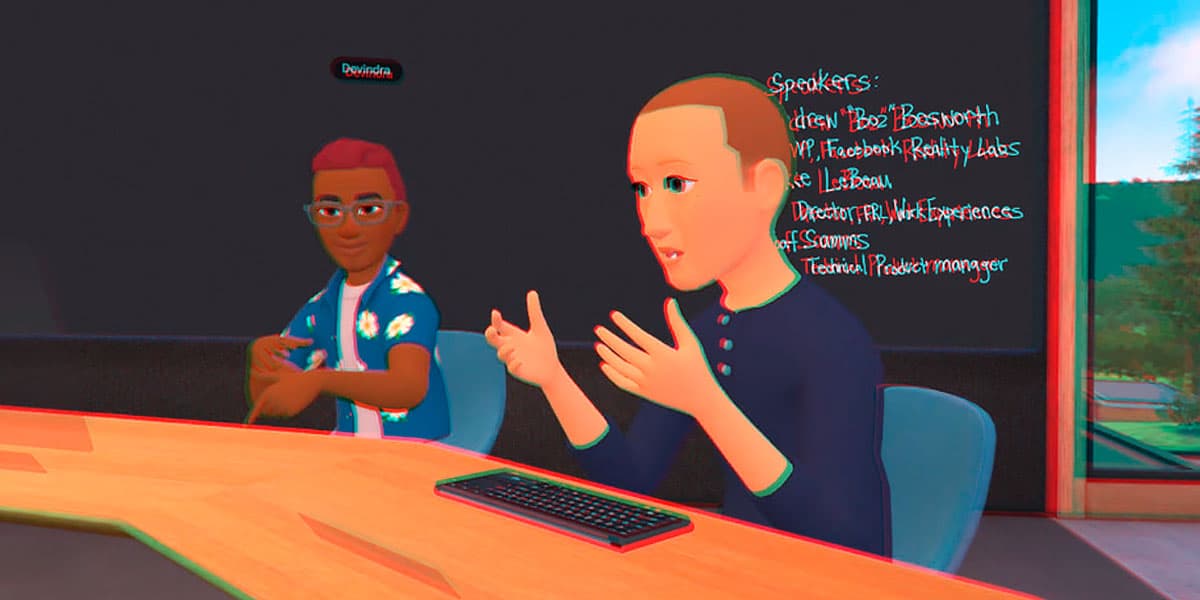 Facebook has hit the nail on the head on the exact thing — that absolutely nobody ever asked for.

Instead of meaningfully tackling the rampant, dangerous misinformation being spread on its platform and revolutionizing the way data is shared, the company released a brand new virtual reality feature called Horizon Workrooms.

The software suite, designed to work with the company's own Oculus Quest 2 headset, is the culmination of Facebook's apocalyptic vision of being forced to attend more work meetings, not while enjoying physical company — something we could all certainly use more of — but inside a VR playground that looks like it was yanked straight out of a Saturday morning children's cartoon, an eyebrow-less Mark Zuckerberg waving his arms around like a demented marionette and all.

And this thing you absolutely don't want doesn't even work very well. "After spending an hour in a Horizon Workrooms demo, it's clear that Facebook still has plenty of work left to do," Engadget wrote in a review of an early demo published today. "There were a few connection issues, avatar glitches and at one point I got booted out entirely."

The Verge's Alex Heath also pointed out in his early review that he "can see its potential as a more immersive way to communicate with people who are physically apart," but he doesn't "see it catching on beyond the most diehard VR enthusiasts anytime soon."

Instead of staring at cutouts of people's bored faces over Zoom, Workrooms Horizon allows up to 16 people to join the same meeting while wearing a VR headset. An additional 34 people can join via video call.

The Oculus Quest can track both the user's face and hands. The app even includes a virtual keyboard underneath the screen for typing.

The result, at least in its current form, is that you will be spending the entire work meeting staring at the largely lifeless renders of your colleagues. Early screen captures show avatar Zuckerberg unnaturally waving his arms and hands around, while his head seems to only vaguely be attached to the rest of his body.

To be clear, this is Zuckerberg's biggest passion project. In April, the billionaire tweeted that he was "so excited about what you’re working on that you forget to eat meals."

"Keeps happening," he added. "I think I’ve lost 10 pounds in the last month from this, but our new products are going to be [fire emoji]."

While it's unclear he was directly referring to Facebook's Horizon platform, the CEO uploaded a video of himself customizing his own adorable Oculus Quest avatar the next day — perhaps a sign of his increasing disconnect with non-virtual reality. Like the world where people are sick of attending meetings at their computers.

It's an underwhelming and arguably depressing vision of the future of the workplace. Sure, staring at people's disconnected faces over Zoom for hours on end is just as soul-crushing, but is this really how we'll spend time working remotely, together in the future?

For obvious reasons, Facebook is trying to compete in the remote work sector, and get in on some of the money companies like Zoom, Cisco, Peloton, and others pandemic-boom businesses that managed to blossom in a financially precarious and weird time in this world. But having sweaty VR goggles strapped to our heads while we watch our bosses frantically wave their cartoon arms around doesn't exactly sound like the future, let alone, that much better of an option for working from home.

Of course Mark Zuckerberg forgot to eat while he was making it — the guy has spent so much time working within virtual spaces at the top of the world, he's lost sight of the fact that out here, in the real world, most of us would simply prefer to log off.

Read This Next
Notaverse
In Extremely Confusing Twist, Facebook Says It Isn't Building a Metaverse After All
Facebook Needs to be Stopped
Facebook Admits It Doesn't Know What It Does With Your Private Data
Tyrannosaurus Exec
Mark Zuckerberg Says That When Employees Call Him the "Eye of Sauron," It's Actually a Compliment
Metaverse Monster
Facebook Exec Caught Allegedly Trying to Meet 13-Year-Old in Hotel Room
Foo Fail
Fans Say the Foo Fighters' Metaverse Concert Was A Total Disaster
More on Future Society
Hey Elli
Yesterday on the byte
New York State Buys Robots for Lonely Elders
Not-See Stuff
Yesterday on the byte
Googling "Desk Ornament" Returns Images of Nazi Paraphernalia
Angry Zuck
Yesterday on the byte
Angry Zuckerberg Complains About Employees Who "Shouldn't Be Here"
READ MORE STORIES ABOUT / Future Society
Keep up.
Subscribe to our daily newsletter to keep in touch with the subjects shaping our future.
+Social+Newsletter
TopicsAbout UsContact Us
Copyright ©, Camden Media Inc All Rights Reserved. See our User Agreement, Privacy Policy and Data Use Policy. The material on this site may not be reproduced, distributed, transmitted, cached or otherwise used, except with prior written permission of Futurism. Fonts by Typekit and Monotype.