Nike Buys NFT Company that Made the Elon Musk "Cybersneaker"

Have the hypebeasts finally gone too far? 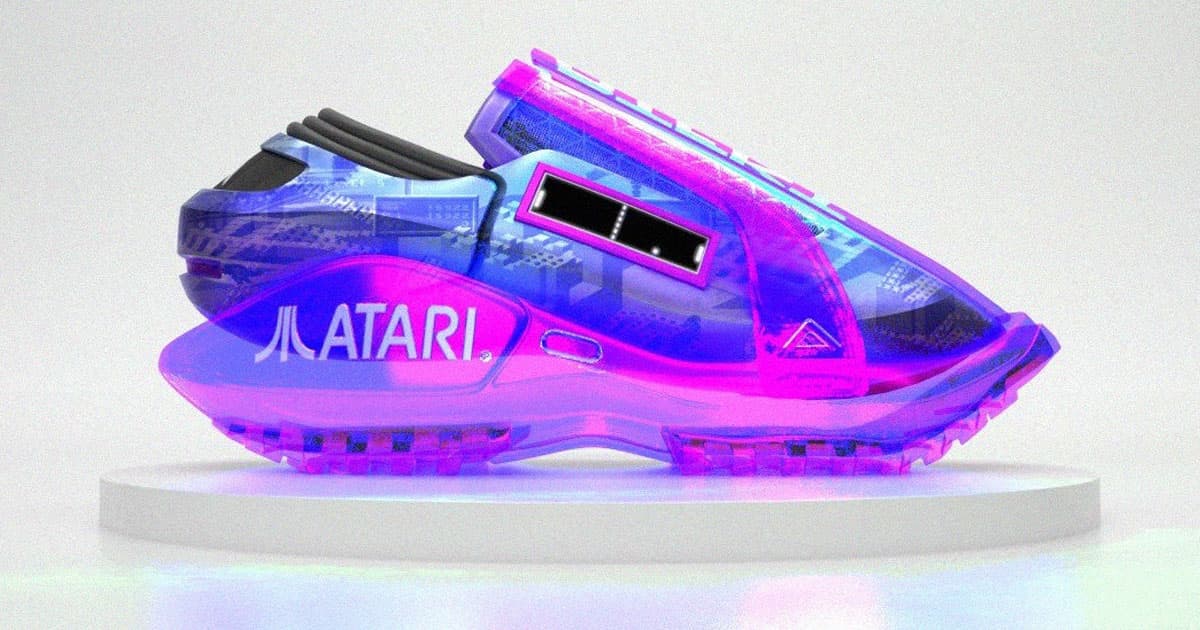 A sneaker company known for photoshopping a "cybershoe" onto Elon Musk has been purchased by Nike — in yet another sign, arguably, that the relationship between the physical and digital worlds is changing forever.

As The Verge reports, Nike has acquired the sneaker company RTFKT (which is supposedly pronounced like "artifact," though it's more fun to say "ratfucked") for an undisclosed sum, with the intent of... selling shoes in the freakin' Metaverse.

Founded in early 2020, RTFKT makes "one of a kind sneakers and digital artifacts." Its business model is as blockchain-brained as possible — physical shoes and other items can only be bought after a customer purchases an NFT of said item and redeems it during "forging" events at which buyers can claim their purchases.

The ultimate idea, as The Verge notes, is for buyers to be able to "wear" their purchases in the Metaverse — just as soon as the Metaverse is up and running for the public, and also equipped to read blockchains and load NFTs in users' accounts, at least. And, to be fair, none of that is a sure thing.

In a tweet announcing the acquisition, RTFKT co-founder Steven Vasilev — who goes by Zaptio online — said that he and his fellow cofounders Benoit Pagotto and Chris Le were "inspired by" Nike. One look at their logo, which resembles a more angular version of Nike's classic swoop design, and it's pretty easy to see the similarities.

Though it's less than two years old, RTFKT made waves when an edited photo of Tesla and SpaceX CEO Elon Musk wearing its "Cybersneaker" went viral.

Musk wasn't actually wearing the uncomfortable-looking "metal" sneakers in that viral photo — though it does appear the company ended up 3D-printing him a pair later on — but that didn't seem to matter to RTFKT, investors, or the CEO himself, who reposted the edited photos of him and now-ex Grimes at the 2019 Met Gala in the virtual dunks on Reddit. RTFKT minted the shoes as an NFT and the rest, as they say, is history.

RTFKT has sought to suggest another Musk connection, as well. On its website, the company denied "rumours around a rogue AI (stolen from the SpaceX) used by RTFKT to create next generation designs," calling them "completely false" and saying there "has been absolutely no evidence or legal action to justify these rumours."

With this Nike acquisition coming just a few weeks after Adidas announced that it had "aped" into the Bored Ape Yacht Club NFT community by purchasing one of the expensive computer-generated artworks with designs on Metaverse collaborations, it seems that real-life fashion brands are increasingly staking their claim on the high-end digital consumption potential the Metaverse provides.

And the fact that the Metaverse only exists in bits and pieces at present doesn't seem to be slowing down their enthusiasm at all.

READ MORE: Nike just bought a virtual shoe company that makes NFTs and sneakers ‘for the metaverse’ [The Verge]

More on the Metaverse: Keanu Reeves Says He'd Be Cool With Fans Having Sex With Him in VR

Read This Next
Virtual Murder
UAE Official Says Murder Should Be Illegal in the Metaverse
Notaverse
In Extremely Confusing Twist, Facebook Says It Isn't Building a Metaverse After All
Tyrannosaurus Exec
Mark Zuckerberg Says That When Employees Call Him the "Eye of Sauron," It's Actually a Compliment
Apes Ahoy
A Major NFT Project Is Falling Apart in a Storm of Lawsuits
Rube Goldbergian
The Dune NFT Project Is Back With an Inscrutable New Scheme
More on Future Society
Gone Guy
Yesterday on the byte
Man Who Accidentally Got Paid 330x His Salary Quits, Disappears
Wipe It
Yesterday on the byte
Google Says It Will Automatically Delete Abortion Clinic Visits From Users' History
Vatican Vagrant
Jul 2 on the byte
Elon Musk Takes Flabbergastingly Awkwardly Picture With the Pope
READ MORE STORIES ABOUT / Future Society
Keep up.
Subscribe to our daily newsletter to keep in touch with the subjects shaping our future.
+Social+Newsletter
TopicsAbout UsContact Us
Copyright ©, Camden Media Inc All Rights Reserved. See our User Agreement, Privacy Policy and Data Use Policy. The material on this site may not be reproduced, distributed, transmitted, cached or otherwise used, except with prior written permission of Futurism. Fonts by Typekit and Monotype.