This would be a game changer for spotting hard to diagnose cancers.

A new test is being developed that could potentially detect cancer earlier than ever before. Not only that, but it may also be able to detect precancerous patients up to 10 years before it would develop. Even more, all of this may be available for about $46!

Professor Gareth Jenkins and his team of researchers at Swansea University, have developed a new way to test for cancer. And all it takes is a finger-prick to get a sample of your blood.

“The test can be likened to a cancer smoke detector because a smoke detector does not detect the presence of fire in our homes but it’s by-product — smoke. This test detects cancer by detecting the ‘smoke’, the mutated blood cells,” Jenkins explained. Mutated blood cells have lost their sticky Velcro-like proteins, making other proteins incapable of attaching to them. 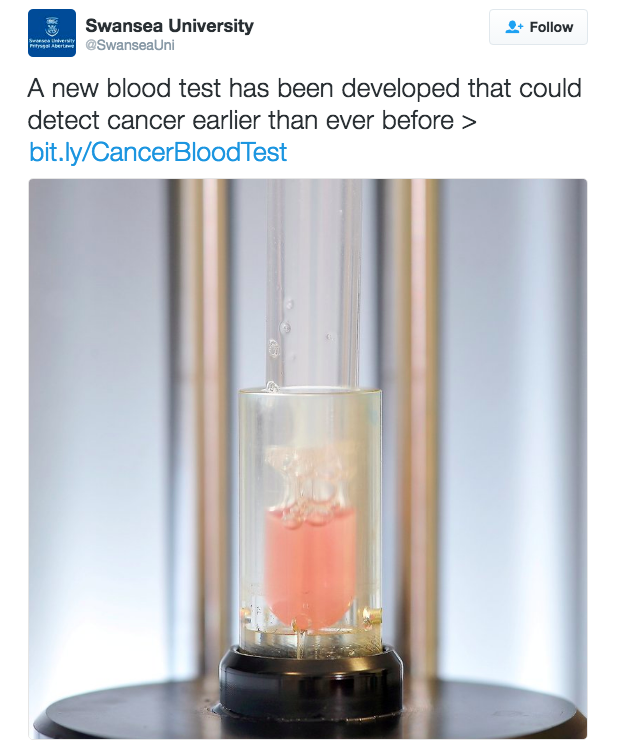 Put out the Fire Before It Burns

Apparently, these mutations tend to manifest themselves very early on in the blood. A healthy person would have some level of mutated blood cells. On the other hand, person who is at high-risk for cancer (or is already in the early stages of one) will exhibit markedly higher levels of mutation in blood. “We found [precancerous] patients do push up a little bit higher towards the cancer levels,” says Dr. Hasan Haboubi. “We know that those patients almost inevitably develop cancer within 10 years.” It must be said that, so far, this test has only been administered to patients with esophageal cancer. Although, this particular cancer was chosen due to it’s survival rates, often the cancer is not diagnosed until it is much too late to treat it.

This blood test to screen for cancer can easily be administered as part of a visit to the patient’s primary care provider. Early detection makes for easier prevention.

As soon as this method is refined for clinical tests, then we may have better chances at fighting the disease before its too late.

Researchers Develop Nanodiscs That Can Wipe Out Tumors