Planarians, Regeneration, and the Medicine of the Future 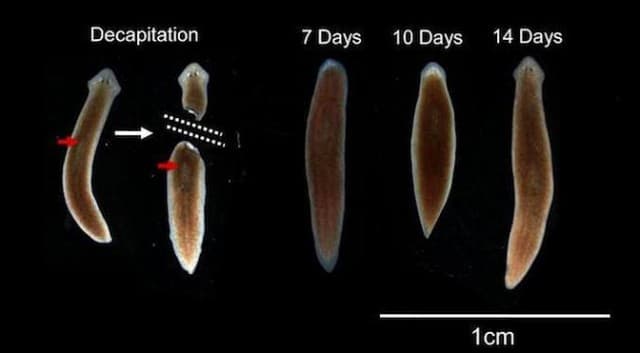 Planarians are rather small flatworms. They typically only reach a half inch (1.3 cm) in length; however, these tiny guys could revolutionize modern medicine.  They can resist bacteria that are highly pathogenic in humans, and they have amazing regenerative capabilities (if you cut one into segments, you will get two creatures!).

They are also unique among invertebrates in that they display addiction-like behaviors to many drugs that are abused by humans. Because of these distinct traits, the planarian is often used as an animal model in neurological research.

Specifically (because of their regenerative properties), researchers believe that studying them could lead to significant advancements in treatment for individuals with brain damage or other neurological diseases.

In his book, The First Brain, Dr. Oné R. Pagán, a neurobiology and pharmacology specialist from West Chester University, discusses how the planarian has played a key role in biological, neuropharmacological, and zoological research (and how it has made appearances in a few unexpected places in popular culture). Ultimately, he shows us why the planarian truly is one of the most extraordinary and influential organisms in scientific research today.

We recently reached out to Dr. Pagán to get his thoughts on these amazing creatures...

From Quarks to Quasars: In your opinion, what is it that makes planarians so unique and worthy of study?

Oné Pagán: Well, I think that the phenomenon of life is remarkable (talk about understatement). We know more of what goes on at the center of a star than about what makes life tick. In this sense, every single species that we can look at on Earth is unique. Recently, planarians are being rediscovered as useful organisms to try to better understand aspects of fundamental biology.

FQTQ: How are they being "rediscovered"? And do you think that there are any specific ways that the renewed focus on planarians could be particularly useful to humanity or to the sciences in general?

OP: Traditionally, planarians were a favorite research subject on regeneration and developmental biology. These are the little critters that we usually associate with regeneration. Many planarian species display this ability. You can cut them up in several pieces and each piece can regenerate into a complete animal. Other organisms have this capacity, but very few of them are more proficient at that than planarians. Moreover, these guys possess a relatively complex nervous system, which can get fully regenerated. It is not a matter of rapid cell division; when uncontrolled, that is cancer. Planarians can regenerate their nervous system relatively fast and with the right structures and connections. Can you imagine how useful would be to unravel this secret? Just think about people with brain damage, from disease or accidents, and the multiple types of neurological diseases that plague humanity.

FQTQ: I’ve always found regeneration simply fascinating, and I think that most other people do as well. So why don't more people know about planarians? What ultimately drew you to them?

OP: Many people are sadly unaware of the true extent of Earth’s biodiversity. One can spend a lifetime just learning about a certain type of organism, and even a lifetime is not enough. That’s why education is essential, if only to make people aware of what is “out there.” I got into planarian research by an indirect route, namely by using them as animal models in pharmacology. As I learnt more about planarians, I became more interested in them in general; the rest is history.

FQTQ: You talk about the importance of education, why do you think that science education is important to the public?

OP: As interesting as it is to do science for its own sake, one has to think about the possible implications and applications of what you discover. This is especially important in our modern society where virtually everything is technological and therefore science-based. What is sad, and a tad dangerous, is that despite the fact that science is all around us and effectively in control of many human activities, relatively few people know what science is and is not, and even less people know how to handle it.

FQTQ: So you are saying that people need to understand science because it is such a pervasive part of our culture. What do you think should be done to increase individuals’ interest in the sciences?

OP: The “coolness” factor is undeniably important. Anything that induces wonder will work to make people interested in science. However, it is important that the public knows and understands that doing science is no trivial matter. Just in the same way that an accomplished athlete learns and practices her sport for years to be successful, scientists sharpen our craft for years so we can do it reliably. That being said, anyone can contribute to science to some extent. Ideally everyone should be able to, and we must convince people that science is not an esoteric matter open only to a selected few. Anyone who is willing to do the work can learn how to do science.

You can learn more about the importance of science, the regenerative abilities of planarians, and how they could revolutionize medicine in Dr. Pagán's book (linked above).

READ NEXT: Meet the Tardigrade, Earth's Most Alien-like Lifeform