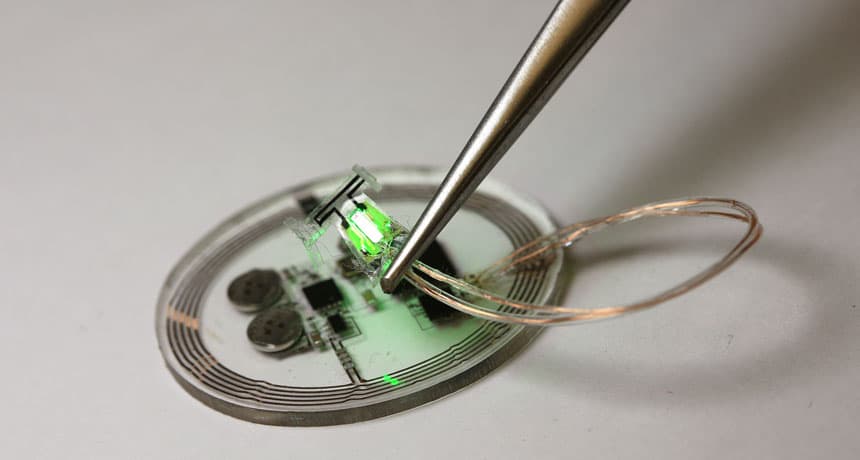 The future of bioelectronic medicine is looking a little brighter thanks to an LED implant which uses light to control nerve cells in the bladder.

A new device which uses light to control nerve cells, a technique known as optogenetics, could offer millions of people improved bladder control. Mice with medically-induced overactive bladders experienced a decrease in their frequent need to pee after they had been implanted with the device, according to research published Wednesday in the journal Nature.

An many as 33 million people in the United States may have overactive bladders. One common treatment method involves stimulating the bladder nerves using implants, but these can often shock more than just bladder nerves and some require frequent doctors visits or an external battery pack.

The new device offers an improvement over these methods, as it charges wirelessly without the need for external batteries. Light emitted from the device also stimulates only nerve cells located in the bladder and only when needed.

Controlling the bladder nerves with light requires an injection of a harmless virus which produces a light-activated protein called archaerhodopsin 3.0, or Arch. A sensor wrapped around the bladder tracks how many times users urinate. If it's more than three times an hour the LED on the implant activates. The green light stimulates the Arch protein in the bladder nerve cells and prevents them from sending so many "full bladder" signals.

Although tests are promising in rodents the devices aren't quite ready in humans. Mice bladders and human bladders are, as you may have guessed, somewhat different. Researchers believe that in humans a red light may be more efficient than a green light because of the denser tissue, for example. It's also possible someone using the device might develop an allergy or reject the Arch protein, causing further issues with faulty bladder signals from nerve cells. More long-term studies will need to be conducted before the implant is ready for humans, but the preliminary results are a glimmer of hope.

12.29.18
Scientists to Test New Cancer Treatment on Human Patients in 2019
12.13.18
Stimulating Muscles With Light Could Soon Treat Paralysis
10.05.17
Harvard's Futuristic "Intelligent Bandages" Can Repair Your Body
8.17.17
Researchers Have Devised a Method to Erase Memories Associated With Fear
8.02.17
AI Is Helping This Anti-Aging Startup Uncover Ways for You to Live a Longer, Healthier Life