In a grim new trend, people around the world are wearing hazmat suits in public. Experts say it's not a great idea. 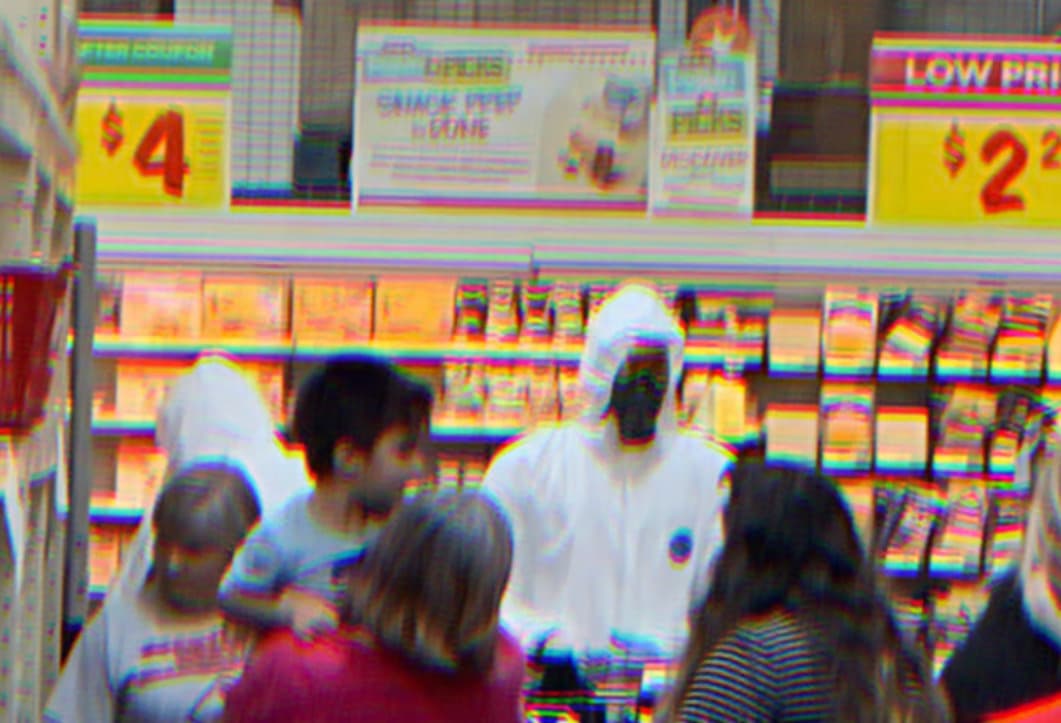 In a grim new trend, people around the world are wearing hazmat suits in public — an apparent bid to avoid catching the coronavirus SARS-CoV-2, which causes the sometimes-deadly disease COVID-19.

"Everyone in the shop was looking at him," a witness told the paper. "I was shocked and so were a lot of people and the staff."

According to local news and social media, more hazmat-clad shoppers have showed up in a Walmart in Maine, Costcos in California and Florida, and supermarkets in Australia and New Zealand. Many more social media users have posted hazmat sightings at stores without specifying a specific location.

In Nashville, one user even uploaded a pic of a man at a rooftop bar wearing a hazmat suit with — yes — cowboy boots.

They might want to dress down, however. Experts say the suits, often called "personal protective equipment" (or PPE), are unlikely to be an effective defense against the coronavirus. Even worse, they say, would be if public demand for the suits created a supply problem for first responders and medical workers.

"There are plenty of sensible distancing strategies one can employ to reduce contact and risk of transmission," said Ashwin Vasan, a professor at Columbia University Medical Center. "This is not one of them."

The bleak trend comes as grocery stores are struggling to keep up with demand as people stock up on supplies as the outbreak spreads.

Tara Smith, a professor of epidemiology at Kent State University, told Futurism that the phenomenon was already on her radar. A Facebook friend, she said, had just posted a photo of yet another hazmat-wearing shopper at a Walmart in the Dallas-Fort Worth area.

"I am very skeptical that people know how to use them correctly," Smith said, adding that without proper training and fitting, it's unlikely that the shoppers are using the suits and masks effectively. "Gloves only protect you if you take them off the right way; otherwise you just contaminate your hands when you remove them. And if the gloves are contaminated and you're touching other objects (like your food products) then you just bring that contamination home anyway."

That tracks with photographic evidence. The man spotted wearing a hazmat suit in New Zealand, for instance, was widely mocked for skipping the gloves, leaving his hands exposed.

Mari Armstrong-Hough, a professor of public health at New York University, said that she's seen even more evidence that members of the public aren't wearing the suits properly. In one photo, she said, she noticed that a hazmat-wearing individual had pulled down his or her mask — using, she pointed out, what was probably an unwashed glove.

"As a general principle," she said, "people not trained in how to use PPE often manage to do little good for themselves, contaminate themselves in the process of removing equipment, and perhaps even increase their risk of exposure by letting down their guard about the important things like maintaining distance and frequent handwashing."

"Of course," she added, speaking of a photo she saw of a hazmat-wearing person in New York, "because it's Brooklyn, I'm not 100 percent sure we can rule out the possibility of performance art."

Even before COVID-19, it was already common in some places for people to wear surgical masks in public. It's not entirely clear whether that technique is effective against the coronavirus, but it's already led to shortages that are ominous during a pandemic.

Now, a number of public incidents during the coronavirus outbreak have pushed hazmat suits further into the general public's consciousness. Supermodel Naomi Campbell, for instance, donned a hazmat suit to Los Angeles International Airport this past weekend.

"It's not a funny time, it's not a humorous time, I'm not doing this for laughs," she said later. "This is how I feel comfortable traveling if I have to travel; I'm trying to keep it to a minimum."

Before Broadway shut down because of the virus, a prominent ticket seller offered an ominous disclaimer that audience members should wear hazmat suits in "any crowded venue in NYC during this pandemic."

Even more bizarre was an incident this weekend in which a hazmat-wearing man entered a Las Vegas Walmart and started spraying items with an "unknown substance" before being apprehended by police.

Priya Duggal, the director of the genetic epidemiology program at the Johns Hopkins Bloomberg School of Public Health, told Futurism that he interprets most people wearing hazmat suits in public as "seeking attention."

"Practicing good social distancing techniques including avoiding large gatherings, simply washing hands, and limiting contact with others should be enough to decrease transmission of COVID-19," he said. "It’s not perfect, but it does work. Wearing a hazmat suit may also work but it's potentially creating a false sense of security for the individual while increasing anxiety in those around them."

Armstrong-Hough, though, was more circumspect, framing the public hazmat sightings as a symptom of widespread fear and poor communication from authorities.

"On the other hand, if you're, say, a patient in treatment for cancer without family nearby and you need to go buy orange juice, New York must feel like a scary place right now," she said. "To me, the social-political angle is important here. How have we reached a state of such uncertainty that people are suiting up to traverse Brooklyn? Poor messaging from political leaders, slow roll-out of testing, and whiplash policy changes have injected unnerving uncertainty into people's daily lives."

"As ordinary people struggle to sort out their risk and responsibility in pandemic," she said, "maybe it's not surprising that some people are going to extremes."