There's Something Fishy About the Teletubbies' Vaccination Cards

Did they forge their documents? 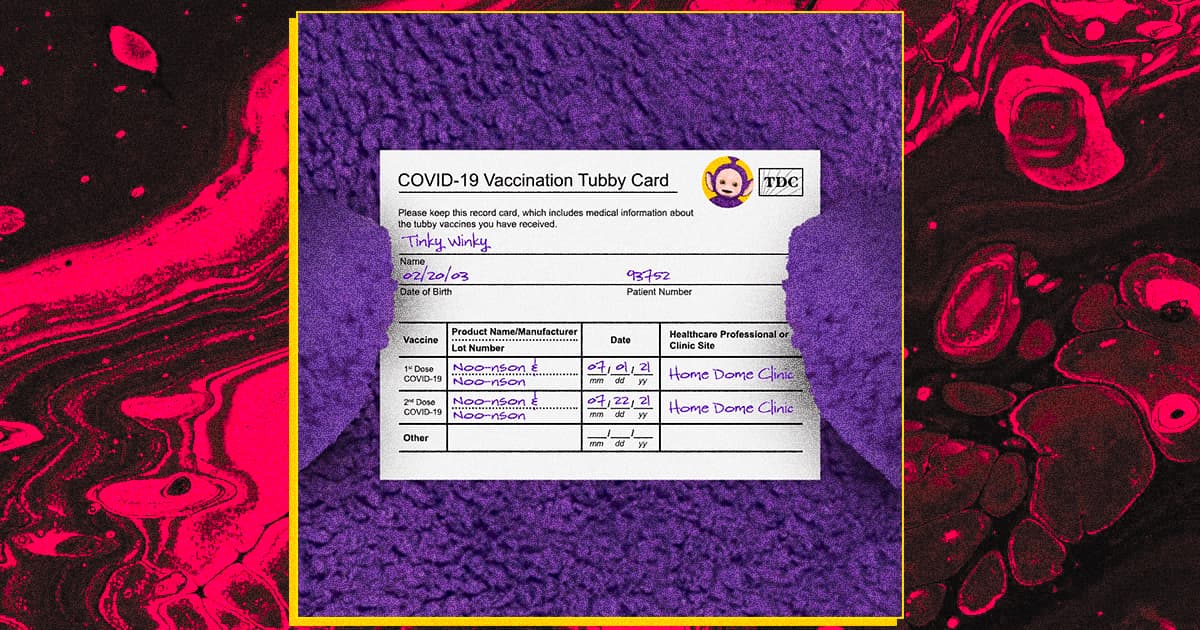 The Teletubbies — the nightmare half-baby-half-television creatures from your childhood — are all vaxxed up and ready for a wild summer, according to a bizarre tweet from the TV show's brand account.

"We're all vaxxed!" the tweet reads. "Just in time for a Tubby hot summer. Who's ready to come out and play."

It's eyebrow-raising, if not mildly off-putting, that beloved children's television characters are getting in on the "hot vax summer" trend. But accompanying the tweet are images of all four 'tubbies holding up their vaccination cards — not unlike the selfie you probably took after your own jab — and something seems off.

We’re all vaxxed! Just in time for a Tubby hot summer ☀️ Who's ready to come out & play pic.twitter.com/AtXTExaCMs

We're not talking about how they got shots manufactured by companies like "Noo-nson & Noo-nson" and "AstraTubbica" or that there seems to be a health agency in the world of Teletubbyland with the inscrutable acronym "TDC" — Teletubbyland for Disease Control and Prevention?

No, we're more curious about the fact that all four Teletubbies seem to have told their local vaccine-doling pharmacist that they were born on February 20, 2003 — nearly six full years after the first episode of the TV show aired.

Also, all four Teletubbies claimed that they got their second shot on July 22, 2021, a date that astute readers will note has not yet arrived.

All of this raises important questions. Like "Do the laws of space and time apply to the Teletubbies as they do us mere mortals?"

Or perhaps "Did the Teletubbies forge their vaccination cards so they could book a flight out of their bizarre, fever-dream meadow home?" If so, why would they be so bold as to broadcast the evidence of their particularly selfish crime to all 33,400 of their Twitter followers? Have they no shame?

Oh dear god, during the time I spent writing this article, the Teletubbies Twitter account announced that they vaccinated a sentient vacuum. I'm sorry, my brain has short-circuited and the article will end here.

As of this article's publication, the Teletubbies brand account has not responded to Futurism's questions.