Voyager 1's last postcard from interstellar space will reach us by 2040. 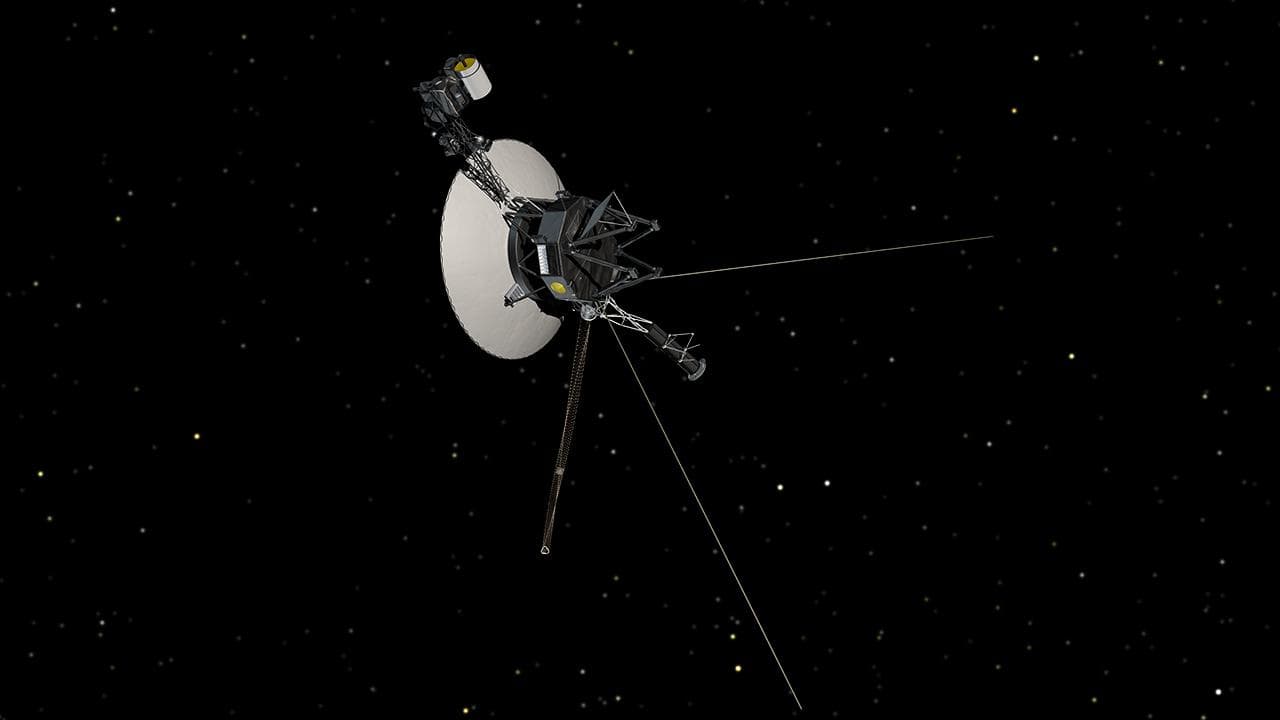 NASA's Voyager spacecrafts were initially launched in 1977, and 40 years later, NASA can confirm that both Voyager 1 and Voyager 2 are still functioning and making their way through space. Neither is showing any signs of slowing, and it's unlikely they'll need to be shut down anytime soon.

Everyday, the pair of spacecrafts send information back to NASA regarding the conditions of their current locations, which includes areas where our Sun has minimal to no influence. Voyager 1, which is 13 billion miles away from Earth, travels through interstellar space, moving northward out of the plane containing our planets. Voyager 2, meanwhile, is 11 billion miles away from Earth, and moving southward.

Both have seen a lot over the years, including Voyager 2's flyby of the four outer planets — Jupiter, Saturn, Uranus, and Neptune — volcanoes on Jupiter's moon Io, an Earth-like atmosphere on Saturn's moon Titan, and geysers of icy cold nitrogen on Neptune's moon Triton. Voyager 1 was the first to reach interstellar space, and is currently the only spacecraft to do so, though Voyager 2 is expected to do the same relatively soon.

“I believe that few missions can ever match the achievements of the Voyager spacecraft during their four decades of exploration,” said Thomas Zurbuchen, associate administrator for NASA’s Science Mission Directorate (SMD) at NASA Headquarters. “They have educated us to the unknown wonders of the universe and truly inspired humanity to continue to explore our solar system and beyond.”

Thanks to the two probes and their opposing trajectories, NASA scientists have been able to gather invaluable information on the heliosphere — the bubble of solar wind containing our system's planets. When Voyager 2 reaches interstellar space within the next few years, scientists will be able to see how the heliosphere interacts with the interstellar medium from multiple locations simultaneously; this medium being a region in which the magnetic field is being affected by nearby solar wind. The existence of this medium was first noticed by NASA in 2015, three years after Voyager 1 made it to interstellar space.

Read This Next
So Long
Tragedy! NASA Says the Voyager Space Probes are Powering Down
Futurism
After the Moon and Mars, NASA Wants to Head to Alpha Centauri in 2069
Futurism
Voyager 1 Just Fired Its Thrusters for the First Time in 37 Years
Futurism
NASA's Twin Voyager Probes Are the Most Important Spacecraft Ever Launched
Futurism
A Newly Proposed Space Mission Could Unlock the Mysteries of the Universe
More on Off World
Drama Bomb
Yesterday on the byte
European Space Agency Halts Plans to Send Astronauts to Chinese Space Station
Futurism
Yesterday on the byte
Asteroid Mining Startup About to Launch First Mission
Carry On, Wayward...
Yesterday on the byte
NASA Says Lucy Spacecraft Will Forge Ahead With Busted Solar Array
READ MORE STORIES ABOUT / Off World
Keep up.
Subscribe to our daily newsletter to keep in touch with the subjects shaping our future.
+Social+Newsletter
TopicsAbout UsContact Us
Copyright ©, Camden Media Inc All Rights Reserved. See our User Agreement, Privacy Policy and Data Use Policy. The material on this site may not be reproduced, distributed, transmitted, cached or otherwise used, except with prior written permission of Futurism. Articles may contain affiliate links which enable us to share in the revenue of any purchases made.
Fonts by Typekit and Monotype.