Round Trip
May 18 by Victor Tangermann
Round Trip
/Off World

Here's what a 30 day stay on the surface of Mars could look like.

/ Off World/ Artemis/ Mars/ NASA
May 18 by Victor Tangermann 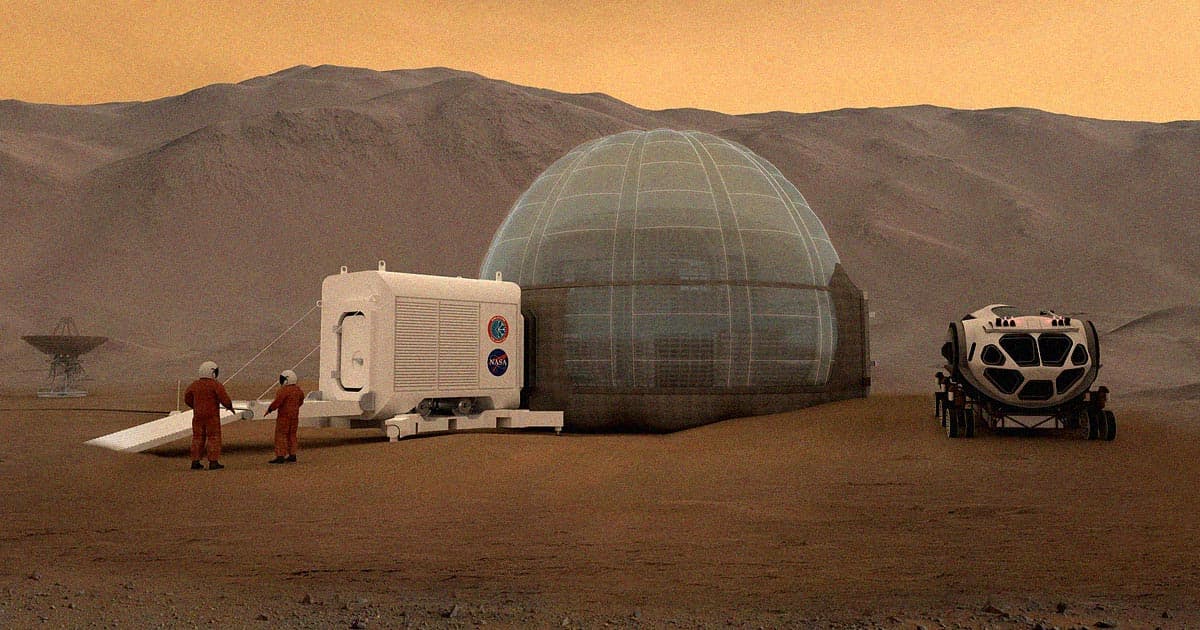 During a high-level talk on NASA's objectives for human space exploration, we got an early glimpse of what a 30 day crewed mission to the surface of Mars could eventually look like.

It's an exciting prospect that, while many years if not decades away, shows the agency's commitment to fulfilling humanity's dreams of setting foot on the Red Planet for the first time in history.

NASA director of space architectures Kurt "Spuds" Vogel outlined what such a mission could entail. The agency is envisioning a habitat spacecraft to make the months long journey there, which uses a hybrid rocket stage that combines chemical and electric propulsion.

Two crew would remain in orbit while a further two would visit the surface of Mars. The latter would have access to supplies sent to the surface beforehand via a 25-ton Mars lander, providing surface power and mobility, as well as a fueled up pre-deployed crew ascent vehicle to get them both back into orbit later.

To actually spend up to an Earth month on the desolate Martian surface, Vogel suggests the two crew members could live inside a pressurized rover that would provide habitation and allow them to complete scientific objectives as well.

"Our assumption here is the crew will be deconditioned," Vogel said during the talk, "and we'll need as much time to adapt to the partial gravity."

Gravity on Mars is only roughly a third of that on Earth.

"So we want to maximize the science so we allow them to drive around before they become conditioned enough to get in the space suits and walk and maximize that science in 30 days," he added.

Unsurprisingly, Vogel and his team concluded that 30 days on the surface was far more feasible, given the astronomical amount of logistics and costs involved.

NASA is hoping to take what we will eventually learn from exploring the surface of the Moon and apply it to spending time on the Martian surface.

But before any such missions kick off, the space agency has a mountain of work ahead of it. NASA is only starting to gear up to launch its Artemis I mission, an uncrewed trip around the Moon and back, with a maiden voyage of its SLS rocket and Orion spacecraft scheduled later this year.

From there, NASA is planning to establish a more permanent presence on the Moon, the Lunar Gateway, as a stepping stone to transfer astronauts down to the surface, and eventually develop the Transit Habitat, a conceptual spacecraft meant to house astronauts on their much, much longer journey to Mars.

In other words, it could be a very, very long time before we get a more concrete idea of what a crewed journey to the Martian surface could actually look like.

But the space agency is clearly doing its homework, and is now seeking input and feedback on its ambitious timeline.

Read This Next
So Long
Tragedy! NASA Says the Voyager Space Probes are Powering Down
Expect Delays
Scathing Report Admits NASA Is Years Behind Moon Landing Schedule
Uh Oh
Something Very Bad Might Be About to Go Down at NASA
Astronaut Drip
We Just Got the First Peek at NASA's Artemis Moon Landing Suits
Moonwalk Drip
NASA Inks Deals for Moonwalking Suits for Artemis Landings
More on Off World
Going Down
Jun 25 on the byte
Scientists Say the Sun Is Acting Up and Causing Satellites to Fall Back to Earth
Target Practice
Jun 24 on the byte
NASA Spots Location Where Derelict Rocket Smashed Into the Moon
Fly Already
Jun 24 on the byte
SpaceX Finally Lifts Super Heavy Booster Using Giant Robot Arms
READ MORE STORIES ABOUT / Off World
Keep up.
Subscribe to our daily newsletter to keep in touch with the subjects shaping our future.
+Social+Newsletter
TopicsAbout UsContact Us
Copyright ©, Camden Media Inc All Rights Reserved. See our User Agreement, Privacy Policy and Data Use Policy. The material on this site may not be reproduced, distributed, transmitted, cached or otherwise used, except with prior written permission of Futurism. Fonts by Typekit and Monotype.