Would bling made of these be the biggest flex in the solar system? 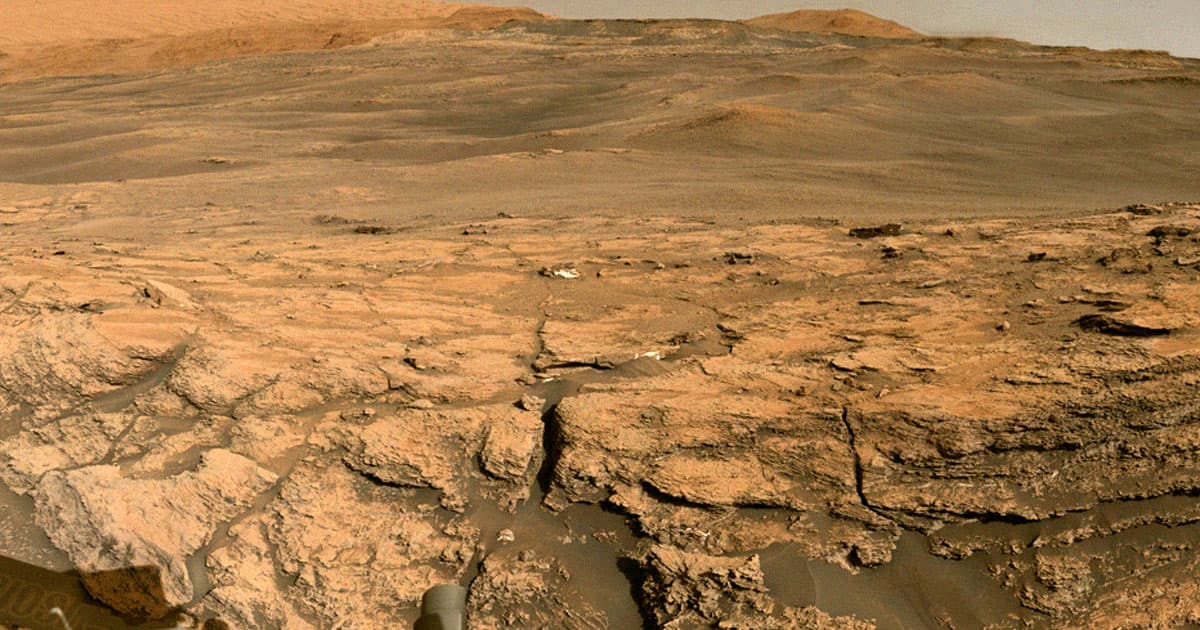 Scientists believe they've discovered a cache of gemstones on the surface of Mars.

No, we're not talking about diamonds — according to a study published last month in the Journal of Geophysical Research: Planets by a team of Arizona State University and NASA-affiliated researchers, the Red Planet's Gale Crater is teeming with opals.

Let's get it out of the way: bling iced out with precious gems from another planet sounds like the coldest flex in the solar system. But there's also scientific significance to the finding, which suggests that the area held vast reserves of water far more recently than we previously thought. That means the discovery could also force us to rewrite theories of ancient life on Mars.

Over the last couple of years, researchers have found "fracture halos" of lighter-colored rock in images taken by NASA's Curiosity rover, which they suggest are likely largely made out of opal, a bluish hydrated mineral.

But now it turns out these buried riches appear to be far more abundant than previously thought, according to the new research, and can be found all over the Gale Crater, an expansive ancient lake bed that Curiosity has called its home for the last decade.

"Our new analysis of archival data showed striking similarity between all of the fracture halos we've observed much later in the mission," said lead author Travis Gabriel, postdoctoral fellow at Arizona State, in a statement. "Seeing that these fracture networks were so widespread and likely chock-full of opal was incredible."

The discovery is particularly intriguing considering that opals are formed when silica are dissolved in water. Subsurface regions of the crater may have once sheltered life from the harsh temperatures and radiation at the surface — long after much of the water had already disappeared from the planet's surface.

"Given the widespread fracture networks discovered in Gale Crater, it's reasonable to expect that these potentially habitable subsurface conditions extended to many other regions of Gale Crater as well, and perhaps in other regions of Mars," Gabriel said in the statement. "These environments would have formed long after the ancient lakes in Gale Crater dried up."

Instead of eventually making their way into the extraterrestrial bling, these gems might even end up serving a far more important purpose. Since the water and silica that make up opal can be separated relatively easily, they could potentially serve as a crucial source of water for future astronauts walking the Martian surface.

In fact, a single three-foot section of fractured halo can release roughly 1.5 gallons of water within the top foot of the surface, something the researchers were able to demonstrate in experiments.

In short, the opal dates back to an entirely different period of time in Mars's history, suggesting that several other unexpected regions of the Red Planet may still be teeming with water to this day — a tantalizing prospect for future astronauts.

Read This Next
Shoo
Scientists Warn Giant Asteroid Is Actually Swarm, Nearly Impossible to Destroy
Moon Wrestling
The Head of NASA Is Scared Chinese Astronauts Will Seize Portions of the Moon
Shot Well
Head of NASA Relieved to Hear Elon Musk Isn't REALLY Running SpaceX
Little Boxes
One Silly Little Detail Is Reportedly Delaying Artemis II by Years
Martian Oases
Scientist Proposes Growing a Forest Inside a Bubble on Mars
More on Off World
No More Hops, Mor...
Yesterday on the byte
Suggestion: NASA Should Make Its Mars Helicopter Do Some Gnarly Tricks From "Tony Hawk"
Exoplanet Dance
Tuesday on the byte
Scientist Releases Amazing Video of Exoplanets Orbiting Distant Star
Space Junk News
Tuesday on the byte
Two Large Chunks of Space Debris Just Almost Collided in an Epic Disaster
READ MORE STORIES ABOUT / Off World
Keep up.
Subscribe to our daily newsletter to keep in touch with the subjects shaping our future.
+Social+Newsletter
TopicsAbout UsContact Us
Copyright ©, Camden Media Inc All Rights Reserved. See our User Agreement, Privacy Policy and Data Use Policy. The material on this site may not be reproduced, distributed, transmitted, cached or otherwise used, except with prior written permission of Futurism. Articles may contain affiliate links which enable us to share in the revenue of any purchases made.
Fonts by Typekit and Monotype.