The waiting is finally over. 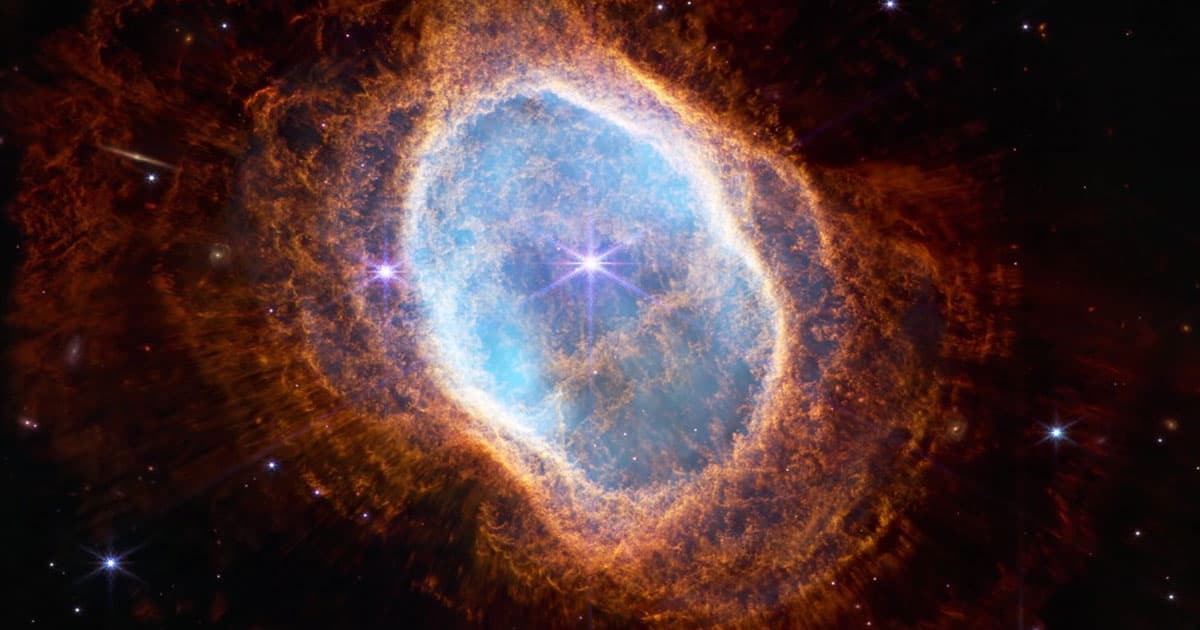 The wait is officially over. NASA has released the long-awaited first set of images taken by its uber-expensive James Webb Space Telescope — and they're absolutely breathtaking.

During a live broadcast today, the agency showed off the mind-blowing observations, including some of the deepest views of the cosmos we've ever seen, a groundbreaking moment in the field of astronomy that has been decades in the making.

The news comes after NASA announced that it's completed the commissioning phase of the revolutionary space telescope, officially kicking off full scientific operations.

We'll be updating this post as the new images come in.

We already got a glimpse of the Hubble Space Telescope successor's first images during an unveiling of the first-ever image yesterday, the highest-resolution view of the infrared spectrum ever produced. The stunning image shows "just a little speck of the universe," as NASA administrator Bill Nelson explained during the event.

This giant planet is composed mainly of gas, and is about half the mass of Jupiter. It's located about 1,150 light-years away from Earth, orbiting its star every 3.4 days.

It's the first spectrum of a exoplanet taken by the telescope, which are wavelengths of light we've never had access to before, according to Nicole Colón, Webb deputy project scientist for exoplanets.

"We can tell there's evidence of clouds and hazes, but the water features aren't as large as we predicted," Colón explained.

"We don't expect that planet to be habitable (it's too hot, and it's a gas giant, so no solid surface)," cosmologist Katie Mack tweeted. "But there's hope we might observe atmospheres of more Earth-like planets in the future."

"Well this one's a banger," The Atlantic's Marina Koren tweeted.

This planetary nebula is an expanding cloud of gas, shrouding the dying remains of a star. It's roughly 2,000 light-years away from Earth and nearly half a light-year in diameter.

The nebula shows up due to its molecular nitrogen lighting up the gas surrounding the stellar remains. The blue haze is due to hot ionized gas, heated by the leftover core of the star.

This set of five galaxies is an astonishing 290 million light-years away.

There are millions to hundreds of billions of stars inside each galaxy. They are locked in a close, cosmic dance due to their gravitational force.

The galaxies are also in the process of merging, offering us important clues into the evolution of huge structures in the universe.

The image even shows black holes sucking up matter in the center.

This stellar nursery is some 7,600 light-years away in the constellation Carina. It's one of the brightest and largest in the sky.

It's also home to massive stars, several times the mass of the Sun.

The gorgeous infrared image shows hundreds of new stars we've never seen before, including jets of bubbling gases being expelled as new stars are born. Every dot of light is an individual star, which may have individual planets orbiting them as well.

It's certainly not the last time we'll be hearing from the James Webb Space Telescope. These images only represent the very first batch of scientific observations, and we'll likely see countless more stunning views.

"We're going to be doing discoveries like this every week," Rigby promised.

More on the announcement: The First Full-Color James Webb Image Just Dropped, and It's Beautiful

Read This Next
Moon Vacation
NASA Finds Holes on the Moon Where It's Always a Comfortable Temperature
Buh Bye
Russia Says It's Definitely Quitting the ISS But Doesn't Say When Exactly
Pay Up
NASA Seeks Funding to Send Scientists to Space Station
Nightmare Fuel
This Horror Story About the Webb Telescope Will Chill Your Bones
Cosmic
Here's What to Expect From James Webb's First Images
More on Off World
Florida, We Have ...
Tuesday on the byte
Website Selling Moon Mission Launch Tickets Crashed Almost Immediately
Paw Patrol
Monday on the byte
Space Force Sending in Robot Dogs to Patrol a Space Port
A Decade
Aug 7 on the byte
NASA's Curiosity Rover Celebrates 10th Anniversary
READ MORE STORIES ABOUT / Off World
Keep up.
Subscribe to our daily newsletter to keep in touch with the subjects shaping our future.
+Social+Newsletter
TopicsAbout UsContact Us
Copyright ©, Camden Media Inc All Rights Reserved. See our User Agreement, Privacy Policy and Data Use Policy. The material on this site may not be reproduced, distributed, transmitted, cached or otherwise used, except with prior written permission of Futurism. Fonts by Typekit and Monotype.