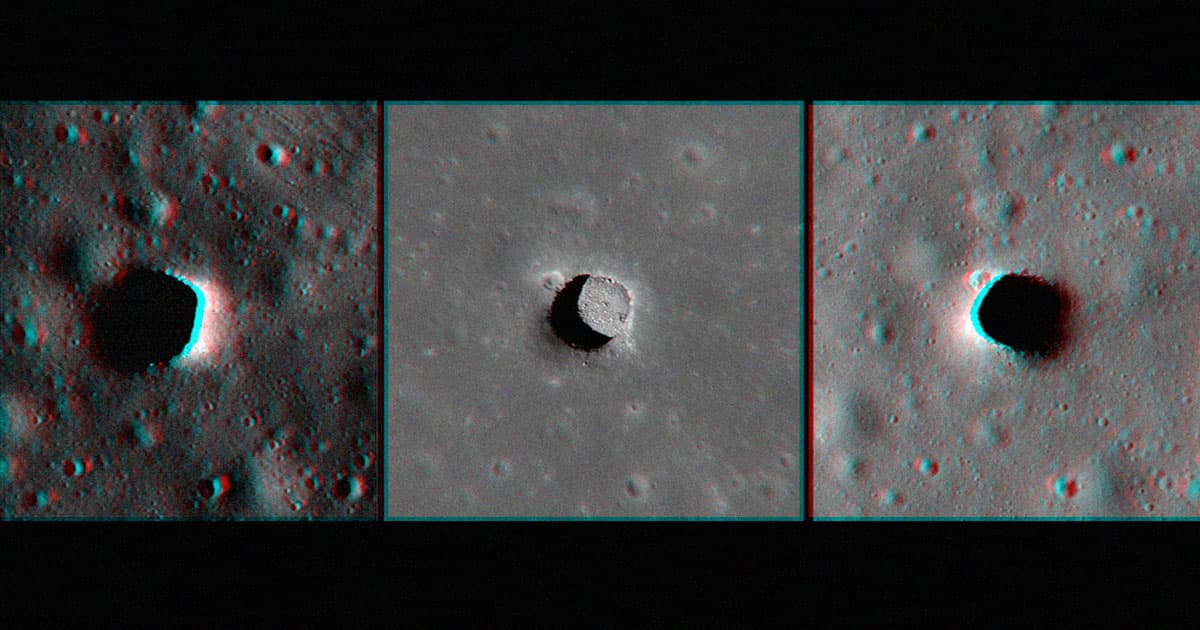 A team of NASA-funded researchers have discovered mysterious "pits" in the surface of the Moon that sit, according to new computer modeling, around a comparatively balmy 63 degrees Fahrenheit.

In other words, these pockets could serve as an excellent place for future astronauts to hang out in, considering temperatures on the lunar surface typically range from a blistering 260 degrees Fahrenheit down to a frosty minus 280 degrees Fahrenheit. The pits could also protect future settlers from micrometeorite showers and the Sun's relentless radiation.

There's also the tantalizing possibility that the pits lead to more extensive cave structures left behind by ancient lava flows, something scientists have suspected for a while but haven't been able to confirm.

"About 16 of the more than 200 pits are probably collapsed lava tubes," said Tyler Horvath, a doctoral student in planetary science at the University of California, Los Angeles, and lead author of a new paper published in the journal Geophysical Research Letters, in a statement.

Horvath and his colleagues used data collected by NASA's Lunar Reconnaissance Orbiter (LRO), which has been taking detailed measurements, including thermal images, of the lunar surface since 2009.

"Lunar pits are a fascinating feature on the lunar surface," said LRO scientist Noah Petro, in the statement. "Knowing that they create a stable thermal environment helps us paint a picture of these unique lunar features and the prospect of one day exploring them."

Scientists are certain that at least some of these pits feature overhangs, with lava tube caves perhaps lurking beyond them. If the theory holds up, the caves could serve as excellent shelter for future settlers — and the pits could be an easy way in.

The team suspects the fact that these pits are shaded from the Sun allow them to be at a steady human-friendly temperature, trapping heat during the night, while protecting from too much heat during the day.

Researchers are already coming up with ways to explore these suspected lava tubes on the lunar surface using robots and drones.

It's a tantalizing glimpse of what it could one day be like to settle the Moon, as these pits may be the best place to look for a place to survive.

"Humans evolved living in caves, and to caves we might return when we live on the Moon," said study coauthor David Paige in the statement.

Read This Next
Putting Things In Perspective
Amazing Artemis Photo Shows Every Human, Alive or Dead, Plus the Moon
Fighting Words
Retired NASA Astronaut Scott Kelly Dishes on Ukraine, Russia, and Moon Mission
Psychological Warfare
Experts Excoriate NASA Report Claiming James Webb Wasn't Homophobic
Big Impact
Meteorite Hit Mars So Hard NASA Thought It Was a Quake
Failure to Launch
Lawsuit Accuses NASA of Widespread Racial Discrimination
More on Off World
TTFN
Yesterday on the byte
Skkrt! NASA's Orion Heads Back to Earth, Leaves Moon in the Dust
Icy Comet Eruption
Yesterday on the byte
Astronomers Spot Volcano Erupting on a Distant Comet
RUD-dy
Yesterday on the byte
SpaceX Rocket Engine Explodes In a Green Blast
READ MORE STORIES ABOUT / Off World
Keep up.
Subscribe to our daily newsletter to keep in touch with the subjects shaping our future.
+Social+Newsletter
TopicsAbout UsContact Us
Copyright ©, Camden Media Inc All Rights Reserved. See our User Agreement, Privacy Policy and Data Use Policy. The material on this site may not be reproduced, distributed, transmitted, cached or otherwise used, except with prior written permission of Futurism. Articles may contain affiliate links which enable us to share in the revenue of any purchases made.
Fonts by Typekit and Monotype.